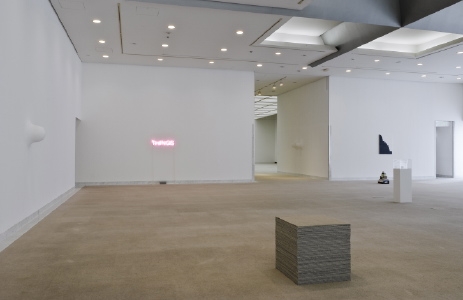 To be honest my first impression, having taken a few steps into the venue, was how well they’d done to bring this exhibition to fruition. It was rather spare, after all. Leading into the show visitors were greeted by the likes of Work No. 100, a simple stack of square carpet tiles; the row of potted cacti in descending height order that constitutes Work No. 960, and Work No. 126, a sheet of A4 paper crumpled into a ball. Those lured by the chance to catch ‘a solo show by an internationally important winner of Britain’s Turner Prize’ might well have felt somewhat perplexed. The offering in the next room would be the decider. Work No. 227 consists simply of lights turning on and off in an empty room. Anyone equating qualities such as the meaning and expressiveness of a piece of art with the amount of time and labor the artist has put into it might feel that Creed had been a little slack, so to speak. But it was startling in a sense to find after a while that this undoubtedly ‘low-density’ show never engendered unease, or felt uncomfortable. The cavernous exhibition space of the museum was suffused with a clearly directed sense of purpose, the atmosphere highly charged. Discomfort became pleasant, then uplifting, embracing the soul. Creed achieves the optimal effect with the barest minimum of subtle method, at the heart of which is a comment on the equality and regularity of all things. In it we find glimpses of a farsighted, almost Zen-like state oblivious to the temptation to add or alter.

Creed’s technique is at once similar to and unlike that of previous minimalist art. While minimalist art sought an objectified beauty in the purification and repetition of form, Creed’s technique could be likened to dropping ink into water. Dispersing, the ink acts on the ‘place’. Works that appear to have been basically plonked in a corner of the space form relationships with all that encounters them: viewers, space, society, ethical norms, and the values of art; affecting their meaning. This is achieved not through physical transformation of the space, but by the audience consciously accepting the artist’s summons, and under its influence, accepting themselves just as they happen to be, where they happen to be. And happily, the experience is suffused with a gentle calm and beauty, making it extremely pleasant. Frankly I find the existence of subjects capable of appreciating Creed’s art (both those on the receiving end such as viewers, and those on the ‘giving’ end, such as the museum and media) something worthy of celebration. The curatorial team at the Hiroshima City Museum of Contemporary Art are to be greatly commended for bringing this exhibition to Japan.