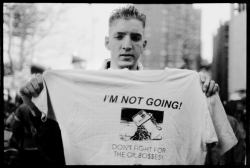 In Ai Weiwei’s black-and-white photograph, Bleeding Protestor. Tompkins Square Park Riots, the rivulets of blood streaking down the face of a pony-tailed man, darkening his T-shirt in a spreading stain, look more like experimental ink wash than police brutality. Yet the outraged glare, the mouth cocked in mid-chant and the fury or quiet horror of his fellow protestors is anything but artifice. These men and women are for real. It is 1988 and this riot is the culmination of months of tension in New York City over the rights of the urban poor to shelter. The park had become a magnet for homeless people, and after each police roust, the legions of hungry, tired and poor would re-encamp in ever-greater numbers, supported by a vocal coalition of progressive citizens disgusted with the go-go 80s’ shameless, selfish materialism, gentrification and disregard for those unwilling or unable to ascend the social ladder. When protestors ignored the police curfew, the officers responded with indiscriminant violence, and the once-peaceful protest ignited into a raging riot that drew condemnation of police brutality across society.

If the cliché that a picture says a thousand words has any meaning, that meaning is affirmed by and grounded in the rhizome of history, the spreading roots of which come together and form a network of associations at the site of the image. Ai Weiwei’s gift – illuminated by the impressive array of hundreds of photographs taken during his sojourn in the New York East Village, and selected from over 10,000 images archived by Three Shadows – is the keen sense of social and cultural acuity that, even as an outsider, enabled him to capture seminal moments that root an image in the dense, chaotic network of meanings, ideas, conflicts, struggles, aspirations, and contradictory values that embody the lifeworld of a particular place in time. Images of glorious, bouffanted drag queens reinventing Diana Ross’ legendary I’m Coming Out during Wigstock 1990 root us into an emerging gay rights movement that is still one of the major civil rights issues of our time. The specter of homeless people sleeping beneath lucrative, commissioned public art works speaks of the contradictions in an economic system rooted in unsustainable, endless consumption (until that consumption comes to a sudden end and we find ourselves where we are now). And the protests against the first US Gulf War in 1990 remind us of the presence of the past in our shared present and future.

Maya Kóvskaya is a Beijing-based art critic and curator.
[This review appears also in ART iT No. 23 Spring 2009]