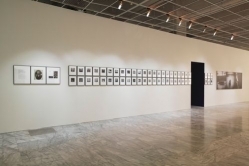 The Taipei Arts Awards – considered the stepping-stone to success for newcomers in Taiwan – seemed to be searching for a fresh methodology after last year’s exhibition, with museum staff holding interviews in various quarters among other things, but this year there appear to be no significant changes in the judging process. At 28, the number of artists selected was some 20 to 30 percent up on the average, with five receiving Awards and five honorable mentions. Entries were received from 386 artists, whose average age has continued to fall, dipping below 30 years for the first time. Two-dimensional pieces, including digital photography, reportedly made up more than half of the total entries, although the number of such works selected was less than in the average year. A feature this year was that out of the works that received Awards or honorable mentions, as many as six were video works, while only two made no use whatsoever of digital technology. Works dealing with social themes were also conspicuous among the winners, although according to one of the judges, artist Tsong Pu, this was likely due to the personal preferences of the judges, as only a minority of the total entries dealt with such themes.

Of the winners, Wang Ting-yu’s Moo-vei Rinpoche’s Psychic Shoot – Final Scenery was probably the most refreshing. The work consists of a series of psychic photographs taken by a fictitious psychic, with various people’s dying words accompanying the black and white photographs of the places where they met their death. Of particular interest was the willingness to deal with the issue of death, something rare among young Taiwanese artists. Hsu Chia-wei’s video installation was also a work of a type not often seen here. An interesting balance was achieved between the high quality footage on the theme of the artist’s own grandmother’s memories of World War II, the space adorned with pure white decorations, and the light treatment. Lin Kun-ying’s interactive work also commanded interest with its near-future storyline, but unfortunately it was treated as a plaything by younger members of the audience and ended up being completely wrecked within days of the show opening.

As is the case every year, nearly half the works evoked a sense of déjà vu, having already been shown at the MOCA Studio, a space for emerging artists, or at other exhibitions. One can’t help feeling that the placings are decided on the basis of some kind of preestablished harmony with little regard to the artistic merit of the works themselves. This made me wonder if the entries couldn’t be limited to works not yet made public. As well, as pointed out by Tsong when he noted that he “hadn’t seen a sculptural work in the Taipei Arts Awards for years”, the bias towards video and digital art among contemporary art, which ought to be more pluralistic, is also a problem. All the more because these awards will influence the attitudes of future emerging artists, perhaps there could be a bit more diversity.

Iwakiri Mio is a Taipei-based art writer and researcher of Taiwanese contemporary art.
[This review appears also in ART iT No. 23 Spring 2009]