by Uchida Shinichi (ART iT) 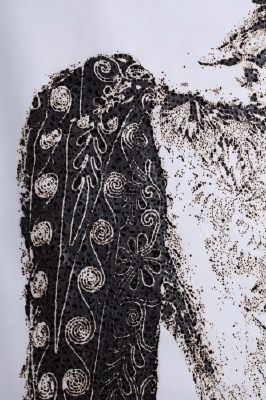 Anyone coming across these works with no prior knowledge could be forgiven for being unsure of exactly how they are ‘painted’. Ichikawa’s works are made by scorching paper using the delicate flame and mild heat produced by burning incense sticks.

Ichikawa has roamed the world ever since reportedly traveling to New York alone at the age of 13 wearing tobifuku (the distinctive clothing, including extra wide pants, worn by people who work on tall structures and scaffolding in Japan). All of his works stem from recollections of his own experiences, although they are more than just reproductions of memories. Images of the wind instruments played by the musicians in the club downstairs that came into his head as he lay in the attic above, which was his home in New York. Strange memories concerning the two prostitutes and two rooms he encountered by chance in an old castle in France where he sought refuge one night. And so on and so forth. Images spun from these and other memories come together in the form of the holes and burn marks made in the paper by the incense sticks.

Although he also dabbles in other media such as sculpture and video, for the time being these incense stick works are what he ‘most wants to show’ in the sense that the results most closely resemble the kinds of images he himself is seeking. According to Ichikawa, just as there are many different kinds of pencils and brushes, he is currently experimenting with various kinds of incense sticks. He doesn’t sketch anything on the paper in advance, preferring instead to apply his brush – correction – his incense stick to clean sheets of paper.

The results can resemble anything from beautiful lace to wormholes, and can even evoke memories of the ‘invisible ink’ writing we all attempted as children in art class. Their fineness contrasts beautifully with the thrilling life and carefree character of the artist. However, Ichikawa’s work is clearly a world away from nostalgia. The somewhat indefinable appearance the works take on when one looks at them closely and then steps back and glances at them again in the context of their surroundings is tinged with an almost crawling eeriness, as if the works are metamorphosing into something else while feeding off one’s memories. Perhaps this is not unrelated to the artist’s approach of creating images by burning and scorching, or in other words through destruction.