We canvassed the ART iT writer/official-blogger contingent asking them to name their five favorite shows – in any part of the world – in 2009. Here we present the lists of the 24 who responded, with comments where these were included.

*unnumbered lists in no particular order

Araya Rasdjarmrearnsook: In this Circumstance, the Only Object of Concern is the Betrayal of the Moon
Ardel Gallery of Modern Art (Bangkok, 2009.3.10 – 4.10)

Perception and Urban Environments exhibition was well executed overall, but I include it for one specific work: Maebayashi Akitsugu’s metronome piece (2003-2009). Nestled into a side room at TWS’ Hongo location, a simple set up of a table, a radio, a metronome, a cube, a light and a set of headphones made for one of the most personal, intense art experiences of the year. Slip on the headphones and the sound of the metronome splits in two – the ticking of the one in front of you and that of the virtual one playing in your ear. With metronome piece, IAMAS Maebayashi created an artwork that felt like a song – and one that intimately played for you alone.

Any exhibition at magical, ARTROOM (Tokyo)

magical, ARTROOM truly provided the unexpected in contemporary art in Tokyo. Consistently taking aesthetic risks, few galleries have as regularly surprised, confused and sometimes shaken me as magical did with it’s exhibitions of young Japanese artists. Though the Ebisu location may have closed down, I look forward to seeing how the magical spirit continues.

The Mori does crowd-pleasing blockbusters, and once you accept that, you have to admit it does them well. While Chalo! India and Ai Weiwei were excellent (the second perfectly cool for summer), ‘The Kaeidoscopic Eye was a fantastic education in the Big Art swirling around Europe. Where else would you see such a selection of installations by Carsten Holler, Olafur Eliasson, John M. Armleder and more all together? And then, add to that the realization that this is all from a single collection of art. Some may say that the time for such works may have passed, but there is a power in their ambitions
nonetheless, and one that will reach far beyond the art world.

I remember being baffled the first time I saw Kimura Yuki’s work at
YOU MAY ATTEND A PARTY WHERE STRANGE CUSTOMS PREVAIL in 2006. I am still baffled in 2010, but I feel now like I am a little bit in on the joke. Though many think of Taka Ishii as a ‘photography’ gallery, when they aren’t presenting Araki and Moriyama, shows like Kimura’s and Elmgreen and Dragset’s fun 2009 exploration Supermodels make it obvious that they are much more conceptual than that. For an artist like Kimura, the photograph is just the start, and the end is both the objects she crafts from those inspirations, and the loose thoughts they leave in your mind.

Almost seventy artists together in an abandonded building, doing what they want. No Man’s Land was rough, uneven, surely complicated to
pull off (government interests, commercial interests, artistic interests all in the same pot!) and glorious for all that. Physically, the space felt like one of the most dangerous ones I have been in this uber-safe city of Tokyo – it felt like a place where once again there were possibilities to explore. Congratulations to the French Embassy for taking a risk and opening their doors to the artists.

Of course there was much more to like in Tokyo in 2009, so here are a quick four more:

Umeda Tetsuya: Science of Superstition at Ota Fine Arts – What a mess! What a clattering, compelling, out-of-control mess!

The Winter Garden at the Hara Museum did such a good job of embodying its central idea of embracing the ephemeral that the exhibition has almost already slipped my mind like Yagi Lyota’s melting records of ice. But Izumi Taro’s playful video installations still live brightly on.

Former Tokyo City Opera Art Gallery curator Iida Shihoko pulled off a masterpiece with her installation of KonoikeTomoko’s body of work. This was exhibition as story-telling and psychological exploration.

The first Daiwa Foundation Art Award kindly brought us Marcus Coates’s show at Tomio Koyama, an installation of his Dawn Chorus (2007) and the piece that surprisingly won him the award: a video of two male tortoises failing to have sex. While the second was both human and alienating, the first was an easier to digest new view on mankind. I wouldn’t be surprised to see Coates shortlisted for the Turner Prize this year

You can’t help but admire Kitagawa Fram’s huge ambition, as well as the earnest philosophy behind it. Plus I had a wonderful two days in the Niigata countryside.

Japanese work is at the forefront of a global wave of stitchwork and new craft. Absolutely gorgeous work in a gorgeous setting by all the artists, and especially Murayama Ruriko and Takemura Kei.

Proving that the Asian art boom is not all hype. Masterfully put together selections and juxtapositions by curator Kuroda Raiji, in this underrated museum.

I didn’t write about this one, but it was a thrill to see so many of the original ‘Nasubi Gallery’ milk box works as well as getting a tour around Ozawa’s world from curator Kamiya Yukie.

The rest of the show was indifferent, but Daniel Birnbaum did everyone a service with this one room recreation of a famous installation from the Stedelijk Museum Amsterdam, itself a recreation of the famous (but nearly forgotten) park performances in the 1950s by the Gutai gang in Kobe. 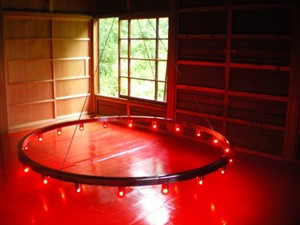 Claude Lévêque: In silence or in noises 2009 at Echigo-Tsumari Art Triennial 2009

Note: Galleries, museums and curators tend to bring out their best during the Art Fair and even though this year’s Shanghai Contemporary (art fair) was downsized and much less international then in previous years,

A Yang Fudong solo exhibition of recent works. The highlight was a feature length fictional non-linear film that provided both a critique and poetic romanticizing of ‘old shanghai.

Curated by Biljana Ciric it was the most extensive to-date documentation of the Shanghai art scene. Some 50 artists, curators and gallerists contributed making it a large compilation of performances, early artworks, lectures, texts and other happenings, which shaped the city during the past three decades.

Organized mostly by Shanghai-based artists, who participated as well. The eclectic show exhibited more than 40 artists with mostly new works from every media. The launch party in a warehouse/empty development in the outskirts of Shanghai was filled with the music, video and the entire Shanghai art scene.

Six Belgian and six Chinese artists build illusory spaces for the visitors using video and computer installations. Limited budgets and loss of funding limited the works that could be brought from Belgium but the show still provided a small glimpse of Belgian new media giants such as Hans Op De Beeck and David Claerbout and China’s emerging new media scene.

Left: Waiting for Video: Works From the 1960s To Today 2009, The National Museum of Modern Art, Tokyo
Right: Takashi Kuribayashi: What Game Shall We Play Today 2009, Performance at KIMUSA, Photo SAMUSO