Mercurial Unfolding is a collaboration between the artist known as the ‘fog sculptor’ and an architecture group of self-proclaimed experimental architectural vision. At last year’s Yokohama Triennale the setting for their joint effort was a corner of a Japanese garden; this installation was located in the courtyard of L’Institut Franco-Japonais de Tokyo. 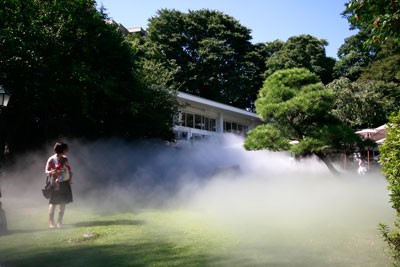 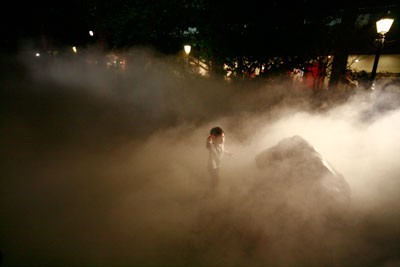 Two meteorological sensors were placed in this grassed area covering some 300 square meters. These recorded environmental data such as wind speed, wind direction, temperature and humidity, and controlled a set of nine nozzles to shoot out fog in realtime. The software was actually configured with ‘a virtual target resembling a drop of mercury’ moving through a hypothetical garden according to the direction and strength of the wind. When the target approached a nozzle, this tripped the nozzle switch, releasing a stream of fog. 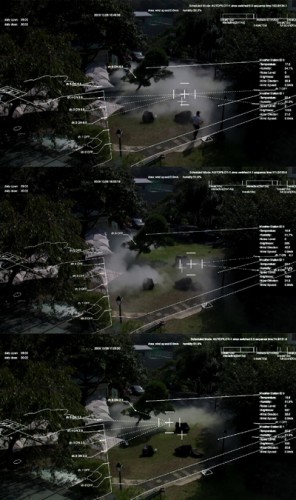 According to Ichikawa Sota, head of doubleNegatives Architecture (dNA), “We discussed in depth with Nakaya-san matters such as interactivity with the environment and adjusting the ‘effect’. For instance, to make fog disperse attractively you need to insert several breaks in the 10-20 minute loop unit, and the lengths of these breaks were empirical values provided by Nakaya-san.” The slight gradient of the venue and the associated changes in wind patterns combined to create a mesmerizing dreamscape that never palled. 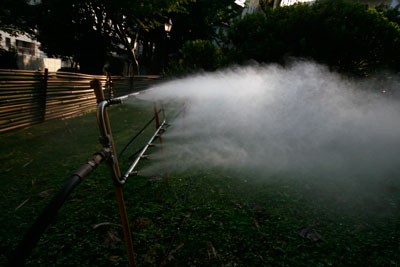 dNA have since their inception focused on constructing autonomous generative systems that are bottom-up rather than top-down, and exploring applications for these systems in architecture and urban spaces. Nakaya, daughter of a scientist known for his study of snow crystals and as the first person in the world to make artificial snow, presented her first manmade fog creation at the 1970 World Expo in Osaka. The term bottom-up autonomous generative system refers to systems such as schools of fish or flocks of birds that alter their shape as they move in the manner of a single organism, or the way in which cells during early gestation divide into the likes of skin, internal organs and muscle, differentiating between self and other, via the exchange of information through proteins. Thus in this case, human simulation of a natural law is performed in an extremely stratified manner through collaboration with an artist. 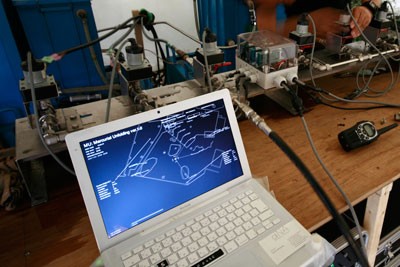 Unlike cities such as London and San Francisco, Tokyo has little association with fog. It is in such a city, moreover in the blazing sunshine of broad daylight, that these wispy white clouds suddenly appear. Savoring a brief moment of beauty in ephemeral form, and contemplating the connection between natural and artificial, was a rare experience.

*Nakaya Fujiko: ‘Fog sculpture to mark 28 years of playing with fog’ at the Miyagi Museum of Art
24 – 27 November: Members of the public invited to watch installation setup
28 November – 13 December: On display
http://www.pref.miyagi.jp/bijyuTu/mmoa/ja/exhibition/20091124-s01-01.html