The small industrial city of Linz is the unexpected venue for the most important event in the New Media Art calendar: the Ars Electronica Festival. This year celebrating its 30th birthday, the five-day festival attracted 72,500 people to exhibitions staged in various locations around the city. 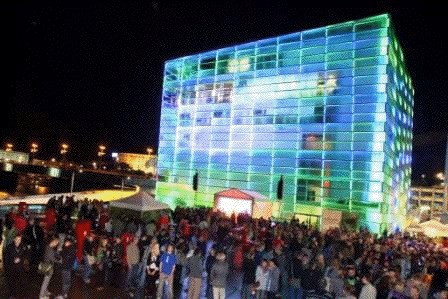 In 2009, the festival endeavored more than ever to appeal to the general public – mixing art, experiments in technology and electronic music performances – and could be considered more an entertainment event than a classic art exhibition. The ‘Device Art’ exhibition curated by Kusahara Machiko (Waseda University) and showing work by a lineup of artists including Maywa Denki, Kuwakubo Ryota, Hachiya Kazuhiko, and Iwata Hiroo was conceived in accordance with this spirit. The exhibition follows a five-year project started in 2004 and led by Iwata Hiroo (Tsukuba University) involving an interdisciplinary grouping of scientists and artists. Device art is considered by some to be mere technological gadgets as opposed to ‘high art’ but it is undoubtedly characteristic of Japanese media art: sometimes funny, sometimes poetic, sometimes too simple or not artistic enough…

Kuwakubo Ryota’s Nicodama, for instance, is minimalist but effective: a pair of eyeballs blinking synchronously that can be stuck on any surface, turning anything (including a dustbin…) into a face-like, ‘humanized’ object. 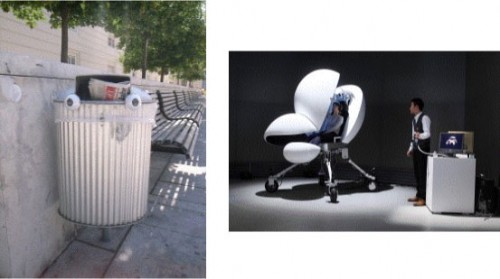 Iwata Hiroo, a pioneer in the field of Virtual Reality, presented his Media Vehicle, a strange device where the spectator is completely isolated from the real world but receives visual and audio information from the outside, amounting thus to a kind of ‘brain in the vat’ experience.

The Japan Media Art Festival – a yearly event run in Tokyo since 1997 by the Japanese Agency for Cultural Affairs and the CG-Arts Society – organized, in addition to a small booth at Ars Electronica, another exhibition in Vienna just a few days after the festival. With a theme of ‘OTO’ ( ‘sound’), it once again functioned as a showcase for Japanese popular culture and technological innovation. The exhibition was divided in three sections: ‘Make Sound’, ‘Read Sound’, and ‘Watch Sound’. 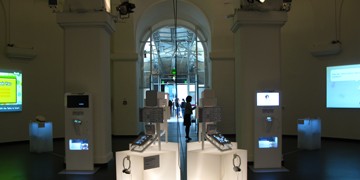 View of the ‘Make Sound’ section of the exhibition 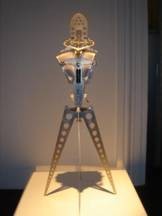 The ‘Watch Sound’ section, showing music videos with a close connection between images and sound, could be seen as a mainstream version of the modernist quest for ‘synesthesia’ present in art throughout the 20th century, cf. the exhibitions held in recent years in the US (MOCA, Los Angeles) and Europe (Centre Pompidou, Paris).