by Yamagishi Kaoru (ART iT) 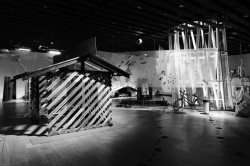 In a vast space pierced by massive tubular columns, an unfamiliar world titled Big Stop manifests itself. The only way visitors are permitted to view this installation is as part of a tour with a visually impaired volunteer as a guide. The monotonous tones of a recorder reverberate through the darkness, and emerging in the light that flashes on and off in time with the slow beat of a drum is an assemblage of items including a shed consisting of a roof and pillars only, a rusted bicycle, galvanized sheet iron, kimono, and old household possessions. We strain our eyes to try to identify each item, but they seem to have lost all meaning and memory and become simply indistinguishable objects. Prompted by our guide, we touch Plasticine, old blankets, and other surfaces, and purely pleasurable sensations we experienced when we were children come back. The moment we realize that for visually impaired people awareness of an object begins with ‘touching’, we stop seeking meaning and give ourselves up to the still unnamable world before us. As the tour comes to an end, our guide reads aloud a message in Braille inscribed on a length of plastic water pipe informing us of the history of a certain house, including its construction, extension, and the date of its demolition. It’s only then that we finally realize that the work is a collection of scrap wood, household possessions, and other items left over from the demolition of a private house. Finally, our guide leads us to a corner of the gallery where the house’s foundations are laid out and, as if performing some secret ritual, traces with their hand something etched in the surface of the concrete. Only this time we’re not told what’s written there, and at the end of the tour we’re left feeling powerless and frustrated.

The aim of the project is to direct people’s attention to the way art is integrated into the cycle of consumption in today’s systematized society and encourage them to question again at a basic level the role of art today. This approach of regarding art as something that’s not self-explanatory is also attributable to the nature of the venue, which doesn’t necessarily always deal with fine art. As seen in past works such as God Bless America and Baby Insa-dong that were displayed in other spaces, Takamine digests and transforms into artworks problems such as US despotism and our relationship with ethic Korean residents of Japan (in the latter case as an interested party) that are often painful to confront. In this work he seems to be questioning the basic meaning of the artist’s role of creating art in today’s world with its overabundance of material goods. The exhibition certainly served as an opportunity for this reviewer, who likes to think she affords as much importance to touch, hearing, and the other senses as she does to seeing, to reconsider her appreciation of our overemphasis on the sense of sight.