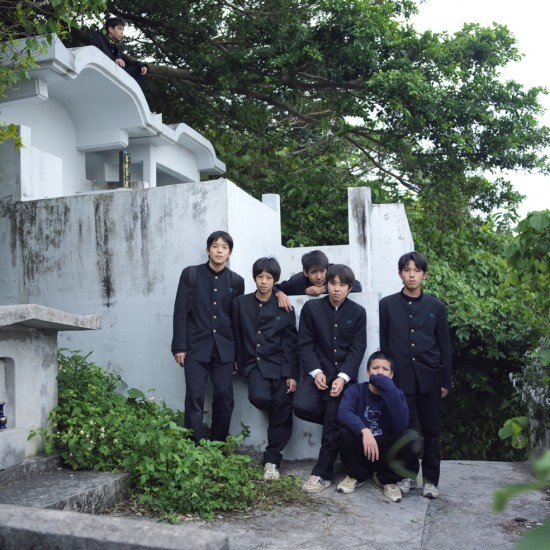 I have already touched on the portraits of Ryuichi Ishikawa (b. 1984) in a previous column (Critical Fieldwork 48: Japanese Portraits). I noted that the skill of the portrait artist lies in taking photographs based not on identity but on sameness. If the “one and the same” in identity concerns the subject (“I” am “me,” not “you”!) then the “one and the same” in sameness concerns the predicate. When we’re naked we’re the “same,” when we’re sick we’re the “same,” when we die we’re the “same,” you are the “same” as me. Photographs that establish individual identity are photographs of respectful friendship and honesty, photographs that preserve outlines, ie, personal unity. Sameness photographs view others as one’s equal by showing no consideration for the subject’s identity in so far as the predicates and verbs are “the same.” These are photographs of love and humor that respond not to the real thing under the surface but to the facade. Naturally, for people who are slaves to identity, such photographs can be uncomfortable or taboo-breaking, but this is where the appeal of “portraits” comes from.

In the history of post-war Japanese photography, and in particular from the late 1960s through the 1970s, “Okinawa” has been a privileged subject. (1) This is because famous photographers such as Shomei Tomatsu and Takuma Nakahira visited Okinawa again and again in search of (what they regarded as) the “reality” revealed in concentrated form there – pure nature, unspoiled traditions, or the reality of the scars of fierce warfare and US military bases. This period was also the period in which, along with the pervasion throughout society as a whole of information media, which is to say the emergence of a society in which “reality” itself was the best-selling product, photography, which had long sought to reveal “reality” and regarded this as its ethical identity, became increasingly ineffective. At this time, those photographers who could not discard entirely the notion of seeking photography’s identity in the revelation of “reality” began to search for it outside the information media society, which is to say outside urban areas. It is this that led to the boom in Okinawan photography. These photographers went to Okinawa in search of the inherent radiance of life, in search of places where the contradictions of Japanese society were laid bare; in short, they went there in search of a reality lost in the media society. Whether the individuals concerned were conscious of it or not, this was an aesthetic version of the colonialism imposed on Okinawa.

The Okinawan photographers who, for better or for worse, attracted attention as a result of this boom (2) have consistently resisted the tendency of photographers from the “mainland” to regard Okinawa as a privileged subject and to represent Okinawa unilaterally. This is both reasonable and to be expected. The mainland photographers were simply projecting onto the “outside world” of “Okinawa” their own dreams in the form of a “lost reality.” How dare they superimpose such selfish dreams on the reality of Okinawa?

At the same time, however, one could also say that during this period Okinawan photographers were also slaves to the “real Okinawa.” And just as the mainland photographers projected their longing for the “outside world” on Okinawa, perhaps the Okinawan photographers dreamed of a real Okinawa that only they could capture on film, of an essence – or identity – of Okinawa that only people who lived there could understand. And yet not only did the subject that bore their dreams have to correspond to the subject onto which the “outside world” as viewed from the mainland was superimposed, but even if they searched for an essentialist identity in present-day Okinawa, which is neither the Ryukyu Islands nor the US nor Japan, the result would be nothing but sophistry. Perhaps their irritation originates in this.

“Okinawa,” burdened with the karma of identity politics; and “portraits,” shot in the pursuit of sameness. In a sense, Okinawan Portraits 2010-2012 by Ryuichi Ishikawa reconciles these two mutually incompatible things. Probably this is an attempt by someone of Ishikawa’s generation to finally free a realistic, that is to say, identity-free, Okinawa from the magnetic field of identity politics through the power of the sameness of portraits. The various characteristics of Okinawa, which is burdened by so many layers of history as the “Land of the Sea,” overlap within each of these portraits, and every subject sparkles like a jewel in the peculiar light and atmosphere of Okinawa. The first thing that probably attracts the reader’s eye is Ishikawa’s ability as a “portrait” photographer to respond to sameness. Responding “not to the real thing under the surface but to the facade” means rather than dealing with (ie, identifying) the subject as part of some kind of essence (Okinawan, Southern Islands, primitive Asian, etc), confronting the subject head on and exposing oneself fully to the intense brightness of the truth that the person exists and lives there in exactly the same way as oneself. Identity demarcates, separates and shuts in people. Sameness mixes, makes continuous and opens up people. This is not a photobook that depicts the “identity” of the Okinawan people. Rather, one could say its theme is Okinawa’s very identity-free status as a place, a status so surprising even the word “hybrid” sounds hypocritical. It is a photobook consisting of photos of people who live and breathe this freedom that have been gathered together and selected as living examples of it.

In fact, neither the subjects nor the style of this book hint at any kind of unique “identity.” Juvenile delinquents and yakuza can be found all over the country, and juvenile delinquents and yakuza everywhere are ridiculously similar. Likewise, the freakish characteristics of the freaks that hang around the bases and red-light districts probably belong to a definite form in the history of Japanese photography. Come to think of it, isn’t the combination of freakish subjects, square composition and the use of flash a style that has been repeated by countless photographers since the time of Diane Arbus? As for Ishikawa, in addition to fitting frames to his subjects in the form of squares (collection boxes!), he puts them in boxes, draws additional lines and dividing lines, balances them by putting them with pairs, and places them at cross-purposes to the horizon (reverse tilt). In other words, in terms of its construction, this photobook is openly formal.

Reverse tilt (the subject, not the camera, on an angle)

Sameness breaks down the contours of the identities of A and B and places both in a state of continuity or multiplicity. This is a state in which subject and viewer intermingle, like fellow sufferers of the same sickness, for example, or lovers during a one-night stand. In comparison, formality has the effect of placing the subject within a particular format, or, in other words, of separating the subject from the viewer by inserting the artist’s own formal intentions. In Okinawan Portraits 2010-2012, sameness and formality are in competition. This contradiction originates in the historical incompatibility between “portraits” and “Okinawa.”

Sameness is a fragile quality that comes into existence like a momentary happening and that cannot depend on any kind of essential quality. It is easily assimilated into the kind of humanism that makes us think, We’re all human, or, Okinawans and mainlanders are the same in that they’re failures who deserve to be loved. At the same time, because Okinawan photographs have always been placed within a strong magnetic field of identity politics, there is an almost automatic inclination to try to educe from these portraits an Okinawan identity. It is for this reason that Ishikawa deliberately and studiedly creates collection boxes. In order to separate sameness from human empathy and affection and to protect his subjects from Okinawan essentialism, it was necessary to adopt a clear formalism. An identity-free Okinawa is depicted with its fragile sameness intact.

Ryuichi Ishikawa Okinawan Portraits 2010-2012 and A Grand Polyphony were published by AKAAKA in November 2014.

In March 2015, Ryuichi Ishikawa was awarded the Kimura Ihei Prize, one of Japan’s most prestigious photography awards.

In addition to this southward orientation there was also a northward orientation as a result of which “Hokkaido” and “Tohoku” arose as privileged subjects (Takuma Nakahira, Daido Moriyama). Going back even further, one could also add “India,” although at that time the search for “another world” was completely subsumed either by anachronism or the advertising industry.