Taiji Matsue’s new photobook, JP-01 SPK (AKAAKA, 2014) is, as the city code of the title suggests, a book dedicated to one city: Sapporo. However, perhaps because the subject has been narrowed down to one city, within its pages there is noticeably an intriguing departure from Matsue’s usual style.

Before we go any further, let us remind ourselves just what “Matsue’s usual style” is. (1) Taiji Matsue’s photographs have a strict format. As a rule, they are shot in clear skies and direct, natural light. Matsue eschews portrait format, using only landscape format without including the horizon so that the subjects fill the entire frame. His aerial photographs in which the shooting locations are chosen freely follow an even stricter format, with the inclusion of the condition that they are shot at an angle directly facing the subject. The point is to push the entire image to the front as a flat plane and shut out the effect of leading the eye into space within the picture plane, whether it be “down there” or “over there,” directing the viewer’s attention to the dense concentration of information that is crammed into the image in place of spatial depth. Accordingly, the oblique composition that is normally used in aerial photographs to emphasize the spatial expanse cannot be employed. (2) As for perpendicular composition, shooting from directly above the subject flattens its height and constricts the image to a painterly pattern, and because this results in the loss of the topographical information that is essential to Matsue’s photographs, this composition, too, is not employed. 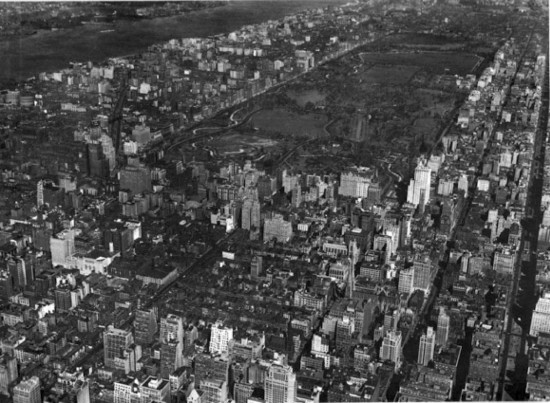 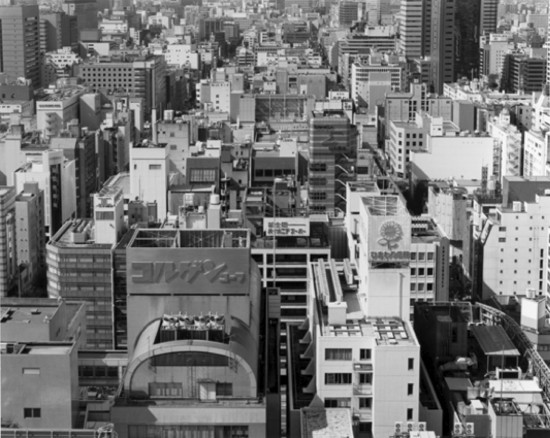 Next is “absolute focus.” This is not the same as pan-focus. Pan-focus refers to the range over which the focus appears correct in order for the human eye not to be able to distinguish blurring within the permissible circle of confusion, or in other words to a pseudo-focus reliant on the naked eye. In contrast to this, the focus position that is absolute in terms of the lens (ie, not reliant on the naked eye) is, of course, the focal point, and the moment when all the light focuses into an image at the focal point is the moment when that light comes from an infinite distance. In other words, “absolute focus” is the focus that is achieved automatically based on the principles of the lens when a scene is shot with the focus adjusted to infinity, with the word “absolute” referring to the fact that it is not premised on humans looking at it.

Last is helicopter altitude. Matsue’s “usual style” demands the peculiar “low altitude” of a helicopter, which is neither high enough for the subjects to appear as geometrical patterns (satellite photos, aerial photos) nor low enough for the subjects to be identifiable (snap shots). To put it another way, the photographer records Japan in the 21st century while flying at low altitude between the eternity of physical/geographical nature and the art (snapshots) of humans living for a limited time.

Let us recap. Taiji Matsue’s standard style involves the conditions of clear skies, direct and natural light, landscape format without a horizon, low altitude, shot front on and absolute focus all being met. Based on this, people looking at this latest photobook will no doubt notice that the artist is breaching these conditions at almost every turn. Not clear skies but cloud (JP01-25), not direct, natural light but low light from the front left creating shadows (JP01-71 and JP01-77, etc), shot not from front on but from an angle (JP01-73), beginning at low altitude but gradually ascending (the page sequence from JP01-29 to JP01-43), and the coup de grace, the insertion of cuts shot from the ground after the helicopter has descended (the series of photos with the prefix SPK). Unusually for Matsue’s work, the final ten or so represent a kind of upsurge, with the last two (SPK35243, SPK 44134), which show Sapporo on a normal day and Sapporo in the snow shot from the exact same location and angle, constituting a masterful climax. So just what kind of significance is there to these departures from Matsue’s usual style? 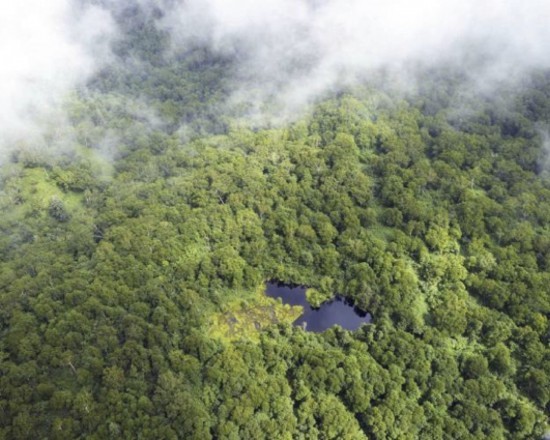 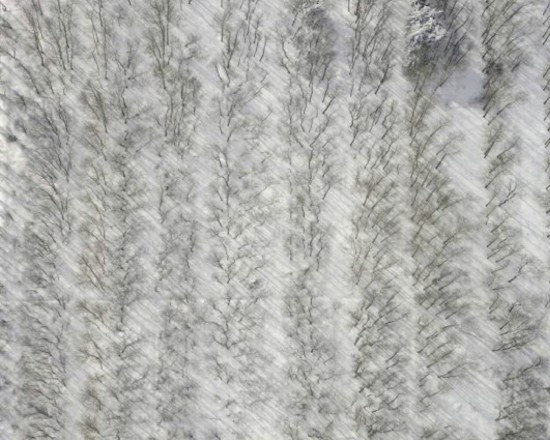 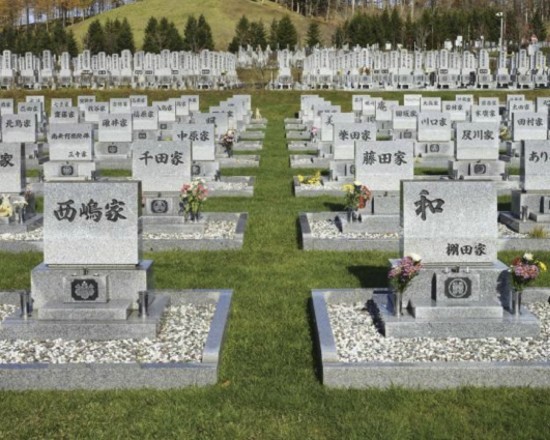 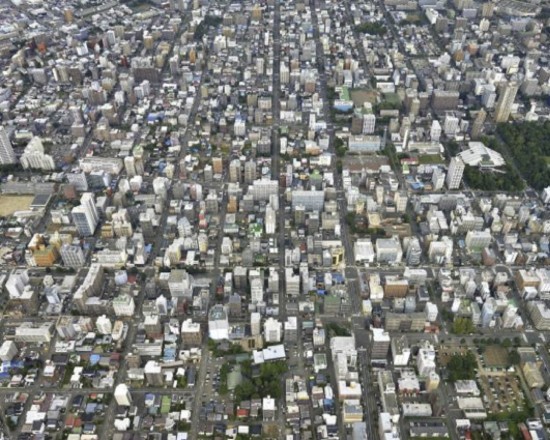 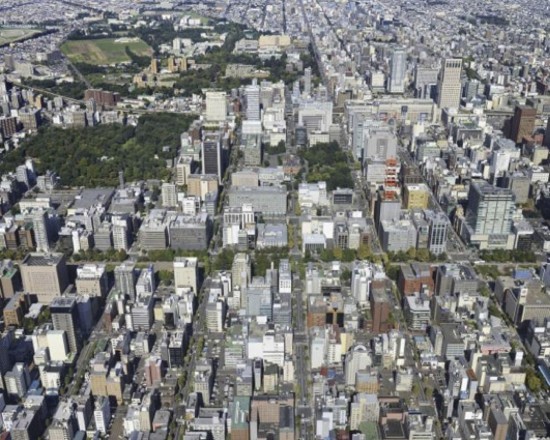 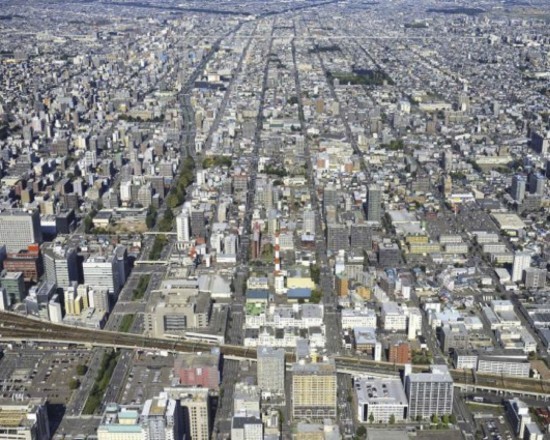 The photographer has established with regard to the subject of Sapporo an axis line from “forest” to “city.” (3) The 64 photos in the book go from photos of forests (1-22) through photos of areas adjacent to forests (quarries, golf courses, ski resorts; 23-27) and areas adjacent to cities (graveyards; 28-33, suburbs, parks, housing; 34-50) before arriving at photos of urban areas (51-64). “Forests” represent the “nature” of Hokkaido, while “cities” represent “art” and “culture” from settlement through to the present. That is to say, it is clear that this axis line corresponds to Sapporo’s pioneer history, and furthermore that “forests” represent (a) space not subject to logic (grid patterns) and (b) space in which the linear sense of direction wavers, while “cities” represent (A) space subject to logic and (B) space in which the sense of direction is clear. In other words, while the photobook as a whole unfolds along the axis line forest ab to city AB, the groups of photos of areas adjacent to forests and areas adjacent to cities form various intermediary stages along the way, enriching the publication. (To be continued)