Clay and Form: A review of the Ryuichi Kakurezaki exhibition ‘Serving for Integrity’

Opened in April 2003, the Kikuchi Kanjitsu Memorial Musée Tomo, situated next to the Okura Hotel in Tokyo, is a relatively new art museum, but having hosted a succession of thought-provoking exhibitions, it has already secured a position for itself among lovers of ceramics. Currently underway at the museum is an exhibition titled “Serving for Integrity,” which looks back on 30 years of the work of a renowned artist who represents contemporary Bizen-ware ceramics, Ryuichi Kakurezaki (b. 1950). The 55 works, carefully chosen by the artist himself, whether they be receptacles or objects, display a robust form throughout which the aesthetic of the artist is concentrated, like the posture of a ballet dancer whose nerves are taut to the very tips of his fingers. Not only are they highly impressive; they also clearly reveal the fundamental nature of the ceramicist Ryuichi Kakurezaki, that is, reveal what the “integrity” in “serving for integrity” is about.

The forms developed by Kakurezaki are not large in number. Many hours were spent on honing them, eventually culminating in pure forms to which he gave the names “Phalanx,” “Hokuso,” “Hiruko,” “Shinin,” “Sou,” and “Zoi.” (1) The objects created in these pure forms and their derivatives (receptacles such as vases, incense containers and flower bowls) is what constitutes Kakurezaki’s ceramic art. The pure forms have a modern orthodox design (2) made up of a combination of basic elements. In Kakurezaki’s case, the basic elements are “surfaces” (flat surface, curved surface, cross-section). 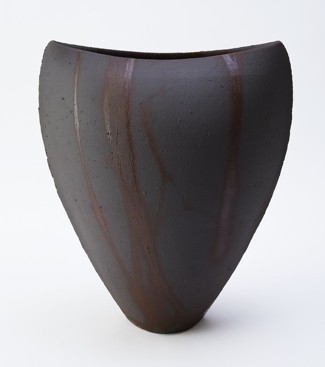 His early-period wide-mouthed vase (1983) already had a structure created from two slim standing curved surfaces. The structure was purified and from it emerged the first “Phalanx.” When the two curved surfaces are extended cylindrically to form an opening, it becomes “Hokuso,” and when at a lower in height, the surfaces are brought together like the palms of the hands, it becomes “Sou.” The “Phalanx” of 1992 was a variation in which a flat surface was sandwiched between two curved surfaces, but this pattern was purified and from it “Hiruko” emerged. (3) 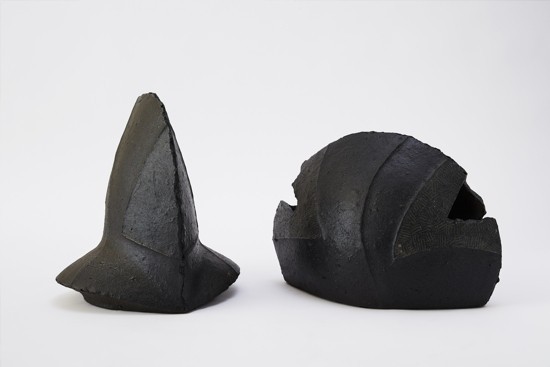 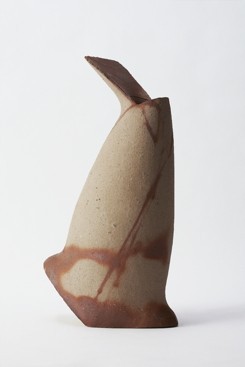 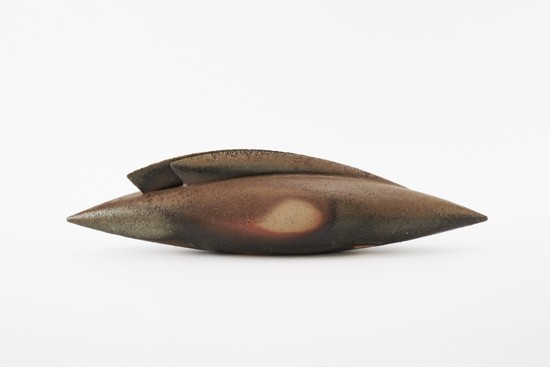 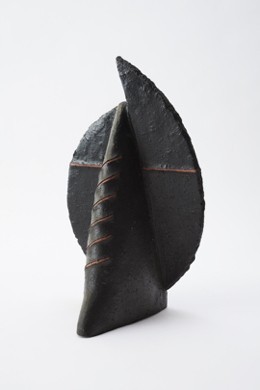 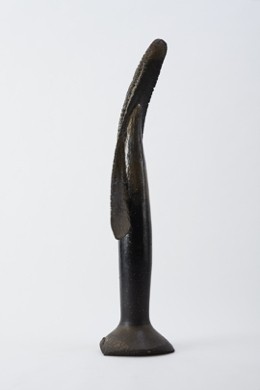 He has also developed “Shinin,” a form in which two objects of the same type created from a combination of curved and flat surfaces are joined in a vertically symmetrical way, like a scene in which they are reflected on the surface of the water, and the “Zoi” series, pure forms in which he increased the number of curved surfaces. He has, in addition, diversified the individuality of the objects and receptacles by expressing the curves as beveled surfaces, glazed surfaces or receptacle surfaces (in effect). 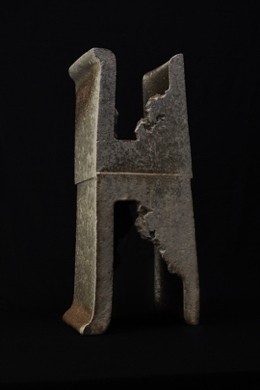 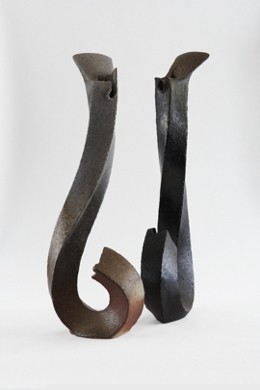 The pure forms created using variations of the basic forms are autonomous and highly independent. Therefore, for example, the modernist sculptor Brancusi was able to produce the pure forms of an “egg” or “bird,” either in marble, brass or bronze – in principle, using any kind of material. 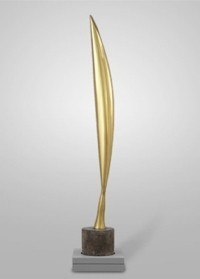 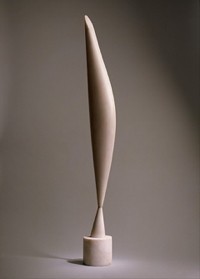 Kakurezaki’s thoroughly pure forms are of course also autonomous and highly independent. So, this being the case, why is there no “Phalanx” made from iron, “Hokuso” made from glass, “Hiruko” made from wood, “Shinin” made from stone … and so on?

This question also provides its own answer: Kakurezaki does not want to make the autonomous forms independent. He wants to keep them tethered to their material. The forms are pure and the more powerful they are, the more pure and powerful materials and sense of texture and presence is required in order to keep them tethered. That is the reason for his choice of ceramics and of Bizen ware, which exudes, among the different types of ceramics, a strong sense of the soil.

In general, firing ceramics until they become hard yet are still light is considered best. The creation of ceramics is a skill involving the firing (ie, fire) of heavily damp (ie, water) clay (ie, earth) at a high temperature until it turns into a hard yet light object (ie, wind). Because in this case, the fundamental nature of the ceramic traces from bottom to top the four classical elements arranged along the axis of gravity, the issue of form is secondary. No intrinsic relationship exists between the material and the form. The reason that Bizen ware was able to remain a variation of traditional forms of receptacle was because it is a type of ceramic that is completed by the firing of the pure clay at a high temperature in a pure manner.

The first issue for Kakurezaki, who selected Bizen ware in order to tether the autonomous pure forms to the materials, is likely to be the fact that in Bizen ware, an issue with form does not exist. Thus, in the beginning, discovering some essential relationship between the material and the form was the task at hand, and if that relationship involves the highly plastic Bizen clay (tatsuchi), it is a more than adequate material, required as it is to form the smooth curved surfaces which are Kakurezaki’s basic forms. From this point, capitalizing on the capability of the Bizen clay to the fullest degree, the Kakurezaki-style Bizen ware constructed from graceful curved surfaces were created. This relationship, however, is also an easy one. If the material has a high level of plasticity (bamboo, wood, metal, plastic …), it is possible to create any number of configurations of graceful curved surfaces. There is no necessity for clay to be the material.

It was at this time that he commenced work on the “Una Mistura” series. Mistura (“mixture” in Portuguese) refers to the upper layer of soil from the rice field, which is usually discarded when the tatsuchi (the bottom layer of soil), the soil used for Bizen ware, is collected. The upper layer of soil is combined with other soil to make a mixture containing approximately 30 different types of soil. Because this is what is known as a natural kneading soil, it is not smooth and has virtually no plasticity, and is a difficult material to shape and susceptible to leakage of water. In other words, “Una Mistura” definitely discarded the idea that high-quality clay equals the relationship between material and form that is the construction of smooth curved surfaces. As a result, the mix of waste soils that cannot be relied on for plasticity and suchlike, and the autonomous forms constructed from basic surfaces, are sharply opposed, and what appears there is the essence of the Kakurezaki ceramic in a pure form. It is filled with a sense of tension in which crude lumps of dull earth and the pure forms that he attempts to make independent from them are in an intense tug-of-war. A ceramic that comes into existence not by gravity but by tension. “Integrity” is none other than the tension between the clay and the form. Kakurezaki is undoubtedly serving “integrity.” 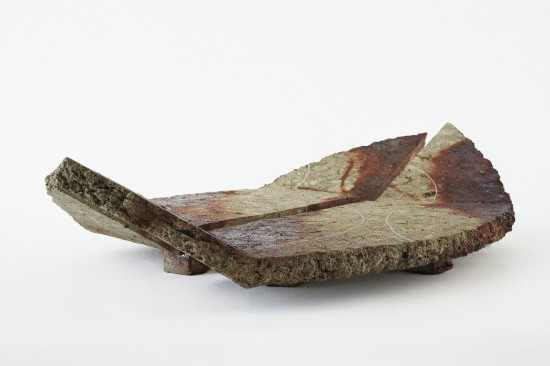 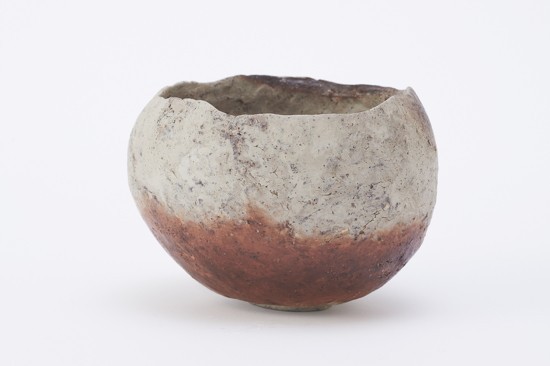 “Una Mistura” also includes a series of “wan” (bowls). One might say that it is this series that marks the pinnacle of “Una Mistura.” This is not because the “wan” are in the shape of a tea bowl and are vaguely reminiscent of Koetsu tea bowls (such as otogoze). A bowl shape is made in which one surface is bent and wrapped itself and a glazed surface added to the inside. That is, the fact that it is constructed from two surfaces means that Kakurezaki’s bowl is not in any way different from his pure forms up to this point. The fact that in “Una Mistura,” which is a pure realization of his own principles relating to ceramics, he was able to derive as an extension of his own pure forms one of the most essential forms of traditional Japanese ceramics – the tea bowl – is conspicuously apparent in this series called “wan.”

“Ryuichi Kakurezaki: Serving for Integrity” was held at Musée Tomo from January 18 through March 30. The catalogue, which the artist had a close hand in editing and designing, is also superb.

If this title were rendered in the Greek language, it would be “ζωή” (life).
For example, Kakurezaki’s three-footed vase is reminiscent of the stage costumes of Oskar Schlemmer, the balloon dress of the 1950s and the bubble dress of Pierre Cardin.