The meaning of photography, or, B(latent)-horror effects (2)

One can detect in Lieko Shiga’s photographs any number of effects familiar to us from “creepy photography.” 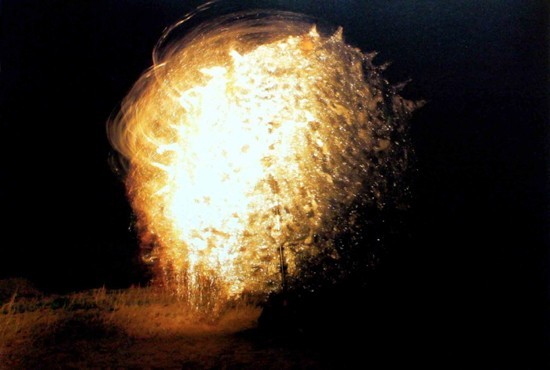 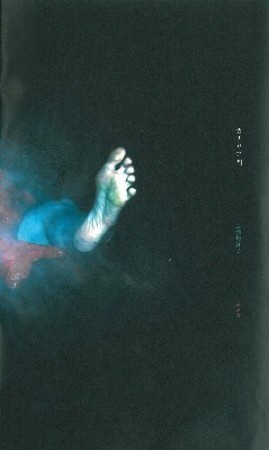 Emerging from darkness (the effect of obscuring the totality)
From the series “Canary-Mon.” 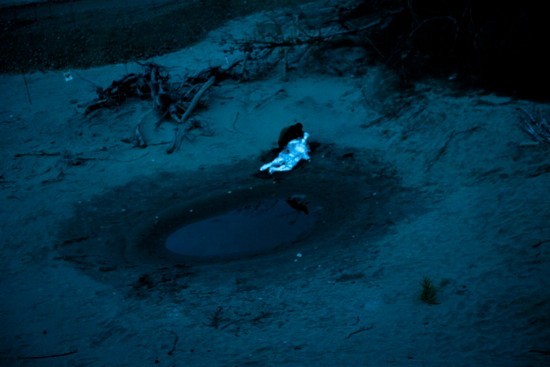 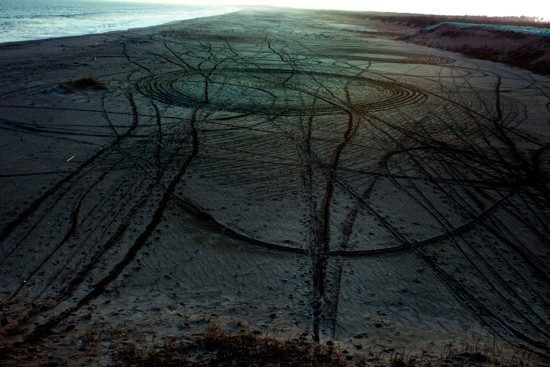 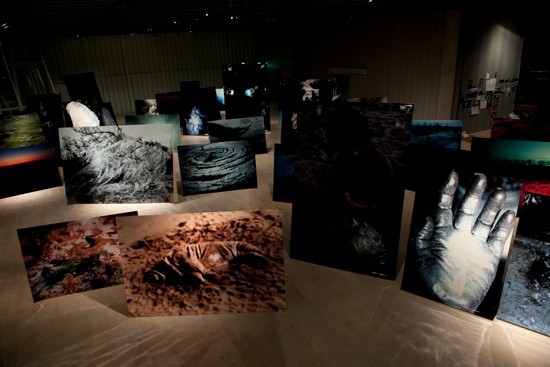 Crop circles (geometric patterns in natural settings)
Above: From the series “Rasen Kaigan.” Below: Installation view of “Lieko Shiga: Rasen Kaigan.” (Photo Lieko Shiga) In the foreground “the carcass (?) of an unidentified creature” and behind that “circles.” 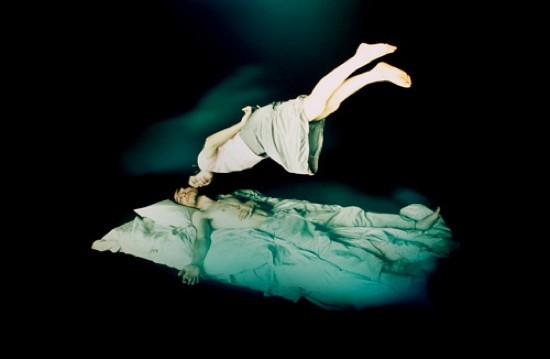 Levitation
From the series “Canary.”

Lieko Shiga’s photographs are B-grade horror. Moreover, motifs and effects that are even more “as is” than actual horror movies have been repeated like a trademark in her work consistently from the beginning to the present. What is wrong with that? you may say. People are entitled to enjoy laughing at horror movies. However, regardless of the kind of onsite activity or fieldwork she does, of the harm she suffers from the tsunami, of the poignant discoveries she makes, of the extent to which she is inspired by cultural anthropology, of XX, of OO, because the photographs that have passed through the filter of Lieko Shiga are all B-grade horror, is there really any meaning in these acts other than that she “created something to the best of her ability”? Whenever I read the lavish references to philosophy or ideology or ethics that accompany Shiga’s photographs, what I sense is the absurdity of people with no appreciation of photography responding to surreal horror effects by desperately administering a blood transfusion to an empty body. (1)

Of course, blood is precious. Reading the fifth lecture, “Shashin wa aragau” (Photographs challenge), in the catalog (Lieko Shiga, Rasen Kaigannotebook, AkaAka Art Publishing), for example, the feelings of the artist who touches on the essence of photography are communicated directly, with results that are even touching. However, this and the photographs that Shiga actually takes and exhibits are different things, and just because touching words are displayed next to photographs that are popular in style does not mean that the two become one.

In fact, as should be quite obvious to anyone, Shiga’s photographs are quite blatantly manipulated in order to produce the above effects. Lieko Shiga’s talents as a photographer lie not in the photographs themselves, but in her ability to use photographs and to produce certain effects with them. For Shiga, photographs are none other than actors. And just as one might apply make up to actors and dress them up before sending them onto the stage, she collages on her photographs, alters the light and uses filters before installing them in exhibition venues. In isolation from the episode in which she herself apparently fell victim to the Tohoku earthquake while undertaking fieldwork in Kitakama, it is in this sense the “Rasen Kaigan” exhibition at Sendai Mediatheque has been a success.

As many readers will know, the structure of the Toyo Ito-designed Sendai Mediatheque, which features transparent exterior walls and spiraled steel cables that entwine thickly and appear to pierce the floors like trees (2), is designed in such a way that there are no pillars as such on any of the bright, spacious floors. If Shiga had installed composite panel dividing walls for the purposes of displaying her photographs, this would have amounted to ignoring the characteristics of the space, or in other words the stage. It is for this reason that she avoided this, instead affixing her photographs to individual panels roughly the size of a person and arranging these in a spiral pattern so that the surfaces bearing the photographs faced the center of the floor. As a result, light entering from the four sides of the building serves as backlighting from the perspective of those viewing the photographs, who see all of the images lit from behind as they are gradually guided to the center of the spiral. (3) Because all four corners of most of the photographs are black, the panels themselves take on the appearance of black holes against the backlighting, with the images standing out dramatically inside these black squares. 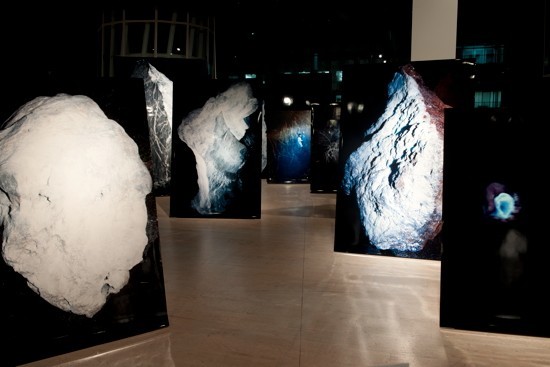 But what exactly is the theme of this “stage production”? In the case of this latest show, despite the repeated suggestions that “Rasen Kaigan” is “not a documentary” based on the facts that Shiga’s photographs are so-called “staged photography,” that the exhibited works include photographs taken before the disaster, and that there is no noticeable difference in Shiga’s style before and after the disaster, a curious situation has arisen in which any number of statements have been idly introduced in an effort to somehow link the work with the disaster zone, all of which are unnecessary excuses. If one concentrates not on the photographs but on Shiga’s production, one notices that the artist makes full use of the photographs to express frankly the “mourning” of those who died in the disaster. The exhibited photographs are at once her own work and works playing the role of photographs left after the tsunami. For this reason, it is as if the existence of the photographs themselves and the existence of the dead in the photographs are superimposed over each other and erected as panels roughly the size of people. In particular, the countless randomly repeated photographs of rocks call to mind various folkloric contexts such as the piling up of stones by children in Sai-no-Kawara (Children’s Limbo), the stones arranged in front of Jizo statues, and the gravestones of those who died leaving no one to attend to their graves, both producing a memorial tower-like effect and suggesting strongly that the meaning of the entire installation lies in “mourning.” As light from outside, the natural light that turns into backlight is probably a metaphor for the temporal present. The photographs (ie, the dead) have their backs to the light from outside (ie, the present) and face the center of the spiral. Needless to say, this no doubt represents the point in time on the day these “deaths” occurred. Accordingly, the act of walking among these photographs (ie, the dead) at this venue is automatically to confront “that time on that day,” to recall “that time on that day,” but at the same time, in order to view these photographs, we must turn around and confront (ie, mourn) the squares of darkness that stand out against the backlight (ie, the present). “Rasen Kaigan” is actually incredibly cleverly constructed as a stage device in which the acts of recalling and mourning alternate.

Just as a stage director does not create actors, Lieko Shiga is not – whether straight or pictorial – a photographer, but a director of images. And just as there are no directors who can produce only B-grade horror, there is no reason why Shiga should remain a slave to these monotonous effects. Perhaps it’s time she made a conscious decision to move on.

Yoshiaki Kai. “… Despite the various elements that inject meaning into her photographs, I sense a certain emptiness in Shiga’s work. By empty I mean that they raise questions as to whether ultimately these photographs are not saying anything. For example, to be honest, I don’t get the sense at this stage, at least, that these works communicate anything in particular about Kitakama.” (Lieko Shiga, Rasen Kaigannotebook, AkaAka Art Publishing, 2012, p.184). Of the lecture records in this publication, Kai’s is the only one piece of “criticism” based on the photographs themselves. Although unfortunately this “honesty” is weakened by the diplomatic turn of phrase.