From Karatsu, to Karatsu – The Adventures of Yasumoto Kajiwara (Part 1)

Japanese contemporary ceramics originate from two movements that developed in the 1920s and ’30s; namely, the mingei (folk craft) movement founded by Soetsu Yanagi (1), and the Momoyama revival movement led by Toyozo Arakawa and Tokuro Kato. (2) The former promoted an aesthetic appreciative of Korean (Joseon dynasty) ceramics, while the latter regarded Momoyama period wares as the ideal in Japanese ceramics. It would be fair to say that both movements have influenced the values of a great many ceramicists and ceramics enthusiasts to this day.

As is commonly known, Old Karatsu is the style of ceramics initiated by the Joseon dynasty potters who were “invited” (some say “abducted”) to Japan during Toyotomi Hideyoshi’s military campaign in Korea (3), and the introduction of this style’s climbing kiln technology led to major advances in Momoyama ceramics. In other words, Old Karatsu exists at the point where Joseon-dynasty and Momoyama ceramics intersect.

Momoyama ceramics, which existed for just forty years or so from the end of the 16th century to the 17th century, came to be forgotten in the following eras. In other words, Arakawa and Kato rejected the long-established Japanese-style ceramics of the Edo period and boldly turned to the Momoyama ceramics for their tradition. According to Tokuro’s Kiseto, the earliest examples of Ki-Seto ware were Japanese celadon ware that began to be produced in the 12th century after the model of the Yuezhou kiln ware, which over a period of hundreds of years took on yellow tones due to the adoption of oxidization firing techniques. The thin, light, hard firing; the true, vigorous, symmetrical shaping that calls to mind metallic vessels; the simple engraving; the exquisitely sensitive throwing with margins of millimeters and less; and the meticulousness of placing each piece in a sag gar before firing are none other than hallmarks of the Chinese aesthetic epitomized by Song dynasty porcelain, which is to say the dominant aesthetic of what was then the most advanced nation in the field of ceramics. Ki-Seto ware’s sophistication derives from the attainment in Japan, a backward nation where porcelain-making techniques were still unknown, of a beauty equivalent to this. In other words, using original, local materials and original techniques, Japanese craftsmen achieved a global standard.

However, the second half of the 16th century was a time in which the aesthetics of tea ceremony masters shifted from karamono (lit. Chinese things) to wamono (lit. Japanese things). Against the Chinese aesthetic that was then the global standard, this was a visual revolution that involved detecting “beauty” above all in imperfect and distorted things. One could probably say that the Setoguro, Shino and Oribe wares that came to replace Ki-Seto ware were made not in accordance with international standards of beauty, but with an eye to achieving a “distinctly Japanese” beauty in opposition to it. Momoyama Japan was a newly reborn Japan that considered itself the equal of other countries. Though they were all fired at the same kilns, the transition from Ki-Seto to Setoguro, Shino and Oribe represents an aesthetic turning point. This “peculiarly Japanese” beauty was an alternative beauty, a product of the open Warring States period. Even ignoring the imposition of a taboo on Furuta Oribe, it was perhaps only natural that it went out of fashion in Japan after the closing of the country to outsiders.

However, “distinctly Japanese” Momoyama ceramics, which emerged in opposition to what was occurring overseas (in this case Chinese porcelain), rely heavily by way of Karatsu ware on Joseon-dynasty techniques and designs, whether it be climbing kilns or an unrestrained painting style. But because what was “distinctly Japanese” could not possibly have been borrowed from the Joseon dynasty, an apt way of looking at it would be that history was deliberately distorted so that while the roots of Japanese contemporary ceramics were deemed to lie in the idealization of Momoyama ware in opposition to Chinese aesthetics, at the same time, the aesthetics of Joseon-dynasty porcelain that were the essential driving force behind it were deemed to have been “discovered” by Japanese eyes. It goes without saying that this is a kind of colonialism, but as the point of intersection between the Momoyama period and the Joseon dynasty, Old Karatsu has such a political background.

Moreover, going back even further, the legendary discovery by Yi Sam-pyeong of kaolin at Mount Izumi in Arita sparked the transition from Old Karatsu to the first ever production of true porcelain in Japan in the form of early Imari ware. Old Karatsu can also be regarded as the origins of porcelain in Japan. As well, people who question Old Karatsu also question the Joseon-dynasty white porcelain (Ido, Gyeryongsan, Hakeme, Kohiki) that directly followed it, and going back even further, they also question Goryeo ware, Ru-yao ware and Ding ware, and going back even further still, with respect to the transmission of techniques from the Korean peninsula, they also think it natural to reconsider Sue ware and Old Bizen ware (the Sabukaze old kiln sites). This is because in history, inquiry is not about leading to a single origin, but about discovering multiple sources. And this interest in the history of East Asian ceramics is in parallel with the emergence of new information arising from the excavation surveys being carried out in recent years in Japan, Korea and China. As an actual entry point into the history of ceramics, a history that is in the process of being rewritten as a result of new information concerning the Kishidake old kiln site and the Ru-yao and Ding kiln sites that looks set to dramatically alter the traditional image formed by documentary records and art objects handed down over the generations, and as a point of intersection between the two aesthetics that continue to dominate Japanese ceramics, contemporary Karatsu ware presents a lively epicenter and is producing a new generation of up-and-coming artists. 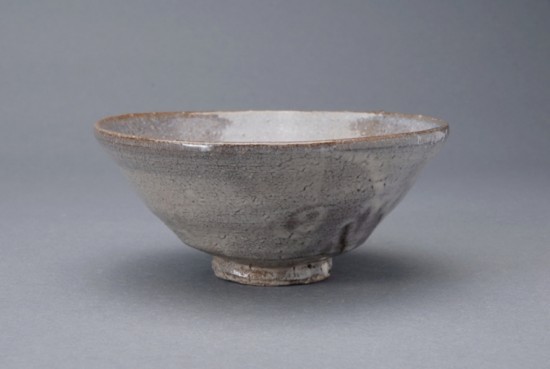 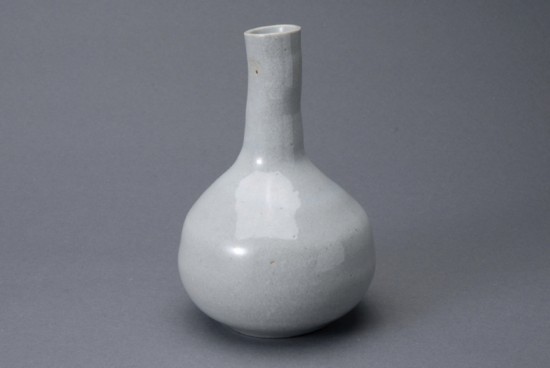 Yasumoto Kajiwara – Qingliangsi vase (a glaze named after Qingliangsi, the site of the Ru-yao kiln) 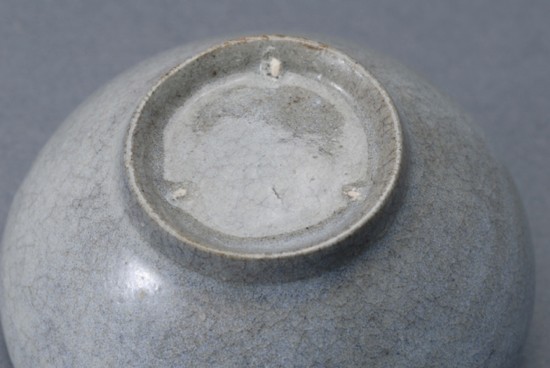 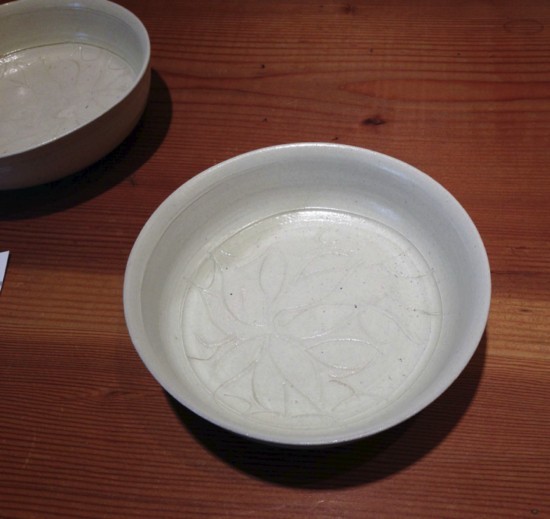 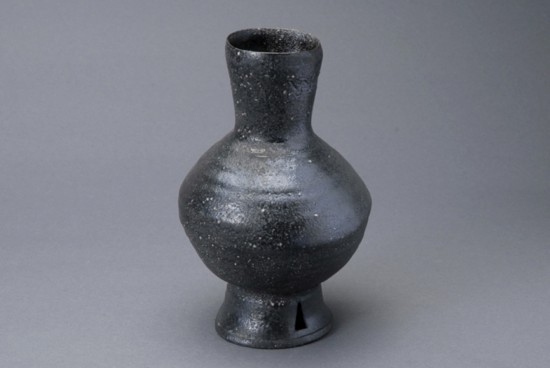 As well as being one of a number of artists setting new trends in contemporary Karatsu ware, Yasumoto Kajiwara (b. 1962) has also brought about a scission within Karatsu ware itself. In other words, Karatsu ware was viewed differently before and after Kajiwara. There are any number of artists more famous than Kajiwara, but few who are followed with as much interest among the next generation of young artists.

It goes without saying that it is the countless examples of Old Karatsu ware handed down to us that constitute the beauty of Karatsu ware. Accordingly, one cannot consider the question “What is Old Karatsu?” separately from this aesthetic. And yet artists before Kajiwara first rephrased this question as “What kinds of characteristics constitute the beauty of Old Karatsu?” and then proceeded to skillfully copy the various characteristics (form, color, sheen, pattern, antique appearance) they educed from the handed down pieces. In contrast, Kajiwara lacks this kind of “skillfulness,” or rather he doesn’t require it. This is because he is interested in the question “What is Old Karatsu?” which is to say he is interested in pursuing “the kinds of ceramicists that existed at the time, where they came from, what kind of clay they used, how they molded it, what kind of glaze they used, how they fired it and in what kinds of kilns” and recreating these in detail, or in other words in creating anew Old (?) Karatsu. Instead of copying the characteristics of Old Karatsu (contemporary materials + contemporary firing methods) he recreates the basic conditions under which it was produced (materials and firing methods of the time). Because Kajiwara is – due to the fact that there is no difference in geological soil distribution and the physiochemical process inside the kiln between now and then – in a sense a 16th century ceramicist who has journeyed to the present in a time machine and makes works using the same materials and in the same kilns, there is no need to “copy” anything. Essentially his works are made using clay (unmixed) produced by crushing and refining rock (sandstone/shale) collected around Karatsu and covered in various wood-ash glazes before being fired in an anagama kiln made from the same kind of clay as the works themselves. It was Yasumoto Kajiwara who proved the theory that the “sheen” of Old Karatsu ware was derived from rock. It is one of the trademarks of his work that the area around the foot is cleanly and crisply biscuit fired and beautiful. (To be continued) 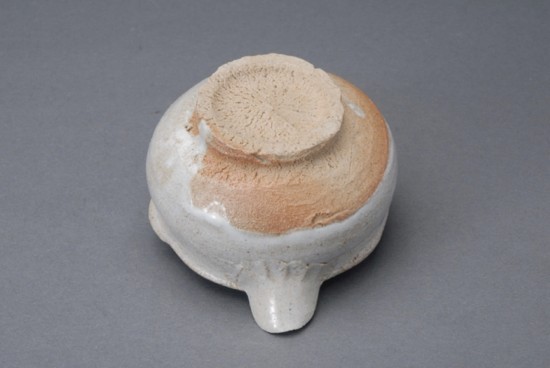 All photos courtesy Gallery Utsuwa-kan and the writer.