An artist whose delicate style enables her to transform often subtle feelings and even drops of water into artworks, has caused a stir on the international stage with her “one at a time” viewing method. We asked her about the secret of her creativity and her feelings towards her works.

– une place sur la Terre , which was first shown in 1991 at Tokyo’s Sagacho Exhibit Space, consisted of assorted objects including leaves, seeds, and other plant material, thread, and needles hung inside a tent set up inside the gallery. Visitors were only permitted to view the work one at a time, producing something quite different from the experience gained through normal viewing methods. Is it true that the prototype for this approach was a work you made when you were still a student?

Yes. The first thing I ever made that could be called an artwork was my graduation piece at art school, where I majored in design. I created a small scene resembling an altar by turning out the lights in the classroom, making a stage in an area surrounded by panels by pushing two desks together, covering it with a white cloth, shining lights on it from a low angle from left and right, and arranging symmetrically bamboo sticks, pieces of paper and plastic, beads, ribbons, and other objects that had been painted white. I didn’t think of it as art. I just wanted to create a spiritual place, or in other words the kind of place where my own presence was permitted, and for some reason it ended up like a sand play scene. The sequence of events was a bit odd, in that I only realized what I’d done when someone commented, “Actually, this is art.”

– There’s something in psychotherapy called sand play therapy, isn’t there?

I don’t think I was aware of it at the time, but perhaps “viewing” and “being on the inside” were naturally tied together. A top down perspective in which people or the collective lives of people look down from a position in the sky high above the earth can still be detected in my work, not just in a physical sense but also in terms of temporal distance. In retrospect, I suppose nothing has changed: I guess you could say I’ve been making one continuous work. For une place sur la Terre , which was the first work I showed to people one at a time, I created a kind of non-everyday space where the viewer could totally forgot the outside world. The inspiration for this was something that happened when a friend visited me while I was working on my own. I realized that my work became something completely different in the presence of even a single other person. You can actually see their expressions and body language, and they sometimes say silly things. As a result, I felt that all the things that dwell in the purest, deepest levels of art that were present when I was making the work alone completely disappeared. So I decided whoever was there should be there one at a time, and while the things that separate the inside from the outside have changed slightly over time, these kinds of works have continued for a while. 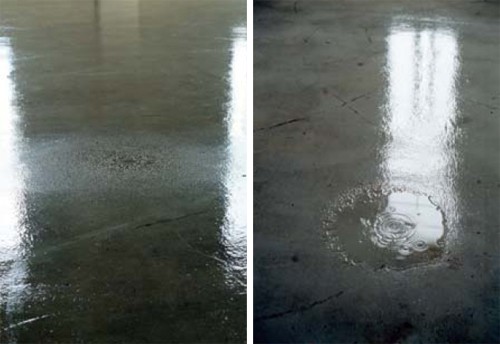 The joy of viewing things with others

— You’ve said that Being Called , which was shown at the Galerie im Karmeliterkloster in Frankfurt, Germany in 1997, was a turning point. What kind of work was this?

The venue was a long and narrow room approximately 10 x 30m inside a monastery that apparently used to be a dining room and along the walls of which was painted a huge fresco depicting the history of the Carmelites and episodes from the Bible relating to the order. Among the episodes depicted in the fresco were brutal scenes of persecution by members of other faiths and various miracles described in the Bible. I spent a few days there looking the place over, and it struck me that the people depicted there, as symbols, let’s say, were all actually dead. In reality the place no longer functioned as a monastery, but the people all around me, these dead people depicted in this mural, struck me as real individuals that had been alive like I was, and at the same time I thought of all the people who once lived in the monastery. I counted the number of people depicted, and it was around 304. For each of these people I made a small pillow just big enough to fit in the palm of a hand. Again, I had people view this work one at a time, but I arranged seven seats so that the viewer would sense the presence or the suggestion of the presence of other people. I think what I wanted people to try to remember was not that there were actually other people there, but that there are others in the world besides them.

– What was the meaning behind the pillows? Were they for the repose of the dead, like what you see from time to time in works by Christian Boltanski and Rebecca Horn?

Well, there’s an element of the repose of the dead about them, but there’s also the sense that as well as the dead, we, too, are being tama/anima . It involved scooping water from a reef by the sea into a conduit and breathing on it. The work was about vitality, and giving in return what we receive by “sending breath” out into the sea or sky. Also, I learnt about a traditional dying technique in which cloth is dyed using shellfish, and incorporated this into my work. The beautiful pink color from the juice of dead shellfish is transferred to other material. I got a real sense that at times like this people of long ago were conscious of anima or spirits, which made me happy.

For me, creation is all about gaining real insights into the world we live in through things like this. By asking oneself, What kind of place is the earth? Even though we may know the word for something, for me it’s like there is no world unless I actually understand it myself. If we consider the fact that things survive in the form of words precisely because our forebears experienced them and we ourselves can get a real sense of these things, then I think we can describe this too as a quiet sharing. Perhaps being able to sense that there are lots of people inside of us is one of the blessings of life on earth. 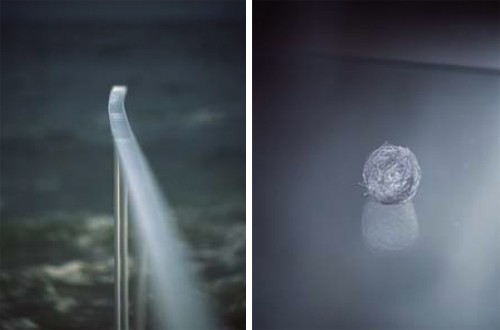 I want to feel I’m connected to the world

– For matrix , your 2007 solo exhibition at the Nizayama Forest Art Museum in Toyama, there was a piece in which people looked for but were unable to find letters of the alphabet that were supposed to have been written somewhere, and when I asked you about this just before you said, “Maybe they weren’t really there.” I’m even beginning to think you might actually be a “spiteful” artist (laughs).

The idea for that “spiteful” piece came to me in a flash while I was installing the main piece in which water trickled from the ceiling. At that moment, I was so incredibly happy I can still remember the feeling now (laughs). I thought I’d create a certain word, work out the spelling using letters of alphabet, and write these letters separately so that it was impossible to work out what the word was. Whether or not I actually wrote it on the floor there, which already had all kinds of markings on it, only I know, and I’ve never revealed what was actually written, but as an artwork it exists. I once heard that a child found it, but I suggested he could have been mistaken.

As to why I made a work like that, it’s because I cherish things that aren’t easily noticed and things I don’t really understand. Although it could stem from a critical approach that says it’s misleading to think people can understand anything (laughs). The world definitely isn’t as simple as that, and the whole process of noticing and not noticing things over time is something I’ve always been caught up in. This relates back to what we were talking about before, in that I think I actually want to feel that I’m connected to the world, that my presence isn’t unrelated to or divorced from it.

– Matrix is a work one “becomes aware of” over time in a space one doesn’t even know what to make of at first. Even if there were things I couldn’t find, I still felt, I’m being warmly welcomed into the world of Naito Rei. Is it not necessary for the viewer to get into it and understand it all?

I don’t think my works are meant to be analyzed closely. I think I’m probably aiming for something different from the kind of art you see in exhibitions where you analyze each piece closely and think, OK, OK, and then go home.

– You seem to be concentrating on installations these days. About the only instance where your work has remained intact is Being given , with the rest having been dismantled once each exhibition has run its course. Don’t you want to see your work remain?

I can’t really alter the fact that the work will be there for a limited time only given that it’s presented in an exhibition format. I always feel it’s very unfair when things that exist before my eyes are dismantled. It seems especially futile because I know there was something really good there. When there’s sheet music like there is in music then later generations can become involved, and even with theater and literature, people can enjoy a relatively close personal experience even as the times change, but visual artworks tend to be truly ephemeral. I’m well aware of this ephemerality, yet my work is still on the very limits where it’s a question of whether people notice it or not, whether they can see it or not. I make things that are so ephemeral they almost make people feel helpless. 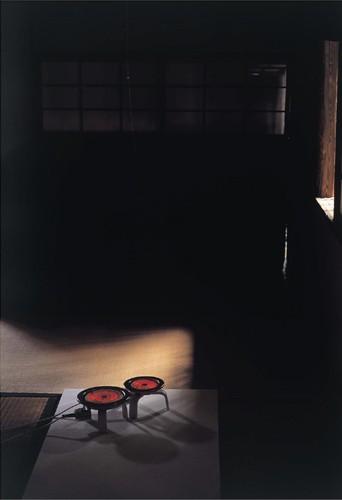 *This talk was given on 26 November 2008 at Kyoto University of Art and Design underthe auspices of the university’s ASP course.

Born 1961 in Hiroshima; lives and works in Tokyo. Graduated in Visual Communication Design from Musashino Art University. In addition to drawings and photography, she creates installations that encompass their surrounds by placing objects made of delicate materials in the spaces. For the Japanese pavilion at the 47th Venice Biennale (1997), she restricted viewing of her work Un luogo sulla terra to one person at a time, causing a considerable stir. At the 2008 Yokohama Triennale she presented an installation in a teahouse at Sankeien garden with a plastic string suspended from the ceiling that moved as air heated by a small brazier circulated. She has forthcoming solo shows planned at Gallery Koyanagi (Tokyo 3.24- 5.16) and The Museum of Modern Art, Kamakura (11.14-1.17). She will open a new space-based work on the island of Teshima for the Setouchi International Art Festival in 2010.