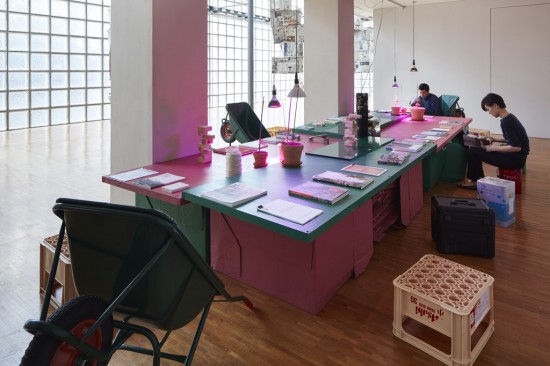 ART iT: You mentioned that you try to establish relations with the local whenever you make an exhibition, but the relations of locality are complicated when artists and artworks circulate internationally. When you bring something local outside of its original context, like the huasteco musicians, it necessarily becomes a comment about that context – and can potentially be perceived as exotic in the new context.

AC: It’s a risk. But it’s important to take risks. I don’t believe in doing the safe thing. It comes back to my ideas about learning. I’ve been discussing with the musicians about one of the pioneers of microtonal music from the late 19th century, Julián Carrillo, who recognized that the violin can produce more sounds than what we hear from conventional playing. He experimented by playing the violin with a knife, and then just by ear, empirically, he identified 16 subtones to a single note, which led him to the theory that there must be millions of sounds that we don’t perceive – which is true, of course. There were no computers back then. He did it just like that, with a knife. So I have the musicians playing with knives to recreate those experiments, and then it’s not about Mexico, and it’s not about ethnicity. It’s a way to escape from the cliché while still approaching traditional music as it is. It’s more about that kind of experimentation than it is about bringing Mexico or Mexicans to another context. Of course we are also doing that. What can we do? I’m Mexican. But we are perceived as a caricature only if we allow it to happen. I don’t mind if all people think is, Oh, these guys are Indians from Mexico. It’s true, partially. I would say it’s not the only thing though. It’s not only about Japan, it’s not only about the Nakagin tower, it’s not only about this or that. It’s all together. Everything overlaps, which is exactly how I work as a sculptor. I put things on top of each other, piling them up until they collapse. It’s a conceptual collapse. I enjoy it. It’s like a children’s game – conceptual Jenga.

ART iT: Of course, so much of how we think about the local is also rooted in problematic ideas about authenticity – especially in a place like Japan where there is a big romanticization of “Japaneseness.”

AC: Yes, but I think that’s everywhere. No matter how small, all nationalisms are dangerous – just look at history. But I’m not here to criticize Japanese society. I can speak about my own situation and my own identity crisis if you want. Of course, from the start I’ve been writing that I am not a “Mexican artist.” I’m an artist. It happens that I’m Mexican. But it’s an accident, not a choice.

ART iT: We’ve talked about Metabolism and microtonal music, but what is the significance of the other words in the title of the exhibition, “Obrera, Campesina, Estudiantil” (Worker, Peasant, Student)?

AC: They come from the old slogans used in political demonstrations in Mexico City. It was an all-inclusive social movement, with working-class people joining together with students, fighting for something that affected everybody.
Maybe people find my titles to be super confusing, but I like them that way. They are just descriptions of my own experience. Like the title for the “Blind Self-Portrait” piece I made here: “Blind Self-Portrait listening to the tunes of ‘La Josefinita’ while I remember Sergio González Rodríguez telling me to fear nothing but my own tears, crying about what you have no more and can’t get back, after eating some dry calamari roasted over a nice clay grill in a fancy restaurant, sipping little glasses of cold rice wine, pretending to write again all I’m kind of memorizing before typing down, but instead reading and reading again about a building some architects want to demolish” (2017). It’s just a description of what’s happening in the moment – what I’m listening to, what I’m eating, what I’m reading, who I’m speaking with. But it’s not actually there in the work. You can’t see it. It would be very strange if someone could see what I’m saying in the title in the work. It’s the same with the title of the exhibition. It can make a shift for people to think about something else – just not necessarily what’s in the show.

ART iT: Do you take a similar approach when you write the lyrics to your songs?

AC: No. Then it’s more about poetry. In this case, I was paying attention to the rhyme, of course, because it will be sung, and the meter and structure of the lyrics have to be very precise in order for the musicians to use them. They only got the new lyrics a day in advance. Then they performed and improvised while reading them. So the meter of the lyrics has to be sharp. And in order to achieve that I had to study how huasteco is traditionally written, so I read several books about the structure and metrics of these specific songs. In Paris we used the song called “El Sacamandú,” which originally talks about a bull that has been castrated, and then I wrote new lyrics for it – but in any case the musicians change the lyrics all the time by improvising. Here in Tokyo I wrote lyrics for the song called “El Llorar,” the crying. I like how at the end of every stanza they call out “Oye!” It means “listen” in Spanish. And they keep saying “Oye! Oye!” So structurally it’s like the song is constantly referring to itself, which also connects back to animism for me.

AC: Totally. And these guys are super cheeky. They make puns using my lyrics that I notice only when they perform. They are fun. 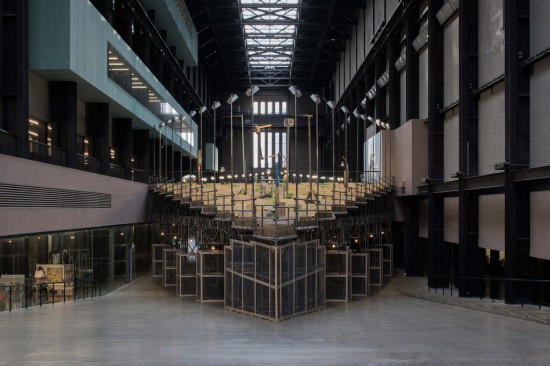 ART iT: Would you say your work provides a platform for different agencies to briefly come together and diverge at the same time?

AC: Yes. Again, it’s not planned. It’s more like organized chaos – clashes that turn into something unexpected. Of course I have to prepare in advance and can foresee how certain parts will turn out, but I love discovering and making things that are totally unexpected. This happens only through these collisions and clashes of overlapping things and materials, including myself.

ART iT: Have you read Amitav Ghosh’s book-length essay, The Great Derangement? Ghosh argues that the current environmental crisis results from a failure of imagination that was facilitated by the shift in modernist art to emphasizing the individual and the everyday at the exclusion of natural imagery.

AC: I haven’t read the book. It sounds fascinating. There is a friend of mine who is a historian and researcher at the University in Mexico, Humberto Urquiza. He became interested in the history of using waterfalls as an energy source, which is a far older tradition than people might think. So in studying the past it also gives him insight into the future of energy production. And it’s all about imagination, as you say – I’m learning a lot from him. I’m also learning a lot about the type of salamander that is in the show here, the axolotl. It might not be the most important part of the exhibition, but this salamander is a witness to the destruction of the environment. The biologist Luis Zambrano studies these salamanders. They are neotenic, meaning that they never develop into full maturity. But they also have a regenerative ability, which means that they could be a key to the search for the cure to cancer. So if these salamanders are driven to extinction, it could crush many hopes. It’s not just a funny pet. In Mexico it’s forbidden to keep them as pets, but here I found them on sale at Tokyu Hands, and bought one really cheap.

ART iT: Then it comes back to the question of who has rights. Do animals have rights? Does water have rights?

AC: Of course. Actually, historical studies show that there was a boom in the axolotl population after the Aztecs constructed their canal system around Lake Texcoco. The Aztecs built manmade islands called chinampas, which were used to cultivate crops like corn, chili peppers, beans and so on in a rotating system. The axolotl is indigenous to the lake, and it began to thrive after the Aztecs constructed the chinampas. So there was a beautiful relationship between human and axolotl. But in recent times farmers have shifted to producing lettuce instead of corn, which has destroyed the environment, while the introduction of carp into the canals that remain in the south of the city has also been a disaster. Now the professor, Luis Zambrano, is trying to reproduce the Aztec production system. It is a very time consuming and expensive way of growing crops, because it is totally organic, and there are not so many people who will pay extra money for the produce, which is not of such great quality. But for Zambrano it’s all about protecting the axolotl, not about getting food that is organic or healthier. This is a strategy that can only be done by someone like him. It is possible to reproduce axolotl in labs for medical studies on genetics, but such specimens cannot be introduced back into the canals because it would reduce the genetic diversity of the species – so there are lots of contradictions. Again, it’s not only about Mexico. It goes far beyond that. And if you look at the axolotl, it’s not even a nice animal. It’s super boring. It just lays there, does nothing. It doesn’t smile. It does nothing. The funny thing is that the one that is commonly on sale here in Asia is an albino, which is quite rare in Mexico. Someone must have brought it here to breed for the market. 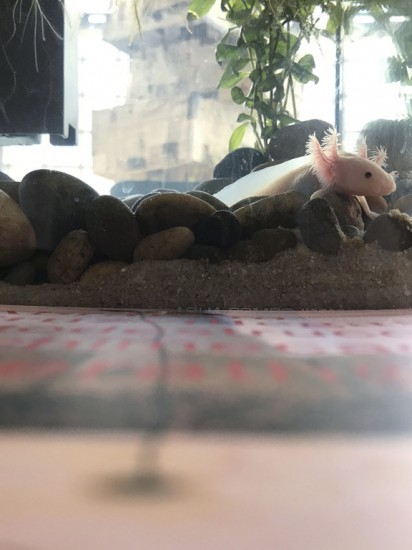 Abraham Cruzvillegas: At the Waterfall