Things that Happen When Falling in Love (2010), 18 colored and clear acrylic figures with printed mirrored letters, wire cables and fixings. Installation view at BALTIC Centre for Contemporary Art, Gateshead, 2010, with The Knots that Bind are the Knots that Fray (seven monitors) and “Surface Tension Studies” (13 photographs) in background. All images: Courtesy Raqs Media Collective.

ART iT: You say that love is a revolutionary engine. Thinking about the broad and messy notions of love in different societies today, the paradox is that while traditionally we assume romantic love is exclusive to two people, often that initially exclusive attachment is what opens up the space to love another person – a child, or a new lover, for example – and then more. Love is inherently polyamorous.

SS: Yes, I think first of all it makes a claim to the future, because when you love, your love has a temporally dynamic reality – if it is to be love. You can’t say, I will love this person for this hour. You have to at least love them for an hour and a half. So that half-hour of time that is yet to come presumes an expansion of consciousness and an openness to the unpredictability of the outcome of love. In most situations, we try to insure ourselves against unfamiliar outcomes. It is only with love that you actually open yourself to the fact that, first of all, you know that the person or persons you love will change – they will age and mature – and you’re saying, even if they do change, I will try to maintain my affections and my desires for them. It is a promise to change with the other as they change in order to keep up your desire for them. That for me is a certain way in which we welcome the future into our presence. One of the works we made on love, The Things That Happen When Falling in Love (2010), features a group of figures made of acrylic sheets that are inscribed with verbs. All the verbs are acting or doing words – thinking, feeling, doing, running, walking – all the things that you do that take the form of the present continuous, which is always a bridge between now and the future.

ART iT: How about the case of knowledge? On the one hand, you need knowledge to produce knowledge, which privileges those who are in power. On the other hand, even a little knowledge can be emancipatory – think about the self-organized study groups of the factory workers in 19th-century England, for example. Now, despite the tremendous access to knowledge provided by the Internet, with all the online scams and fake news amid the sheer volume of available information, it’s not necessarily clear how this affects the balance of knowledge. If you don’t know what to search for, you might never find it.

SS: It’s interesting you evoke the reading circles and auto-didactic groups of the industrial working classes in 19th-century Europe. I feel there has actually been a return to that spirit. There has been a great proliferation – especially among working people – of a new kind of auto-didacticism. People are teaching themselves, and not just on their own, but often in small circles. You find it expressed in a banal way in DIY culture or the cultivation of the self through fitness or yoga and so on. It’s clear that many people feel the need to continue processing the self in relationship to others.
In Raqs, we have recently been thinking about knowledge in relation to the infinite. Yes, it’s true that there are inequalities of knowledge. But consider that in 17th-century Europe there was a man called Athanasius Kircher, who is said to be the “last man who knew everything.” There may be a vast difference between, say, a latter-day Athanasius and you or me, but nevertheless we all exist in relation to the infinity of things nobody knows. We may be unequal in terms of our knowledge, but we are equal in terms of our ignorance. I find this is a very liberating thought. Both a polymath like Stephen Hawking and someone who cannot read the newspaper are equally ignorant. If we start with that assumption, then that allows a performative level playing field about what we can all know or desire to know. Let’s treat ignorance as a field of abundance: the abundance of things that have yet to be known. That opens out a greater degree of adventure. At the close of the 20th century, there seemed to be a moment where people thought, what new worlds are there to discover, what is left to know? but I feel we’re past that now. We have returned to a moment of wonder and curiosity. 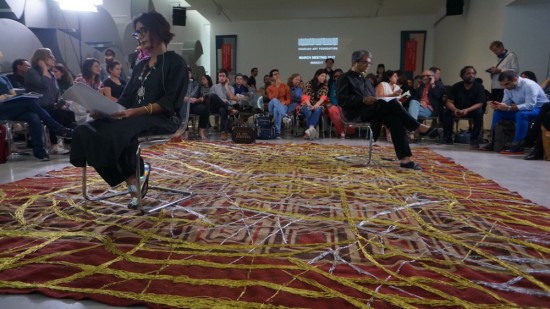 The Necessity of Infinity (2017), performance for the 13th Sharjah Biennial, carpet, embroidery and mise-en-scene, with text written by Raqs Media Collective based on the 10th-century correspondence between Al Biruni and Ibn Sina.

ART iT: Do you see your works as having a didactic element?

SS: They have an auto-didactic element. We learn through making the work. I don’t know if they can teach other people things, but I certainly know that my consciousness and my curiosities expand with each work we make. Other people might just plug in to the enjoyment. They might enjoy seeing us make fools of ourselves.

ART iT: I’m not particularly fond of the term, but the so-called “performative lecture” is something you seem to have quietly mastered.

SS: It’s economical. It lets you do many things within a certain timespan. For instance, in recent months we made a work for the Sharjah Biennale, The Necessity of Infinity (2017), which was a kind of staged lecture. But I think we are moving away from the lecture format now, because our performances are less didactic and more narrative, more theatrical.

ART iT: Perhaps it came up in your meetings with the students at the Global Art Program, but one of the thrusts of Japanese art over the past 30 years or so – and even further back into the artistic tradition – has been a privileging of subjective or authentic, individuated experience over the intellect or logos, which is seen as being conformist or reductive and inauthentic. To be sure, this is not just a “cultural” phenomenon but also a response to the highly competitive education and social advancement systems here, too. How do you understand the opposition between sense and intellect, body and language?

SS: I see the appeal behind it, it’s just that, being in a collective of three people, I have no option but to try to communicate my ideas to the other two. Each human being is a vast repository of the unknown, and I cannot afford the luxury of subjective intuition vis-a-vis my colleagues. It might be possible if I were a solitary artist, but I don’t know what that means. First, I doubt there is such a thing as an unthought gesture. The unthought gesture is actually a product of intellectuals thinking that they do something separate from other people, which gets mirrored perversely by people thinking that they are not intellectuals. In my experience, and in that of the collective I’m a part of, the sensation of thought is a very muscular, hormonal, instinctive process. It’s as corporeal as hunger or sexual desire, and I cannot say that thinking or intellection is in anyway separate from the body. The neural, which we are talking about, is a very bodily thing.
In fact, at the Global Art Program I told the students, “Each one of you is a collective practice, because you are a coalition of at least five if not six senses.” The five senses of hearing, touch, feeling, sight, taste all need some kind of language in common, and that language is what we normally designate as the thinking self, whereas actually it’s just the language shared between different senses which may be answering to the demands of different beings inside us. Indeed, the human body is itself a coalition of different organisms – only one of which is human – that are all speaking within us. 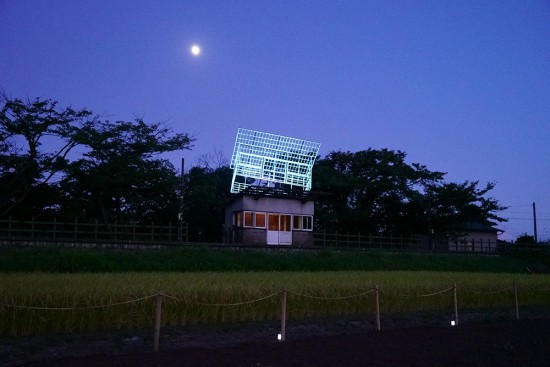 ART iT: You’ve spent time researching Zen, which has leached into mainstream Japanese society in a way that is quite different from how it is appreciated among the avant-garde in Western society. What are you looking for when you read about Zen?

SS: I’m looking for metaphors. I’m looking for a short-circuiting of processes that might otherwise take a long time. Without intending to belittle it, let me say that Zen is like the instant food of spiritual quests. Traditionally, the different heritages of the different schools of Buddhist philosophy and thought required intense amounts of cogitation and discussion. For instance, in the Indian Buddhist tradition, you could spend a whole lifetime just splitting the object in terms of its logical categories, which is perhaps the other extreme of a highly cerebral intellectual process. Zen cuts through a lot of that by saying, Hey, I can reach in three seconds what it will take you a lifetime to do. It’s the Futurist Manifesto of Buddhism, if you like. But it does rely on the iceberg under the water, which is at least 2000 years of intense philosophizing. Zen emerges at a particular point in time. It has a historicity. It has a renewed historicity now. But the Zen masters who say you can burn the scriptures need the scriptures to burn in the first place. That’s a kind of Zen way of putting it. Read before you forget.

ART iT: So what keeps you asking questions?

SS: The infinity of our ignorance, and the fact that that’s a delightful thing.