ERECT AS SIN
By Andrew Maerkle 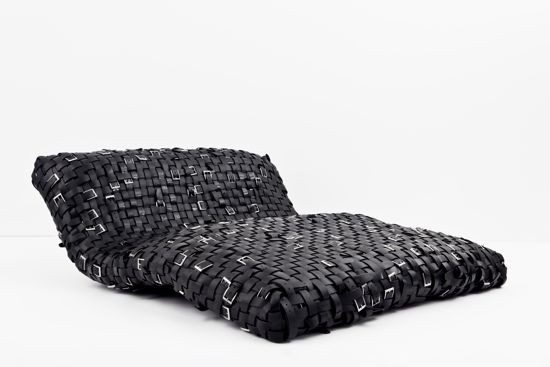 Based in Berlin, Monica Bonvicini is known for works that critique prevailing Modernist values by reinventing iconic forms through unconventional materials. In particular, her use of metal chains and leather straps and harnesses – suggestive of S/M subculture – introduces a radically bodily dimension to the antiseptic functionalism of classic 20th-century design. In other cases, her smashing of the plaster partitions and glass panels that she incorporates into installations and sculptures, and her spraypainting of graffiti texts onto the walls of exhibition spaces, adds a more explicitly political dimension to her work, as an acting out of resistance to constructed environments and the principles they uphold.

In this four-part interview, ART iT discusses with Bonvicini topics ranging from the intersections between political commitment and artistic expression to the psycho-sexual dynamics of looking and the creative potential of broken language.

I. Always to keep a distance

II. I believe in the skin

I. Always to keep a distance
Monica Bonvicini on the intersections between political and artistic expression. 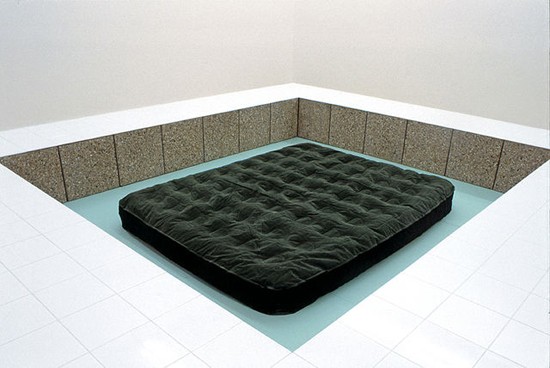 ART iT: I’m interested in the idea of political expression and how we communicate political stances. Your works are often interpreted as advocating a feminist viewpoint and a critique of the Modernist male establishment, yet they also put forward a formal commentary on minimalist sculpture and architecture. In this context, do you see your works as being political statements?

MB: It’s interesting you begin with this question because there’s a new discussion about art and politics here in Berlin, partly triggered by the upcoming 7th Berlin Biennale [directed by Artur Żmijewski, who has made the political positions of artists a focus of his curatorial premise]. Before I answer, I would be thankful if you could tell me from your side: When is an art piece political? You mention that my work has often been quoted as being feminist, and apparently for you to be feminist is already a political statement.

ART iT: For me it’s a broad interpretation, but political expression would have some kind of agenda; it would contain a message or critique that elicits an action or response. At the same time, I think there’s a distinction between something that pushes against an existing social structure and something that critiques an artistic tradition such as Modernism. I feel that with your work you do both, for example, as in Bedtimesquare (1999), combining the form of a Carl Andre sculpture with a bed. I’m curious about how you balance these two concerns in your practice.

MB: I grew up in Italy in a very political climate, when there was still a lot of influence from the 1970s Left movement. In the 1980s it was not quite so radical, but when I was in high school I participated in many demonstrations, strikes, talks and other activities. I grew up thinking that there is no way you can do anything related to culture without being political. It was not until I moved to Berlin that I realized from meeting colleagues and other people that what was simply the Left for me was for them in fact a totally radical Left.
I also grew up with the idea that artists and cultural producers have a responsibility toward society and the public, and it was natural for me to think that way in terms of art. I initially studied painting for several years, then stopped. Maybe it was not such a conscious decision, but I felt that painting was a far too lonely activity, and that I couldn’t make the impact I was seeking through paintings. Since then, my work has always involved other people. The year I studied in California at CalArts was also influential: art was thought in such a critical way that even if it was not explicitly political, it was very political.

ART iT: In Japan from the 1950s to ’70s there was a very influential student movement, but such broad-based activism has now largely disappeared, perhaps related to the 1980s bubble economy and the subsequent economic crash. I am interested in your experience in Italy at the tail end of the student movement there. Can you discuss more the atmosphere and your influences of the time?

MB: At the time, the student movement was still very influential. Maybe because Italy is such a Catholic country, there was always this strange way of reading communism and embracing it more naturally than, for example, those who grew up in West Germany and had East Germany as the inescapable representation of communism.
In high school, my economics teacher was a radical Leftist who had studied sociology with Renato Curcio in Trento and would come dressed as if it were still the 1970s. I respected her for going around in these loon pants while everybody was making fun of her. She taught an ultra-Marxist interpretation of banking systems, and since then of course I know that every bank is institutionalized theft. And my German teacher was in the city center everyday collecting signatures to free the Brigate Rosse.
We read Das Kapital together, Lenin – I was in a Trotsky group for a while – it was a little bit romantic…I never had any heroes and don’t believe in heroes, but the people I looked for had been “fighting for a better world,” and all of them were in prison.
There’s a sentence by Lenin I like and often think of when I work, saying that we have to be more radical than reality. I love that idea because it makes you ask yourself what it means, makes you question what reality is for you. Of course the reality I live now is totally different from the one I lived 10 years ago, and reality in general is changing so fast: is it possible to still be more radical? What does it mean? Are people going to understand it, and do I want them to understand it?
In the 1990s, every show had a “chilling space” with couches and videos, and that was exactly what I did not want my art to be. Sometimes art can be relaxing, but it doesn’t have to put me to sleep. 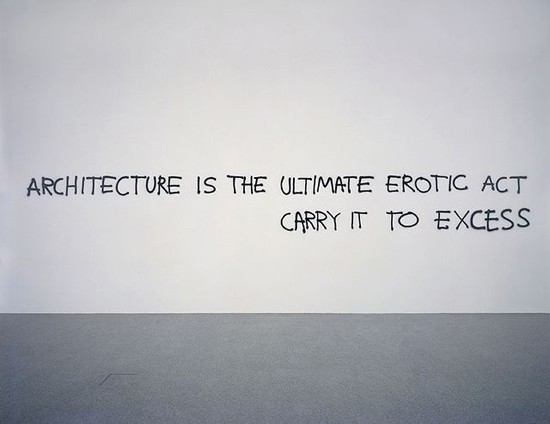 ART iT: Then when you make a new work, do you necessarily intend for it to communicate a critique or agenda to viewers?

MB: It differs from work to work. Sometimes I like to do something without knowing what it will become. But whether it’s an institution or gallery, if I’m working directly toward a specific show then of course I also think about the setting, the collaboration with the curators and the impact the work will have. This is especially so if it’s an exhibition in a city I don’t know – which occurs more and more frequently over the past decade – and I am not familiar with the audience.
When I started in the 1990s, Berlin was so small that I literally knew everybody in the art scene here. I knew what I wanted to do in order to address something that nobody else was addressing. There was a lack to which I responded, because I didn’t find anything that really intrigued me and I realized I had to do it myself. Now, working internationally, it’s strange to do a show without knowing the audience. Often the only person with whom you have contact is the curator, alongside some prior knowledge of the institution and its exhibition history.

ART iT: Does that situation necessarily depoliticize the work?

MB: No, but I often see that if I place the same work in different institutions and cities, the receptions will be different, and depending on the people the readings can go more in one direction or the other. People do not react only to the work alone; they also react to the museum or to the program of the curator. Sometimes it can be limiting, but it can also give you more freedom because you risk more in stepping into that situation.

ART iT: Would you say your youthful experience of radical politics in Italy has fed into an ethos that you apply to your art making, but is not something you’re trying to historicize in your works?

MB: Yes. It’s just a part of my education. In the 1990s I made a number of works based on gender theory, which at the time was heavily fashionable. From there I moved to work on fetishism. If you research sex and fetishism in space, then you have the Marxist interpretation, the feminist interpretation, the liberal interpretation. But I wouldn’t do any work now on Marx or Che Guevara or something like that, just as I wouldn’t do any work on actual politics. I’m not interested in what is in the newspaper now. I’m interested in what is in the books that are analyzing what was in the newspaper. I think it’s important always to keep a distance.