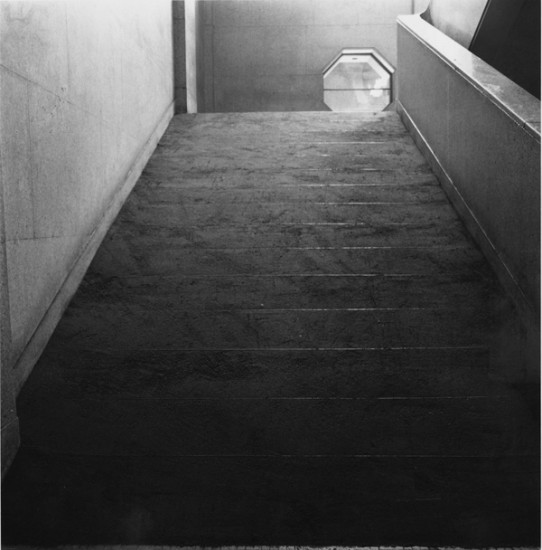 ART iT: We’ve addressed different aspects of your concept of activation, but in your writings you also discuss the situations that you create in terms of “abandonment” (houchi), as though the materials arrange themselves rather than being arranged by the artist per se. In using such a term, were you seeking to separate objects from the causality of actions?

KS: To see something is to know it. This is not just about looking, it’s also thinking about what it is that you are seeing and processing it cognitively. Seeing itself is already intricately involved with action and as such has formative and constructive implications. In essence, to see something is to create that thing. Among the five senses, sight is the most powerful. It is inherently cognitive, and it is our primary sense for distinguishing between different things and situations. Touch is limited to touch, or smelling to smelling, while taste is focused on the tongue, but sight can synthesize all these senses. If you see someone drinking, you can imagine how the drink tastes. Sight is incredibly profound. Formative practice begins with the eyes. And then in being seen, the thing that is seen becomes linked to human action and assumes a formative reality.
So when you ask why I use the word abandonment, the rationale returns to my ideas of formative practice being about the existence of things, actions, and site. The problematics of site are what relate to abandonment. In other words, if you have something somewhere, then that thing occupies some site: I am here, I occupy this site. Nobody else can enter where I am. You occupy your own site. Somebody else occupies another site. The word “abandonment” is literally thought of as referring to a situation that has not been prescribed by some outer agency, but if we consider such a situation from the viewpoint of the thing that is “abandoned,” spatially and temporally, that thing is simply occupying its own position.
Even if it does not have an immediate formative connotation, simply in being some place, a thing commands attention. If there is something in the middle of the road, then you have to go around it, or jump over it. Just by being there it induces human action. If you have a big tree somewhere, somebody might come along to chop it down. The tree itself is what incites the human action of “chopping.” If humans did not coordinate their actions trough things, then even walking though nature it would be impossible to distinguish all the things around us. So from the start, the concept of abandonment begins with an understanding of existence, in both space and time, as a form of occupation.

ART iT: In that sense is it possible for even a living thing to be “abandoned,” and in reverse for inanimate objects to exhibit a kind of will?

KS: Certainly both apply. In the example I just gave about the thing in the road, if a living being or agent goes around it or jumps over it, this is not just an agent responding to an obstruction, it’s a mutual interaction between obstruction and agent. I always consider this in my installations. I understand that if I put something somewhere, it will prescribe certain actions. If you hang a rope somewhere, people will pull it. If I’m working with a branch, I might try straightening it out – not enough to completely transform the nature of the branch, but just enough application of will to create a sense of disturbance. I’m not transforming or destroying the whole thing, only part of it, through a slight movement.
That’s how I make my installations. I put a rock someplace, and then five minutes later I come and flip it over to see what happens. Even that makes a big difference in how the object occupies the site and how it is perceived, and that’s ultimately what I hope visitors to the installations will sense. Things have multiple aspects, with incredible implications, and they generate diverse situations. If I create a situation in the gallery space, then in that case I am showing one aspect of one situation related to some thing. I want people to understand that even if they only see side A on display on the gallery space, there are also sides B, C and D as well. That’s the kind of situationality I’m trying to create in my installations.

ART iT: This may be a little off-topic, but certainly the idea of occupation has taken on new currency through the protests of the Arab Spring and the Occupy movement in the United States and other countries. People are seriously reconsidering how their bodies occupy space and what they can express through the placement or massing of their bodies. Did your concept of abandonment also account for such political implications?

KS: Yes, it is connected. There are countless, infinite places and things that we cannot comprehend. Simply to be alive does not mean that one has total consciousness. And it is important that there are things that cannot be comprehended; it’s important to understand that there is a limit to one’s awareness, and that there are hundreds and thousands of countless things that support and make visible what one perceives. As for what one cannot perceive, maybe it requires another person to perceive it, although there are also things that simply exist beyond anybody’s notice, like a rock in the middle of a desert. And it is the very existence of such things that makes everything possible.
I am always opposed to the idea that artists have the role of creating the world, or the idea that an artist has free reign to depict his own world as if it were the world. There is something like a worldview that precedes everything. This is not only the world that the artist is seeking, but rather something like a world that all people seek. It’s just that the ordinary person does not have the means to perceive this world, whereas an artist at least attempts to see into it, or create a form of expression that can investigate how it exists. And in doing so, something that was not apparent until then suddenly becomes visible: for example, the form, role, value and awareness of some thing might become apparent. At this moment of transformation, it becomes possible to think the world is somehow different from one’s first apprehension. But the world itself is already there, whether one investigates it or not.

ART iT: I’d like to return to discussing “the will of things.” For example, in the work Limitless Situation (Stairs), which you made in 1970 at the National Museum of Modern Art, Kyoto, in flattening the sand that you piled on the stairs, how did that relate to the will of the sand?

KS: As everybody knows, sand is a fine, grainy material that is capable of flowing, almost like water. If you grab a handful, it slides away between your fingers. This is of course partly because each grain is so small, so sand’s ability to “spill” can be considered a matter of units. When I made the work in Kyoto it was the start of the 1970s and thinking about nuclear issues, and about what things are actually made of, were prevalent in the general creative sensibility. In other words, we were doing something like mathematical theory. This thinking about molecules and atoms as components of the world had first emerged as minimalism, and the idea that things could gradually be made smaller or more compact, to the point of reaching an elemental core, which could then be extrapolated back again to visualize how particles combine to form a shape that derives its form, texture and sense of materiality from how its components are agglomerated together. So for us, thinking about how to deal with different materials started from a particle level. In that sense sand is small – not as small as a molecule or atom, but small enough to spill out of one’s hand. But its individual units can also be consolidated or gathered together to make something, if one has the right methodology.
In Kyoto I used the stairs, but really I felt I could make anything sculptural – even a building could become material, because even though it might have people living in it and different activities taking place inside, it would still be a space. But as I explained before, I choose materials based on their potential for situations of interdependency. If I’m working with a stairwell, then I think about how to affect the interdependency of the stairs in the preexisting structure, and how to alter the existing system. That’s why I thought of blocking the stairs off with sand. Then because stairs are stepped, I thought it would be interesting to smooth out the surface of the sand. And then everything became smooth, with only the outline of the stairs visible. So I think about materials even from that particle level and then think about how to match them to different structures.

KS: Certainly. It would have been odd not to. There’s no way the space wouldn’t change if you brought in something that was not already there. The question is how to control that change, and that question is what links to formative practice. All the decisions about where and how to place things add depth to expression.
If art is understood as something that can shake up people’s consciousness, then making art must involve creating something that people have never thought of. And because once they have been unsettled people try to process the event through a response, this enables a kind of consciousness to develop. If this process is not there then art is not interesting.

ART iT: Is there any possibility, then, of escaping the visual realm?

KS: I should think so. There are situations in which things disappear from sight just as there are those in which things appear. I constantly recreate these situations in my work. But even in repeating the same action, you never get the exact same result. Living itself is about repetition. In any case, that is why I destroy existing things – annihilate them. No matter what, all things disintegrate and disappear. It may take centuries or millennia, but they will eventually be eradicated. In working with objects it’s essential to understand this.
That’s why I try to use abandonment – and I’ve abandoned many things in galleries over the years. There are people who disapprove of what I do, of course. But that’s what art is about. Even if it seems pointless to some, it is certainly not pointless. It begins in the depths of archetypal consciousness. Then slowly things become clearer, or more articulated, and it becomes possible to create a kind of context for everyone to share. It doesn’t even have to be such an intense shared consciousness, but if there is no context then it will be impossible for anyone to understand. But in terms of abandonment, there are people who get it and people who don’t, and I think that’s fine.

ART iT: Could we think of formative practice as a way to measure the world?

KS: That’s it. It’s not the entirety though, just one part. One perspective. First we start with some thing. Then you have a person, then an action. It all begins from an extremely simple premise.