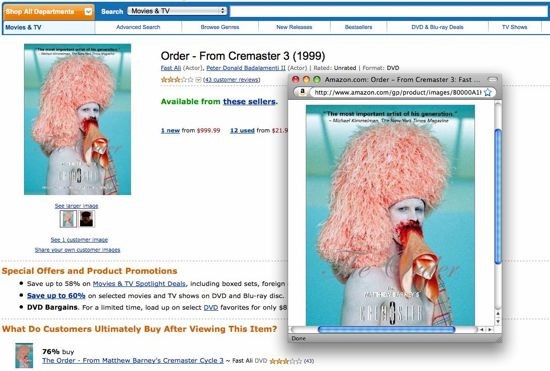 A few weeks ago, an art cinema in downtown Manhattan held a public screening of the complete Matthew Barney Cremaster cycle. While I was weighing my desire to sit through what would surely be a cinematic marathon against the amount of time I was prepared to devote to such an adventure, I was struck by some odd wording in the newspaper listing. Apparently in an effort to gloss over the fact that unlike nearly every other cinematic creation still extant, Cremaster would never, ever be available to the public in DVD or other mass-market formats, the listing cited vague “licensing agreements” as shorthand for something readers shouldn’t waste any effort trying to unravel. For the first time, it occurred to me that the conditions surrounding Cremaster‘s distribution constitute one of the costliest and most pointless blunders in recent art history.

Why costly? Impractical perhaps, and definitely inconvenient for the vast majority of would-be viewers, but who exactly loses on this deal, and how? The short answer requires that one momentarily adopt the mindset of a Barney fanatic (I’m not, although I know several), and assume for the sake of argument that the seven-hour epic, released in stages between 1994 and 2002, is in fact a masterpiece. If that is indeed the case, then its importance will presumably grow in coming decades, meaning that demand will also increase. Meanwhile, as art histories are published, academic curricula developed and museum programs produced, an ever larger number of professionals and academics will need to see Cremaster at their leisure and on their terms, simply to evaluate it, catalog it or pass it on to the next person. This, apparently, is not to be permitted, with the result that not only have potential profits from the general distribution, licensing, and sales of Cremaster been negated into perpetuity, but those who need to view the cycle in order to evaluate it for others have largely been stymied in their efforts to do so. Instead, Cremaster is treated as a kind of destination or event, with controlled screenings on an extremely limited basis in cities large enough to host an art cinema, and with a single disc of Cremaster 2 selling at Sotheby’s, New York, in 2007 for USD 571,000. [Note: the Amazon ad illustrated here is for an excerpt of Cremaster 3 called The Order. A new copy of the 30-minute excerpt retails for $41.]

To answer the question of cost adequately, however, it’s helpful to look back at the Golden Age of avant-garde video practice, the 1970s, to appreciate how the introduction of portable video-recording equipment a decade earlier sparked a creative revolution on the part of a generation of artists who seized upon the new technology as a way of testing and bending the parameters of visual perception. Artists with roots in Conceptual Art, such as Vito Acconci, Dan Graham and Bruce Nauman, quickly became pioneers of a medium that was neither fully television nor cinema, but at its best combined the most compelling features of both. Within a few years, avant-garde choreography and performance art also became fertile ground for new video practices, and certain long-held distinctions between documentation and what would soon be labeled “interactivity” began to erode.

In the early 1970s, Leo Castelli and Ileana Sonnabend opened Castelli-Sonnabend Tapes and Films in recognition of the fact that many of the respective artists they represented were deeply committed to this new art form. Although several of these same artists worked in other unconventional media, and while the development of Earthworks, Minimalism and Conceptual Art forced the galleries that showed this work to reconsider strategies of selling art, until video the laws of supply and demand, applied to the very narrow base of collectors for these works, created a captive market. Only a handful of buyers existed for an even scarcer supply of original works, which is why Leo Castelli was able to charge nearly the same amount for the right to fabricate a Dan Flavin sculpture at an undetermined time in the future as he could for a finished work.

However, when the brand-new medium of magnetic tape hit the art market, the change in pricing was sudden and dramatic, in part because video came to be perceived as part of a larger DIY movement that included performance art, punk music and small-press publications. Perhaps because of their enthusiasm for its reproducibility, artists themselves began to insist that their works be priced the same as if they were the products of a small press or Indie label. Thirty-five years ago, the number of potential buyers for a Joan Jonas or Robert Morris video might not have exceeded a few hundred persons a year, but since the work could be reproduced cheaply and an unlimited number of times, it was considered reasonable to suppose that a $25 video selling a hundred copies a year over the 10 or 20 years would realize comparable returns to a unique painting or sculpture.

The practice of pricing video art according to this broad base of buyers came to an end in the mid-1980s with the emergence of video installation as a separate medium. Suddenly, artworks by Dara Birnbaum, Gary Hill and Bill Viola, among others, could only be experienced in a carefully calibrated environment. Partly in an effort to control how such installations were presented, and partly as a result of video’s newfound popularity with artists and curators (if not, at least at first, collectors), the limited edition video was born. Between the late-1980s explosion of video installation as a medium and the emergence of Matthew Barney in the early 1990s, however, the most significant accompanying change was the rapid ascent in prices for contemporary art in both the primary and secondary markets. By 1995, it had become fairly commonplace to encounter single-channel videos described as “limited editions,” which were priced accordingly in the tens of thousands of dollars.

Before the downturn, art galleries justified this radical pricing shift by explaining that they were not set up to handle thousands of units of an artwork for insignificant amounts of money, as is the case with the music or home-video markets. Furthermore, some argued, production budgets for such videos had themselves increased, so that artists required a greater level of financing. Finally, there was the rationale that if dealers were trying to convince important art collectors to buy video art, imposing some level of scarcity was necessary to justify the prices such collectors expected to pay for important works. Within a few years, however, it was apparent that the inherent arbitrariness in pricing video was being abused by some galleries, and prices kept spiraling upward.

YouTube posting of Ryan Trecartin’s A Family Finds Entertainment (2004), from the
artist’s own channel.

From a 2010 perspective, such maneuverings clearly did not anticipate the growing significance of the Internet to all media-based art – in particular the role of YouTube and similar technologies in furthering the first rule of information technology: to be free. Today, if we consider an up-to-the-minute video artist like Ryan Trecartin, that first rule becomes a kind of self-fulfilling prophecy: everything Trecartin produces appears to have been conceived, developed and edited to facilitate uploading and video-streaming. There might be objects made by Trecartin for collectors to buy, but they are not essential or even terribly germane to the work itself, which is available anytime we want, on our laptops or our iPhones, for absolutely no money. Considering this open access, it seems hard to imagine finding ourselves where we were back in 2004, when Barney had his Guggenheim Museum retrospective featuring, as sculptures, the baroquely decorated display boxes in which the “limited edition” Cremaster DVDs were displayed. Resembling overpriced selections of chocolate or perfume, those display boxes symbolize the elaborate contortions of reality into which the art market twisted itself nearly 20 years ago, the result of which is that there is now a vast history of avant-garde cinema and video preceding Barney that is either free or reasonably affordable, and a galaxy of cinema and video post-Barney that is also free or reasonably affordable. Trapped between these infinities like an insect caught in amber is a tiny artifact of man-made exclusivity – the quintessential artwork of the Information Age, we are told, and none of us can watch it.