Toru Narita (1929-2002) who played an active part in a sculpture, a picture, a design, an illustration, special effects art and many divergences. It is the first-ever great retrospective show to introduce the total picture to by a work, the document more than 700 points. I approach in the unknown total picture of the Narita art including the monument of the huge ogre who is a picture, a sculpture in in mighty Jack and human, work of the special effects art such as van kids, the unpublished monster design original picture, early days and the after 1970s, the masterpiece in later years without one action showing 187 points of monster design original pictures of the Aomori Museum of Art possession, and becoming. Watch it with keen interest in “the trace” of the genius artist agonized in “the times” and the “flash of light”! 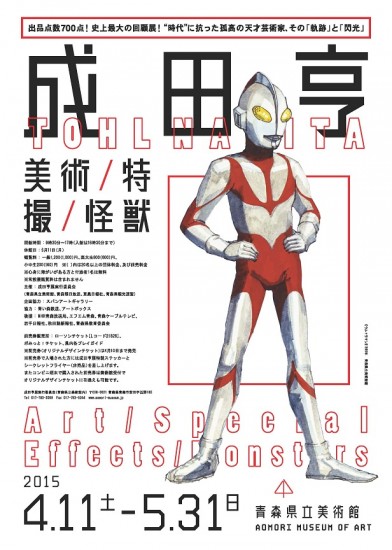 ※The advance ticket (original design ticket) is released until April 10
※It is a Toru Narita exhibition specially made sticker and secret fryer in entered with an advance ticket
(article not for sale) I give を. In addition, the advance ticket which he/she purchased at a convenience store terminal is available for exchanging it on an original ticket at an art museum reception desk.

[exhibition summary, the highlight] placed Toru Narita (1929-2002) as one of the important writers in Aomori Museum of Art, and always showed a part of the monster design original picture in a permanent exhibition until now. However, the display that work of “the ultra” was the center conveys one side of the artist called Toru Narita.
Toru Narita is a sculptor, a painter, a designer, a special effects art director and the writer who worked on the various expression beyond the fence of the genre. After meeting painter, Gosei Abe during old system Aomori Junior High School (existing Aomori Senior High School) attendance at school, and having learned technique to make much of the structure of the motif and the constitution from Keiji Kosaka of the sculptor by a way of thinking to value “an essential impression” than the technique representing the picture more, I learn a picture, a sculpture in Musashino Beaux-Arts (existing Musashino Art University) and come into the limelight as a spirited sculptor on the stage of a production exhibition newly. On the other hand, after that, triggered by having participated in production of movie “Godzilla” (1954) as a part-time job, a lot of work of the special effects art dealt, too. “An ultra man” was in charge of the designs such as a hero, an alien, a monster, mechanic or the set in “ultra seven”, and, production, televised “ultra Q,” he brought about an excellent character called “Narita monster” in sequence from 1965 through 68. By the prominent molding sense that high artistic sensitivity of Narita was reflected, “the Narita monster” continues being still loved at the present that passed for nearly 50 years by broadcast and is it. After “ultra,” “a Shinkansen size blast” and “war and a human being” continue the work announcement of an oil painting image and the sculpture mainly on a private exhibition by the movie including “a disk war van kid” “mighty Jack” and “charge human” by the TV program while they deal with the special effects such as and “I leave this child” “descriptions of mahjong roam”. In addition, interest in monsters of all ages and countries and Narita who deepened knowledge produce huge sculpture “ogre monument” (Fukuchiyama-shi, Kyoto) in 1990, but it may be said that this product is a work of compiling it into one book of Narita as the sculptor.
By this retrospective show, I introduce the total picture of the work of Narita over such many divergences. I approach in the unknown total picture of the artist who hid unusual talent by 700 points of total amounts including a picture, the sculpture in in a special effects-related work, the unscreened monster design original picture, early days and the after 1970s including 187 points of ultra-related design original pictures of the Aomori Museum of Art possession. 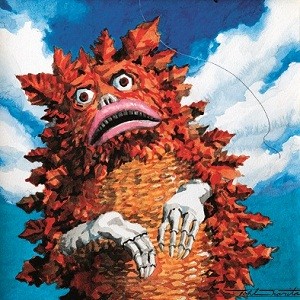 ・The first large-scale retrospective show to introduce the total picture of artist, special effects art director Toru Narita related to Aomori to!
・With the number of approximately 700 points of overwhelming works including a large number of first public exhibition works, I press the essence of the Narita art.
・187 points of ultra-related design original pictures which Aomori Museum of Art possesses released one action!
・In addition to human and a van kid, the plan that terminated in the illusion, a work of the enthusiast appendix slaver including the unpublished monster, I can overlook activity of Narita that transcends the genre including the sculpture of the ogre who dealt in valuable initial work, later years, and was active.
・The set of the movie which Toru Narita dealt with is completely reproduced by the staff at the time. You photograph it with a camera and can really sense the difference of the picture of the set bodily.

[display constitution]
1. The initial work 1950-60 generation
Narita introduces an early picture, sculpture after starting activity as an artist. I inspect the association with the later special effects art.

2. Ultra 1965-1967 years
Narita introduces a hero, ultra Q which dealt with the design of the monster, an ultra man, ultra seven. The design original picture which Aomori Museum of Art possesses shows one action. 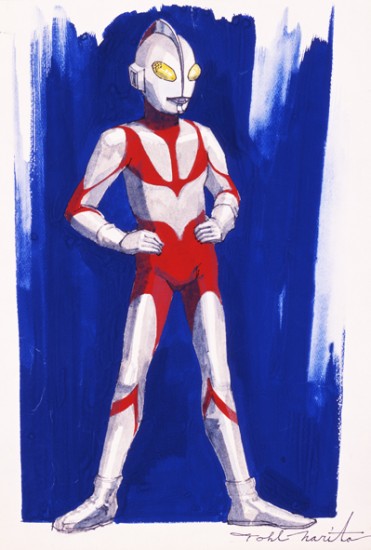 3. Mighty Jack 1968
I introduce the design original pictures of mighty Jack whom Narita dealt with parallel to ultra series. 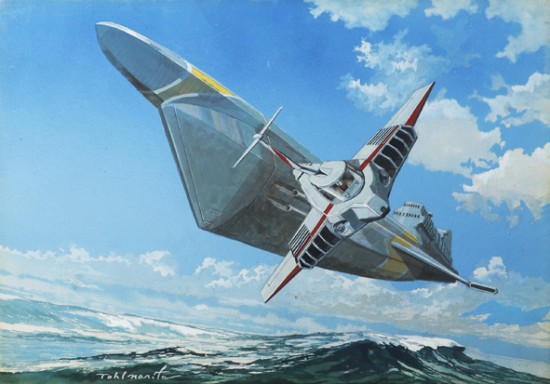 4. Human 1972
The special effects program of the illusion that Narita played a key role of the plan after having left the Tsuburaya professional, and dealt with “a charge! Human shows a の-related!document on a cathedral.

5. Van kid 1976
I introduce the enemy character design of the van kid whom Narita names “the best masterpiece”. 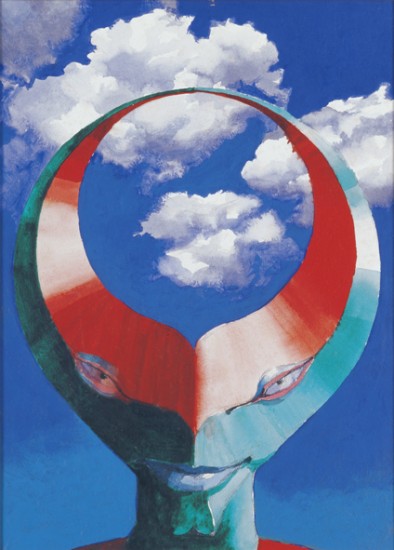 6. I released a work, the document about the plan of Narita that was over for an illusion in the マヤラー /U gin plan plan 1 1970-80 generation that I did not realize.

7. Unpublished monster 1984-87 age
The new monster which enormous numbers were drawn on with a personal request. I introduce the design original picture which was hardly known at one sweep until now. 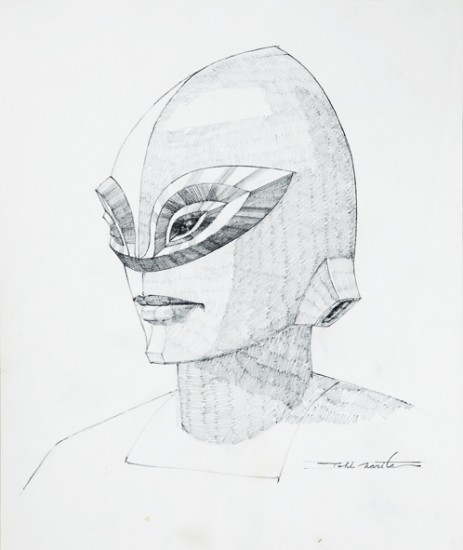 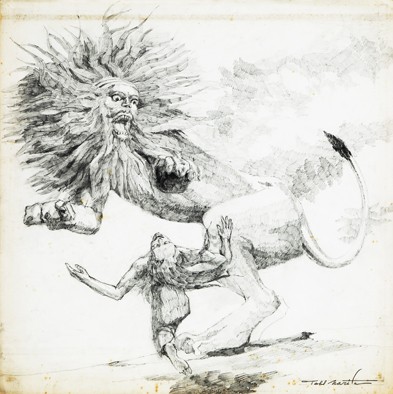 9. I divide illustration group almost the result of the monster study that Narita worked on in the monster 1980-1990 generation of Japan, the Orient into West and two of the Oriental monster and introduce. 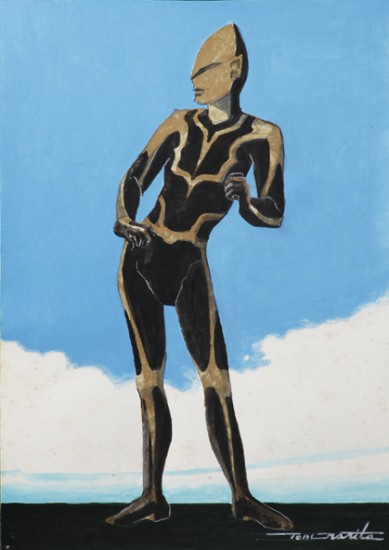 11. A huge sculpture of picture, sculpture 1990 of the 1970-90 generation introduces various oil painting, sculptures which Narita dealt with including “the monument of the ogre”. In addition to a thing with a person and scenery as a motif, the work about a monster and the mechanic introduces at this corner, too. “Oil painting” for Narita considers anything with “a sculpture”. 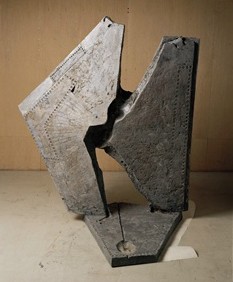 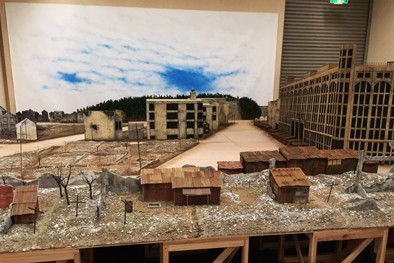 [allied plan]
■Commemorative lecture
(1) Mr. Narita style village (Mrs. Toru Narita), the Narita nautical mile he (Toru Narita a son, an actor) date and time: You invite Mr. style village and Mr. of the wife who shared the joys and sorrows with Toru Narita nautical mile that is a son for many years for from 14:00 to 16:00 on Sunday, April 12, and, about a person and art of Tooru Narita, please talk with the episode only by the family.
(2) Takashi Murakami (artist)
The date and time: Artist, Takashi Murakami playing an active part on the stage of the world for from 14:00 to 15:30 on Saturday, April 25 raised its Tooru Narita as one of the artist affected most and always paid attention to the high artistry of the Narita work. Please talk about the essence of the Narita art from the viewpoint as the artist this time.
(3) The Mr. Noi Sawaragi (art critic, Tama University of Arts’s professor) date and time: Mr. sawara cypress which announced a lot of studies about the contemporary art for from 14:00 to 15:30 on Saturday, May 9 paid attention to the talent as the artist of Toru Narita quickly from the 1990s. From the viewpoint of the art critic, I clarify a characteristic of the Narita art.

※(1) (2) (3) Together
A meeting place: Aomori Museum of Art theater attendance charges: Free (but a Narita exhibition ticket is necessary)

■The date and time when a workshop “mends the model of the art museum:” A Sunday, April 26 from 13:30 to 17:00 lecturer: We make a construction of Toru Murayama (representative ムトカ architecture office) art museum model, and we intertwine it with a monster, and let’s play!
A meeting place: Aomori Museum of Art workshop B participation fee: Free of charge

■Parent and child gallery tour
The date and time: It is a meeting place for from 14:00 to 14:30 with the every day on Wednesday (holiday) for from Saturday, May 2 to 6th: Aomori Museum of Art exhibition room participation fee: Free (but a Narita exhibition ticket is necessary)
※There is a participant present

※Please confirm it about the latest information, the details of the event in homepage https://www.aomori-museum.jp Facebook https://www.facebook.com/aomori.museum Twitter https://twitter.com/aomorikenbi.