THE MULTIPLE LIVES OF IMAGES
By Andrew Maerkle and Natsuko Odate 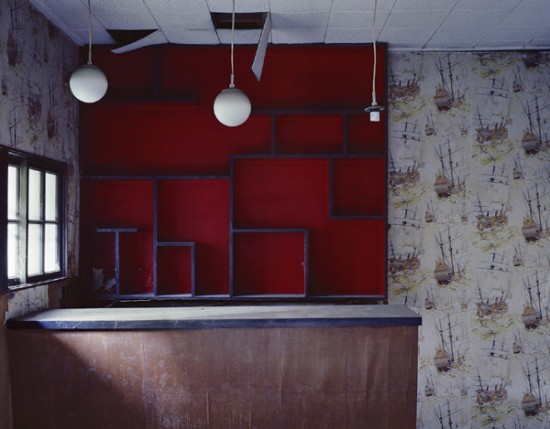 In her photographs Tomoko Yoneda compresses multiple layers of history into a single image. She is best known for her project “Scene,” for which she visited former sites of conflict around the world, photographing them in their current, innocuous states while fully cognizant of their past significance, which she relates to viewers through titles that provide a frame for viewing and responding to the resulting images. The effect of this is to heighten every detail in each image, to give every last bench or shrub or building in the image the same importance as the whole, creating a telescopic relationship between the eyes of the people who participated in the referenced events, and the eyes of the photographer and the eyes of the viewers.

Yoneda is currently participating in a residency at Tokyo Wonder Site, where she is working on a new series that addresses the legacy of Japanese modernization from the Meiji era onward. ART iT met with Yoneda to discuss her practice in greater detail, and to learn about how she is responding to the historic events of the past year.

I. Frames of Reference

I. Frames of Reference
Tomoko Yoneda on the moment when history and present meet in an image. 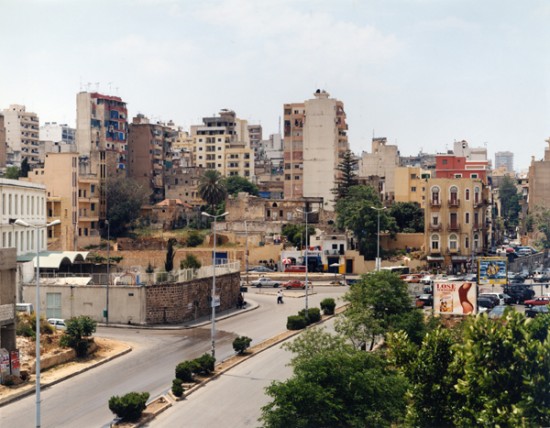 ART iT: You are perhaps best known for works, such as Sniper View – View from Christian sniper position overlooking no man’s land, Beirut (2004), which possess a kind of dual or split identity through the disjunction between the everyday scenes they present and the context that literally frames their composition. Such works simultaneously rely upon and undermine conventions of how we relate to photography in everyday life. To begin with, could you explain how you understand photography’s potentiality for expression?

TY: For me, photography involves a process of going to a location and shooting it. However, before starting production on my works, I always do extensive background research on the location and its history, and only once I’ve sorted through all that information do I proceed to the photography itself. It’s impossible to describe in words, but once I’m actually standing there at the location, there is something that I respond to through my entire body, and I feel the best medium for expressing that sensation is photography. Specifically, it’s like something descends before me, or in a single moment what I need to capture unfolds right before my eyes.
At the same time, many of my photographs are emotionally detached, because I try my best to shoot from an objective viewpoint. As such, I think that my works allow different people to each have their own diverse responses and associations. There is no absolute interpretation. Whether a woman or man, or of whatever age and social background, each viewer will have a different way of seeing my work. Because painting is ultimately subjective, I could never produce what I want to express through painting. So considering all the different capabilities of all possible media, I feel that photography is the most appropriate for me.

ART iT: Could you explain more about what kind of role the research plays in your practice, and how you determine the focus of each new series?

TY: I do almost all of my research through books. Of course I also do online research, or I talk with the people who support me on site at the locations I intend to photograph and do interviews with people in the local communities. It all varies from project to project, but certainly I spend a lot of time with books and in libraries. Regarding how I choose the themes to explore, sometimes it’s whatever I happen to be interested in at the time. For example, with the “Japanese House” project I happened to be in Taiwan on a residency, so I began researching local history and digging into things that caught my attention.
I also look for photographs and illustrations in old books. For example, my work Beach – Location of the D-Day Normandy landings, Sword Beach, Normandy, France (2002) references Robert Capa’s photographs from D-Day, of which due to a processing error only 11 frames remain from four the rolls of film that Capa shot. The location is now a summer vacation spot, where scores of people frolic on the beach and luxury liners pass offshore.
Similarly, when I made Path – Path to the cliff where Japanese committed suicide after the American landings, Saipan (2003), I had in my head the image of Léonard Tsugouharu Foujita’s war propaganda painting Saipan-to doho shinsetu o mattousu (Compatriots on Saipan Island Remain Faithful to the End, 1945): a former site of tragedy is now a honeymoon destination. There are also surviving photographs of the Lytton Commission inspecting the site where the Japanese Kwantung Army orchestrated the Manchurian Incident, [which inspired Railway Track – Overlooking the location of where the Japanese Army fabricated a bombing to create a reason to invade Manchuria, Shenyang, China (2007)]. 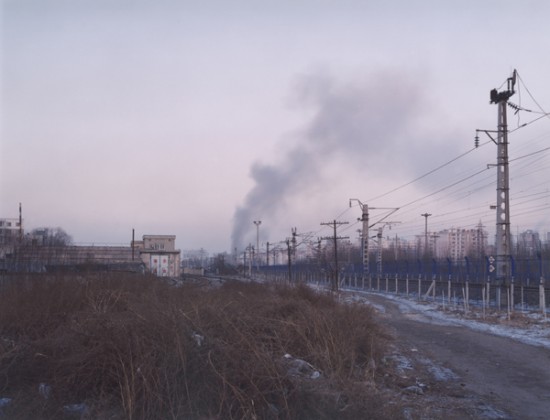 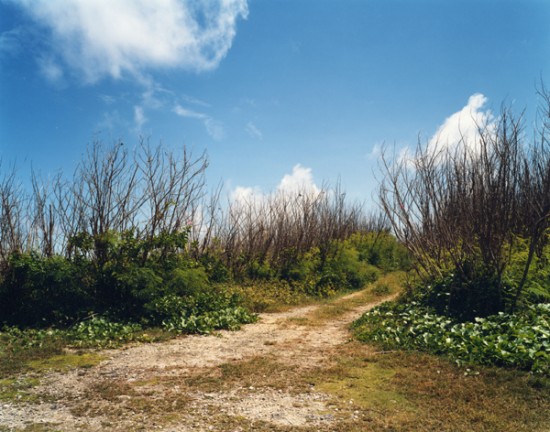 ART iT: But how does all your extensive research end up getting compressed into a single photograph, if at all? And can you expand on what you meant about the sensation you experience when you finally reach the location?

TY: When I take the photograph, something really comes over me. I can’t explain it well, but somehow once I’m standing at the location, the material from the research, and memories from my youth, and things and events that I retain as images, as well as things that I learned through language, and news that I saw in passing on the television or in the newspaper, and advertisements, and all these other things accumulating inside me suddenly come rushing up to the surface, and then there’s a certain point where all of it matches up exactly with the landscape before me.

ART iT: It seems fair to say that the series “Scene” is the body of work for which you are best known, but for example with early projects like “Topographical Analogy,” did you follow a similar process in making them?

TY: With “Topographical Analogy,” more than looking at history, I was interested in the progress of time in a given location, so it did not require the same research that went into “Scene.” I photographed “Topographical Analogy” without knowing the people who lived in the locations I shot, or what their personalities or families were like, so there is an anonymity to the traces they left behind, and a more universal human existence that is recorded in the resulting photographs. This is quite different from the scars left by wars.
Maybe what I deal with in “Scene” is what most interests me. Many of my works are photographed at the sites of conflicts and battles. It’s like how in Eichmann in Jerusalem: A Report on the Banality of Evil (1963) Hannah Arrendt uses the example of Eichmann – who in court looked so ordinary – to illustrate how all people are capable of insanity. We tend to imagine the insanity of war through scenes of mothers crying over their children on the battlefield, or people being shot down with guns, or body parts flying and other such ghastliness, but by not directly representing that, I wanted to remind people that insanity can arise anywhere. Motivated by a strong pacifist sensibility, I wanted to show through my photographs that conflicts are in fact not so extraordinary as we like to think. 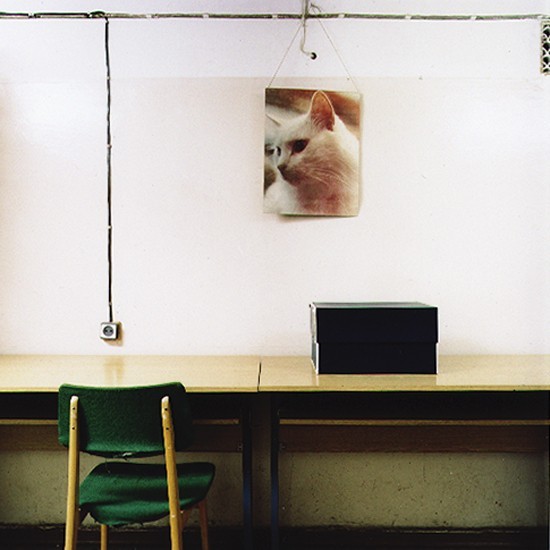 ART iT: At the same time your photographs are somehow released from the burden of expression, because they also employ text as a trigger for transforming the identity of the image or enabling the image to take on multiple identities. For example, in the series “Fragments of the Unimaginable,” you have an image of what appears to be an ordinary cardboard box, sitting on a nondescript table in front of a poster of a cat, but contained within are what is said to be the remains of Adolf Hitler [Fragments of AH (2002)]. Each work stages a series of encounters nested within each other. There is the encounter of seeing the work for the first time, there is the encounter that you as the photographer experienced shooting on site, which the viewer experiences vicariously through the image, and then there is the encounter of reading the caption and suddenly reliving the preceding encounters. In this way even a single photograph represents multiple sites, and provides a lot of material for thinking about the essence of photography in general. How do you understand the relations between image and text in your works?

TY: I actually thought deeply about the relations between text and image for my master’s degree thesis at Royal College of Art in London. At the time I was thinking about how text is an extremely subjective thing, and how a text can influence the reading of an image in a way that is completely different from if the image were presented by itself. I was also interested in the implications of linguistic signification. For example, I was fascinated by Michel Foucault’s description of Rene Magritte’s The Treachery of Images, and how text and images can share this paradoxical relationship. Among some of my experiments from that time, I made a photo of a woman holding a glass filed with white liquid. My idea was that were I to present that image with the text “This is lead,” it would give viewers a completely different impression than if the text read, “This is milk,” and a different image would unfold depending on whichever text. For me, captions are an essential part of the work.