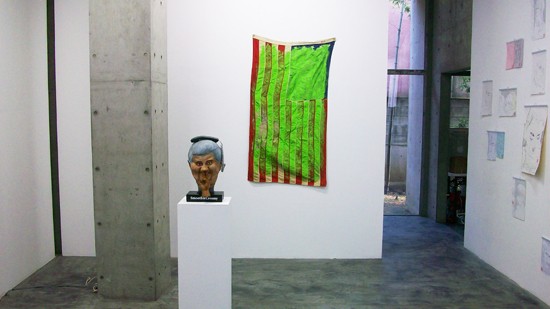 The first in a two-part series of group shows at Misako & Rosen, “Happy Mind – my pleasure” brings together an arresting mix of works by both Japanese and international artists. The exhibition makes dramatic use of the gallery’s unique theater-style plan with its wall-to-wall steps leading down from a broad reception area to a narrow, sunken open space below. Suspended vertically from the central point of focus on the far wall across from the reception area is Stephen G Rhodes’ US flag painted over with the neon green paint used for Hollywood virtual effects backdrops. Titled libyan intervention study (2011), this simple but striking work alludes through its green screen overlay both to the US government’s projection of power into the world arena as well as the way that viewers variously project their own identities, aspirations and anxieties onto national emblems.

If at first somewhat incongruous with the exhibition’s stated premise of looking at “manifestations consequent of both suppression and repression” in contemporary Japanese culture, the flag as alternately absorptive and reflective surface quickly becomes a conceptual axis along which to consider the other works on view. Placed in front of it are two sculptural works by Ken Kagami making use of found objects: one a lifelike, synthetic bust of the American conservative politician Newt Gingrich placed on a pedestal and modified by a telephone receiver resting on its crown and a pair of wooden fingers jammed up its nostrils, and the other a single men’s leather shoe – placed unobtrusively on the floor – that has been split open and garnished with plastic vegetables and cheese slices to resemble a sub sandwich. 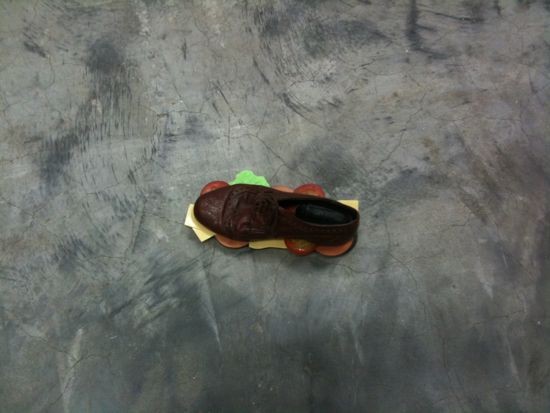 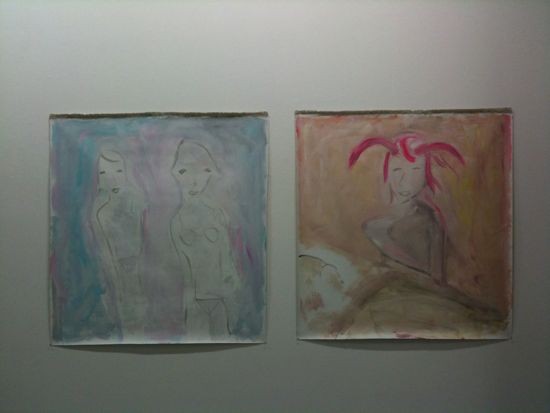 Descending along one side of this arrangement are a pair of Jim Shaw’s small-scale “Dream Drawings” (1992 and 1996, respectively) with grids of finely rendered images that shift storyboard-like from exterior street views to close-ups of faces but never cohere into distinct narratives; a figurative painting by Maya Hewitt of two young girls and a sitting wolf against a black backdrop; and Kaoru Arima’s delicate mixed-media sketches of faces, done on loose paper and pinned to the wall by plastic binder clips.

On the far wall are two paintings by Trevor Shimizu on unstretched linen and a video by Barry Johnston. Made with loosely applied pastel hues that add to their erotic whimsy, Shimizu’s paintings depict a pair of girls and a nurse, respectively. Dated “2025,” they are the result of the artist’s projection of himself into the future, and are executed so as to evoke the faltering hand and diffused libido of an aging artist. Incorporating handheld footage shot at the spontaneous vigil that convened outside the hospital where Michael Jackson’s body was taken the day he died, Johnston’s short video loop is interspersed with fleeting scenes of a lone figure – the artist – singing into a microphone, and is accompanied by a soundtrack of droning singing and metal music.

Collectively, these works make the case for a reprocessed surrealism in which the relations between images and their referents are doubly divorced, obscured or otherwise alienated. It’s not clear, for example, whether Kagami’s bust, entitled Smooth & Creamy (2010), is meant to satirize Newt Gingrich or whether the object was chosen because of the absurdity of its preexisting satirical characteristics. Similarly, the intimacy of Arima’s faces – some of which reappear across multiple sketches – is undermined by a subtle line-play that stretches the figures into odd proportions, as though the pencil was attempting to escape the discipline imposed on it by the mind and body. While it’s never explicit how this specifically relates to contemporary Japanese culture, that hardly matters. Representations not content with their being representations, like Rhodes’ flag these works inherently subject themselves to their viewers.

“Happy Mind – my pleasure” is followed at Misako & Rosen by “Happy Mind – my view,” opening June 10 and continuing through July 17 with works by Masahiko Kuwahara, Naotaka Hiro, Soichiro Murata and Roe Etheridge.