A Restatement: The Art of ‘Ground Zero’ (Part 30)
The Endless International Exhibition: ‘Don’t Follow the Wind’ Update (I) 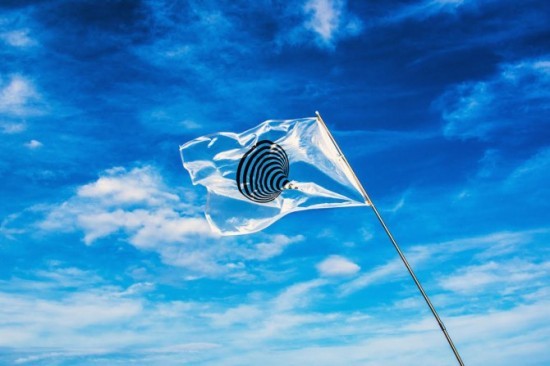 It will soon be two years since the opening (on March 11, 2015) of “Don’t Follow the Wind,” the exhibition “no one can see” currently being held in the difficult-to-return zone in Fukushima prefecture. Radiation levels across the venue are still high due to contamination by radioactive material from TEPCO’s Fukushima Daiichi Nuclear Power Plant, and the difficult-to-return zone remains closed off by barricades with entry strictly controlled. During this time, a number of triennales and other spectacular international art exhibitions and international art festivals have opened and closed around the country. However, this exhibition has only just begun. And at this very moment the exhibits remain on display day and night. As to how long this situation will continue, the reality is that no one knows. The ruling parties’ (Liberal Democratic Party and Komeito) Reconstruction Acceleration Headquarters is proposing the removal of the evacuation orders for sections of the difficult-to-return zone by 2021, which is after the Tokyo Olympics, so there is a possibility that parts of the venue will become accessible in patches. However, it is anyone’s call as to exactly when the entire venue will be open to the public.

Of course, those of us on the executive committee are not simply standing around waiting for the blockade to be lifted to access the artworks left at the venue. Even now we are visiting the venue on an individual basis for the purposes of maintaining and recording the exhibits after gaining consent from the appropriate municipality for temporary public entry, and we continue to liaise with the individuals who made the venues available to us. As well, to give people on the outside who cannot go and see the exhibition for themselves a sense of what it is like, we adapted the inaccessible exhibition into “an exhibition that everyone can see” and have been actively involved in publishing both in Japan and overseas. The most substantial result of this latter effort is Don’t Follow the Wind: Official Catalog 2015 (Kawade Shobo Shinsha), while the former includes the “Don’t Follow the Wind Non-Visitor Center” exhibition held at the Watari Museum of Contemporary Art, Tokyo, in the fall of 2015. In addition, the artists have participated in several international art exhibitions including the 20th Biennale of Sydney (Australia, 2016) and plan to unveil work this year, too, in among other places London and Athens. 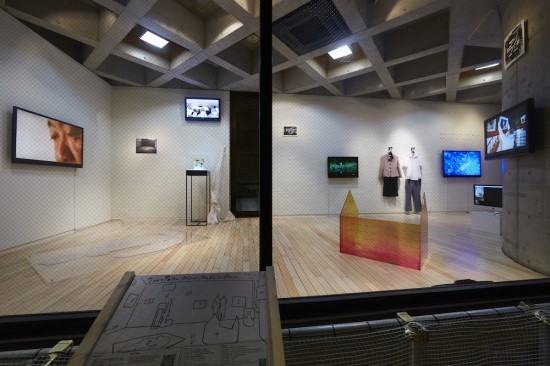 Installation view of “Don’t Follow the Wind Non-Visitor Center” at the Watari Museum of Contemporary Art, Tokyo, where most of the works and reference materials were displayed behind a glass screen. 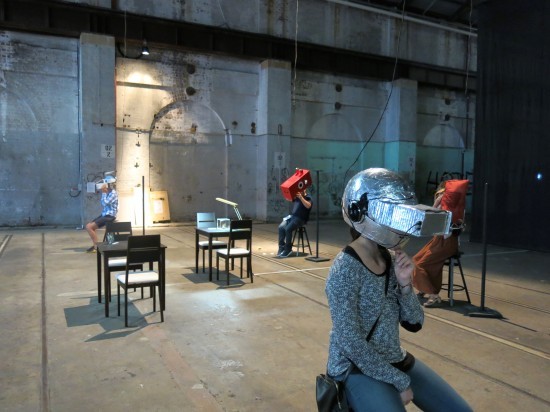 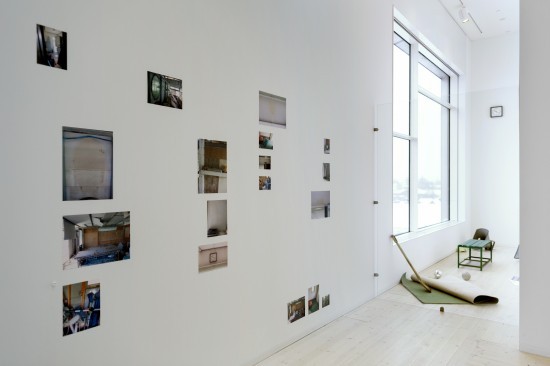 Don’t Follow the Wind – Material Witness (2016-), sundry items found in the difficult-to-return zone of Fukushima, photographs of the items in the state they were found, and the same place after the item was removed. Installation view at “Perpetual Uncertainty / Contemporary Art in the Nuclear Anthropocene” (2016, Bildmuseet, Umea University).

I became a member of the executive committee for this exhibition in the autumn of 2013 after being told about it by Ryuta Ushiro of Chim↑Pom, who initiated the project, and have been directly involved ever since. In addition, as a member of Grand Guignol Mirai, a unit formed in 2014 by myself, Shuji Akagi, Norimizu Ameya and Fuyuki Yamakawa, and therefore a participating artist, I entered the venue and helped install an artwork at a certain location. I did this because I thought that in tackling a project like this that had no precedent, I could not hope for any emergence in the true sense of the word while acting only in accordance with such traditional roles as executive committee member, curator and artist.

Incidentally, the exhibit Grand Guignol Mirai ended up installing in the difficult-to-return zone was a “thing that was formerly a car” titled “Demio Fukushima 501.” The Demio is a private car manufactured by Mazda so we could have called it a car, but there is actually a reason why we called it “formerly a car” instead. By that I mean that by going through the process of temporarily cancelling the registration of this Demio as a vehicle and returning the license plate to the Land Transport Bureau we effectively turned it back into a lump of metal. However, because it is not a normal scrapped car but a temporary scrapped car, even after a certain period of time, if by following the proper procedures it is removed from the venue using a tow truck or other means, decontaminated, put through a fresh vehicle inspection and given a new license number, there remains a possibility that it can be “restored” as a motor vehicle.

In February 2015, the four of us got into the Demio, at that point still a functioning car, and entered the barricaded difficult-to-return zone by showing our passports at a checkpoint despite it not being a foreign country. We drove the car all the way to the venue, arriving just before we ran out of gas, and stopped at the designated location. When I got out of the car I felt as if I had become lost in some unfamiliar time. However, we were only allowed to be in the zone for a limited period. We could not afford to get flustered. We quickly unloaded the items that had great significance for various people from the car and installed them in and around the vehicle. These included the object that was “formerly an artwork” created by the late Seiko Mikami that I wrote about in this column (Number 52). Then we drained the oil and removed the battery and license plate from the car and locked both the doors of the car and the venue, sealing the thing that was formerly a car together with the barricade surrounding the difficult-to-return zone. It goes without saying that in doing this we were conscious of the late Genpei Akasegawa’s Uchu no kanzume (Canned Universe, 1964), the blockading of a gallery as part of the “Great Panorama Exhibition” (1964) by Hi-Red Center, of which Akasegawa was a member, and Marcel Duchamp’s Étant donnés (1946-66).

Since then, however, we have continued to visit the venue, up to several times a year, to check on and record the exhibit and stage a number of performances despite the absence of an audience, getting permission and donning protective clothing on each occasion. I wrote about one of these performances, staged in the summer of 2015 and titled The difficult-to-return zone in a cave, in an essay in Shincho (October 2015). For this performance, Ameya, who was positioned in the darkness of a cave in Okinawa that was the site of a hard-fought battle during World War II, was connected via a telephone line with Yamakawa and myself, clad in protective clothing, who were several hundred kilometers away in an area in Fukushima that was now a difficult-to-return zone, and together we restaged a scene from the play Grand Guignol Mirai. This play dealt with Japan Airlines Flight 123, which crashed on a ridge on Mount Osutaka in 1985, also during the summer. The aim was to link “Okinawa” and “Fukushima” through space-time by way of the partially scrapped Demio, a car manufactured by Mazda in “Hiroshima” (the spelling of the word “Mazda” derives from the highest spirit of worship in Zoroastrianism, Ahura Mazda, who is also said to be the god of “fire,” from internal combustion engines to nuclear reactors). This performance was presented in the form of a “radio drama” as a related event during the above-mentioned exhibition at the Watari Museum of Contemporary Art. In addition, as mentioned in a previous installment of this column (Number 60), shortly before this we presented it as a radio drama (or “radioactive drama” as Shigeyuki Toshima named it) at the Hachinohe City Art Museum. 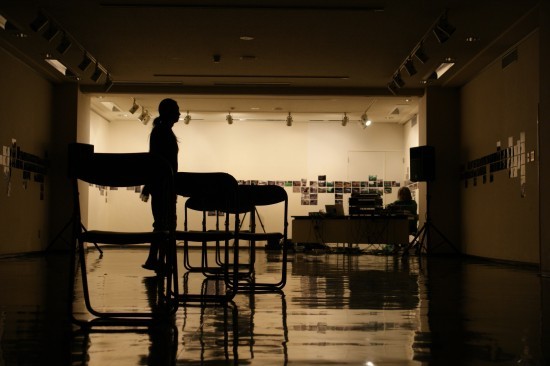 In January this year, accompanied by four members of Chim↑Pom, we again visited the site where our “Demio Fukushima 501” is installed. And again we unlocked and opened the doors to the “thing that was formerly a car” and added to it by placing inside it a number of items, after which, as was the case with our previous visit, we conducted a performance, this time a different one. It involved me standing in front of “Demio Fukushima 501” and reading aloud a poem surrounded by “things that were formerly an artwork by Seiko Minami.” This poem, titled “Kuso no gerira” (Imaginary guerrilla), was written by Kio Kuroda, the poet indentified by the curator Shigeyuki Toshima as the invisible subject of “Tanesashi Decontamination 2016,” a solo exhibition by Grand Guignol Mirai member Shuji Akagi held at the above-mentioned Hachinohe City Museum of Art. Is not this poem, the entire text of which is quoted below, a poem about the difficult-to-return zone?

Days and days of walking
a gun on my back
the road twisting
threading one strange village to another.
Beyond is a village I know well.
And to which I return.
Must return.
Eyes closed
it is there: shape of the forest
a path through fields
roofpeak
how to pickle vegetables
all the relatives
a scrap of farmland to haggle over
petty formalities and whitewashed walls
white always
a broken hoe and other people’s soil
fathers and their fathers cringing into death
mothers driven off….
I return.
On a secret path I remember well
I jump from ambush, rifle poised.
This is the season of revenge
keeping blood fresh in the old old wounds.
The village is beyond.
Here the road knits strangeness to strangeness
and I find nothing I know, as if in a dream,
alone on the road.
I ask the way to a house
and find silence:
walls with no windows
no doors.
Another house
no windows or doors.
No one.
No sound.
Now the road hides in a village the color of…what?
Where am I?
Where does the road go?
Tell me, please.
Answer!
The gun in my hands again I face the silent houses.
But something is wrong…
the weight in my hands is wrong…
wood – a rod of wood three feet long. (1)

But why Kuroda? The reason is there is a commonality linking the crash of Japan Airlines Flight 123 dealt with in Grand Guignol Mirai and the accident at TEPCO’s Fukushima Daiichi Nuclear Power Plant, and that is “accident.” And because, inspired by the “temporary storage depots” for radioactive waste that feature in the countless photos shot by Grand Guignol Mirai member Shuji Akagi, I above all felt it necessary for there to be an “accident of interpretation” in the form of me reading aloud the poem by Kuroda, which was summoned to Hachinohe by Toshima, this time standing in the even vaster and more real “temporary storage depot” that is the “difficult-to-return zone.” With this in mind, I copied the text of the poem by Kuroda that had been handed out at a related event at the time of the exhibition at Hachinohe onto notepaper with a red fountain pen and read from this through my protective mask, after which I placed the notepaper in the car and resealed it.

In addition to this manuscript, I also placed in the car a message that had been given to me by the film director and screenwriter Nobuhiko Obayashi, but I would like to take that matter up in the next installment of this column. (To be continued)