Another “departure” that is striking in the context of this photobook is the use of oblique composition, which applies to just two works: JP01-73 and SPK44134.(1) To repeat, oblique composition is a form of composition that, instead of pushing the entire picture plane to the front, creates an impression of spatial depth or “distance.” In JP01-73 (an aerial shot), this is expressed through the lines of the roads leading to a vanishing point to the top left, outside the picture plane, while in SPK44134 (shot on the ground from Mount Moiwa, Sapporo) it is expressed as an aerial perspective in which the image fades into the whiteness of the snow in the distance at the top of the picture plane. 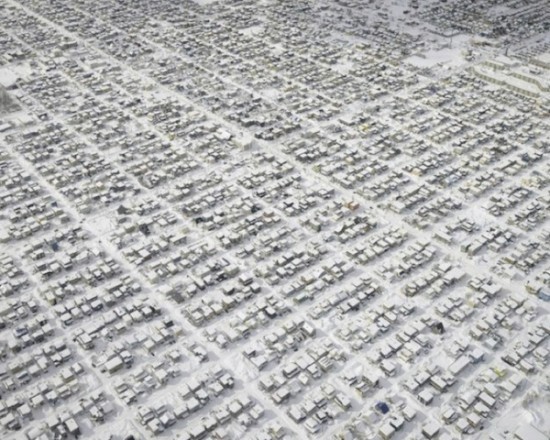 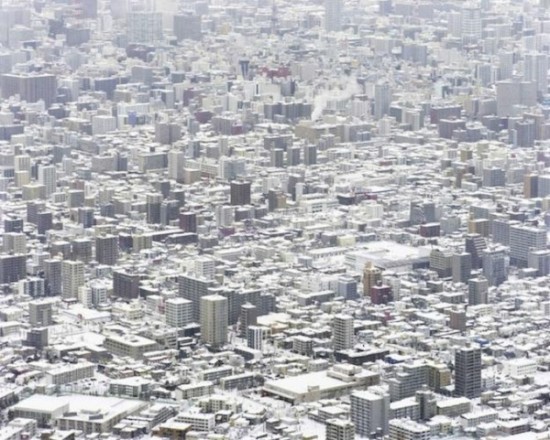 Above: JP01-73, a residential district forming a giant go board grid. Below: SPK44134, the Sapporo cityscape hazy from snow dust. All images: © Taiji Matsue, courtesy the artist and Taro Nasu.

In analog photography, “focus” is all about contours with sharp edges. In order for lines to stand out clearly, bright light and dark shadows are necessary. Accordingly, snowscapes that cause light to be reflected diffusely are a mortal enemy of analog focus. As Taiji Matsue’s digital works have shown, for him “focus” is not a matter of contours, but relies on the density of the number of pixels that make up the image and on the depth of the information within it. Matsue’s strict format cuts off depth and renders the entire image flat, thereby directing the eye to this depth of information, and “focus” has been a necessary requirement of this. This is what is meant by “absolute focus.” The focus position that is not reliant on the naked eye but absolute in terms of the lens is, of course, the focal point, and the moment when all the light focuses into an image at the focal point is the moment when that light comes from an infinite distance. In other words, “absolute focus” is the focus that is achieved automatically based on the principles of the lens when a scene is shot with the focus adjusted to infinity, with the word “absolute” referring to the fact that at this moment it is not premised on humans looking at it.

As was emphasized last time, the photos shot on the ground (the series of photos with the prefix SPK) that are the first in this photobook to strike one as exceptional are in fact the norm as far as Matsue’s photography is concerned, and mostly employ composition that mimics aerial photography by directly facing or looking down on the subject. However, the two photos of almost identical houses, which are clearly not imitations of aerial photographs taken on the ground, but, actually ground photographs taken on the ground can only be described as exceedingly exceptional. 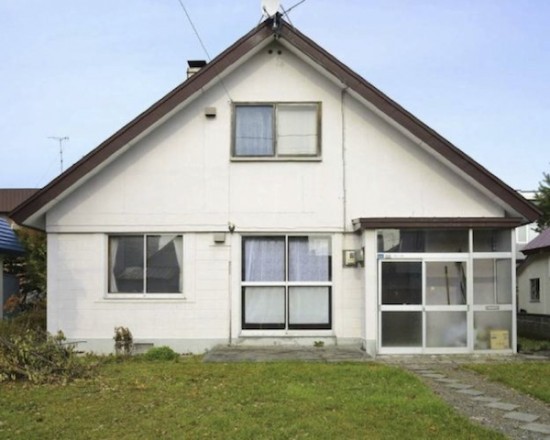 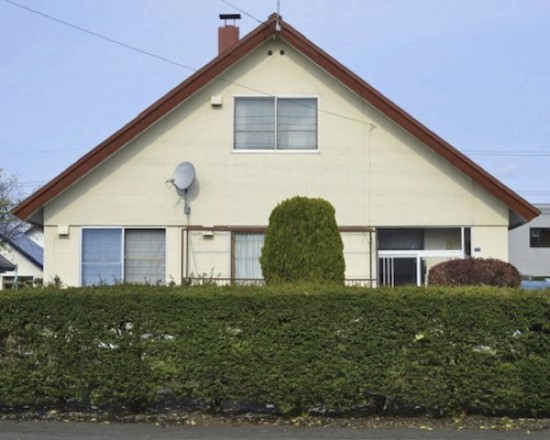 According to a local who is Sapporo born and bred, the houses in question are typical of the style popular in Hokkaido in the late 1960s and early ’70s. In Sapporo, not only graves but also houses from the Showa era remain. The artist was also probably aware of this style. Thinking about the two photos with the exceptional oblique composition and the two with the exceptional terrestrial scenes together, it seems that what is in the “distance” in the snowscapes – what can only be seen with the human eye – is the 1960s and ’70s revealed in present-day Sapporo, or, in other words, memories. Unlike previous photobooks, JP-01 SPK includes glimpses of local, or generational, memories. Photos as graves come back as photos of memories.

Finally, I would like to offer a few comments about Taiji Matsue’s installation at the Sapporo Art Museum, one of the main venues for the Sapporo International Art Festival 2014, “City and Nature.” The two photos that round off the photobook, SPK35243 and SPK44134 (see part one in this series), were placed at either end of the room, forming an axis. On one of the walls between them were arranged a selection of works from the photobook, while on the opposite wall, two video monitors were set up on which scrolled slowly at the same speed, from bottom to top, photos of “cities” and photos of “nature.” 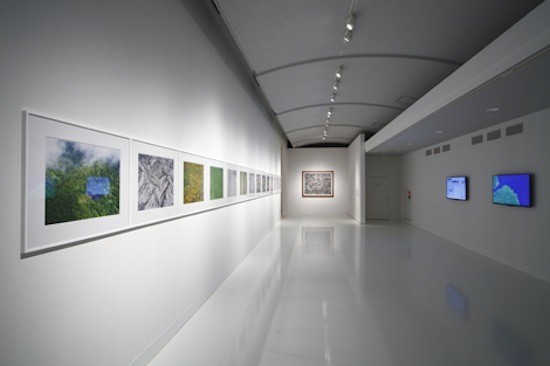 I lingered in the venue for around an hour, observing the reactions of visitors to Matsue’s work, which were actually extremely fascinating. At first they were fascinated by the minute details and the beauty of the colors in the photos, but after a while, once they had recognized particular locations (Mount Moiwa! The Self-Defense Force camp!), each person began to compare the scenes in their own memories and the photos in front of them. This was, of course, the moment the photos as artworks turned into mere photos. I was reminded afresh of how photos all have singularity, how, just as a grave is a grave of someone, a photo cannot help being a photo of a place (of someone, of something).

Because a logical structure is a prerequisite for “oblique composition,” of the 64 photos in the photobook, all the photos from those featuring forests up to the photo of the cemetery that marks the turning point (the photo of graves lined up logically – see part 2 in this series) cannot be “oblique,” while the residential streets in the suburbs curve randomly. The photos of cities that mark the beginning of the series of photos with logical structure are all shot front on, and while SPK44134, which forms a pair with SPK35243 (see part 1 in this series), is naturally among them, it is exceptional in that the “distance,” or “yonder,” is hazy due to snow dust whipped up by the wind. In fact, the aerial photos that come immediately before these two climatic works form a series in which the height gradually increases, causing the vanishing point of the near and far lines that extend towards the center of the picture plane to recede into the “distance.” However, the artist abandons this kind of geographical “distance” and lands on the ground. And in the final photo, memory as non-geographical “distance” is affirmed. This rejection of what has come immediately before, and affirmation of the final photo conveys a certain emotional intensity and sadness.