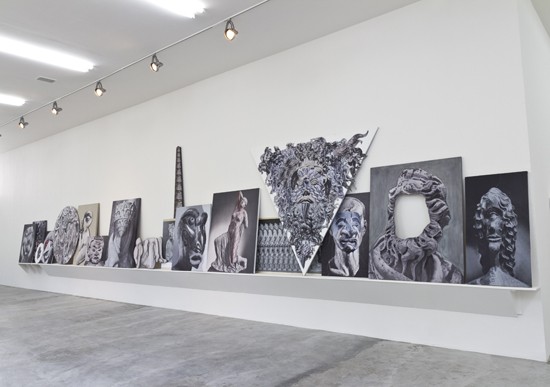 The Mexican gallery LABOR has opened its new space with a solo exhibition by Pedro Reyes (b 1972), a well-known artist from Mexico City, whose works traverse the worlds of art, film, architecture, design, social criticism and pedagogy. Educated as an architect, Reyes often focuses on issues of scale and space, while questioning pressing social issues through the incitement of individual or collective interaction and reflection. And, although only a few of his works are directly located within the practice of building, almost all involve some kind of construction, be they objects, models, interiors or social spaces. Reyes also makes use of strategies developed for communication or education, as well as everyday humor, to engage his audiences. He became known in the early 2000s for his performance and video works, but, since then, his work has also taken on a more sculptural or architectural character, as in the “capulas” (penetrable sculptures) that he created between 2001 and 2009. In one of his best-known works, Shovels from Pistols (2008), Reyes collected 1,527 guns from the public, through an open call, in Culiacán, one of Mexico’s most violent cities. These weapons he then recycled into shovels, so as eventually to plant an equal number of trees in cities around the world. The reader may also remember Baby Marx (2008), among the best-known works that Reyes has exhibited worldwide. A puppet show for television, Baby Marx cheerfully, though effectively, addressed capitalist and socialist economic and cultural systems through the eyes of children, Karl Marx and Adam Smith.

This time, LABOR is presenting Reyes’ Rompecabezas (Puzzles), a series of works where the architecture of narrative structures is combined with anthropological methods of classification. In entering the main room of the new spacious gallery, the viewer encounters three major new works, which are characterized by multiple elements that include different kinds of stories, and possible arrangements and configurations, for us to engage with them, either to construct or to solve them, as we do with puzzles. One of these works, the polyptych Mutantes (Mutants), is composed of 170 plates combining figures from ancient and modern mythologies. Similar to a periodic table, the origins of myths are organized by crossed axes in which animals and objects are combined with humans, male or female, providing what Reyes describes as “a rational framework for the irrational products of human imagination.” “So, what you have is an element in the central row; things like materials or animals,” he says. “Then, the row above is a woman, and above that is what you get if you cross those two things; for instance, a cat and a woman makes ‘cat-woman.’ Below the row of elements is man, and, below that, what you get if you fuse the element with a man; for example, stone plus the man equals ‘The Thing.’ So it works in this way: fish plus woman equals mermaid; bull plus man equals Minotaur, and so on. The fun part is that you end up juxtaposing figures from pop culture with those from ancient myths, and you can notice similarities between religious icons and comic book characters. All these ‘mutants’ reveal something about our desire to extract the qualities from animals or objects and empower ourselves with them.” Of course, the project could go on and on, but, in this case, Reyes has decided to follow those remarks equally attributed to Picasso and da Vinci: “You never finish a work, you only abandon it,” which makes for a strong contrast with the decisions behind Cómo perderle el miedo a la Pintura (How to overcome the fear of painting). 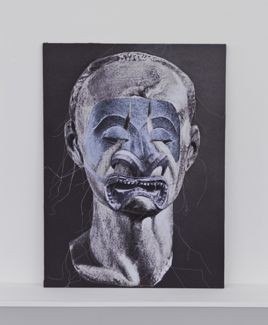 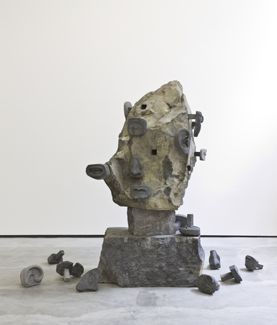 This new work comprises a series of 20 images depicting well-known classical, pre-Columbian and African sculptures taken from the book The Imaginary Museum of World Sculpture by André Malraux. Presented on a long shelf affixed to the gallery walls, each of the 20 pictures has been subjected to a different transformation. To begin with, Reyes approaches these paintings as if they were “flat sculptures,” and, in truth, the statues have lost one of their dimensions, but only to recover their depth in the permutations and reconfigurations of those operations, which render the whole work as a final sculptural cluster. To Reyes, the point is not about using paint; it is about creating an image, whatever medium you choose to use. “For that reason, I like it that Gilbert & George call their works ‘pictures,’ not paintings. A picture is a kind of ‘self contained universe.’ So these are experiments. . .Each statue-image is treated in a different way: scaling, repetition, layering, cutting and re-configuration. They are mostly to do with spatial changes or the manipulation of one of their four dimensions (line, area, volume, time). So, even though they are flat, they are flat images of 3D objects that have been altered or can be altered. Some have time but no volume; others you can interact with, like the Discobolus, and another where the face can be covered or uncovered. One of the pieces has a Rorschach print overlaid, which again is 2D, but the ink blot print is a product of a spatial operation: folding and unfolding paper. . .”

Before we get to the second room, we cannot avoid the major sculptural piece of the exhibition, Pico della Mirandola, which takes its name from the famous Italian Renaissance philosopher who, at the age of 23, proposed to defend 900 theses on religion, philosophy, natural philosophy and magic against newcomers, for which he wrote the celebrated “Oration on the Dignity of Man” (1486), also known as the “Manifesto of the Renaissance.” Reyes mentions that his sculpture-portrait is based on this passage from Pico della Mirandola’s book, in which he articulates the conception of man: “All creatures are brought into the world completed. Except for man, who was left unfinished: You will be able to make out of yourself what you will. If you wish to be like the beasts, you will be a beast; if you wish to be like the angels, you will be like an angel. No specific form or function has been assigned to you.” Following the assertion, Reyes has made several perforations to his volcanic stone sculpture, inviting the viewer to insert in them additional stone carvings of eyes, noses, hair, mouths and other body parts. The sculpture thus becomes a kind of puzzle that continuously changes form, depending on the engagement and interactions of the public. “I chose to use stone for this sculpture, and reference facial parts of sculptures from different styles of statues,” Reyes explains. “So one mouth is pre-Columbian in style, something like you might see used in Aztec statues, while another mouth is closer to something you’d see in European art from the Renaissance, and the same goes for the eyes, nose and ears. It’s very primitive, but the viewer can touch and interact with them, which most stone sculptures don’t allow.” 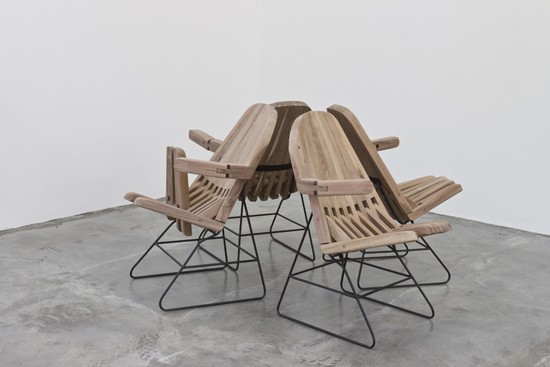 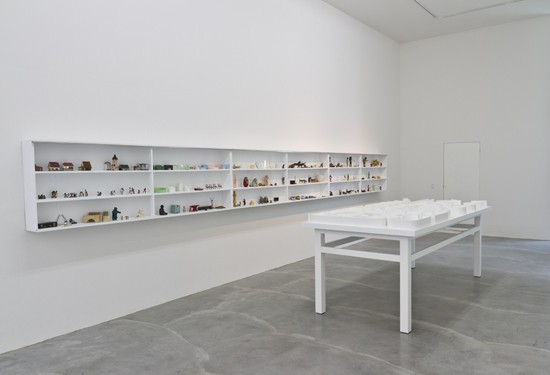 I would not like to ignore the group of mano-sillas (hand-chairs) that Reyes has also placed in this large main room. They seem to be a new development on the intersection of sculpture and design that Reyes has explored in the past. In this case, Reyes appropriated the well-known design of Pedro Friedeberg’s chairs and developed it to make it interactive, and perhaps to be used as a communicative tool. Each set consists of a left and a right hand, with articulated fingers that allow the user to create different gestures or explore non-verbal language configurations and connections.

Design is also used as a narrative device in the Museum Of Hypothetical Lifetimes, which occupies the second room, but, whereas others of Reyes’ works, as we have seen, trigger an activity or some kind of interaction, in this instance, the activity helps to create the work and bring meaning to it. The piece was part of “Sanatorium,” a larger project that Reyes presented at the Guggenheim Museum’s “stillspotting” program in Brooklyn during the summer of 2011, a version of which is now installed at the Kalrsaue park section of dOCUMENTA(13). The Museum of Hypothetical Lifetimes is a scale model, whose floor plan includes galleries and corridors related to different moments in the life of a person. On the wall across the model, large vitrines with shelves display a large collection of small figures that you may relate to the history of your life, to the idea you have of yourself, or to whatever may be your potential or desire. These figures represent a cross-section, as complete as possible, of all inanimate and animate beings that we encounter in the external world as well as in our inner imaginative world: trees, plants, stones, marbles, mosaics, wild and domesticated animals, ordinary women and men engaged in various activities, religious figures from diverse cultures, soldiers, fairytale figures, houses, bridges, ships, vehicles, etc. The participant in this activity can choose from the collection of miniature objects with different meanings, which the participant then places in rooms in the model, organized from birth to death. School, work, relationships, etc, become themed galleries that display the objects selected, creating a museum, at once retrospective and prospective, of the participant’s own existence.

In these works, as throughout his career to date, Pedro Reyes goes back and forth between the search and understanding of the forms that are triggered by his ongoing dialogue with everyday life and culture, and the meanings that are hidden within materials, structures, forms and appearances.