Skip to content
Survey > Things Worth Remembering 2012: ART iT Editors

In 2012 there were numerous large-format international exhibitions organized across the world, from La Triennale in Paris to the 7th Berlin Biennial, the 11th Havana Biennale, Manifesta 9, documenta 13, to the 30th Bienal de São Paulo. In the Asia-Pacific region major events included the 18th Biennale of Sydney, the 9th Gwangju Biennale, the 6th Busan Biennale, the 8th Taipei Biennale, and the 9th Shanghai Biennale, while in Kiev a new international exhibition was inaugurated, Arsenal 2012, and in Japan we had the 5th Echigo-Tsumari Art Triennale. 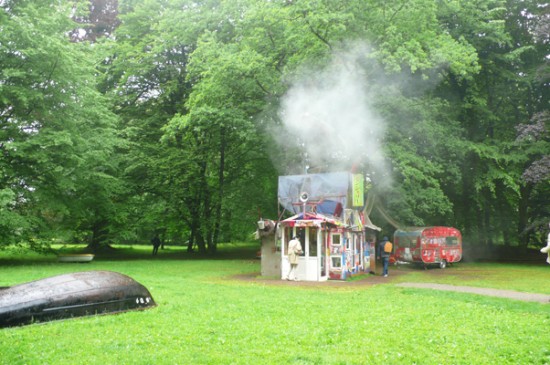 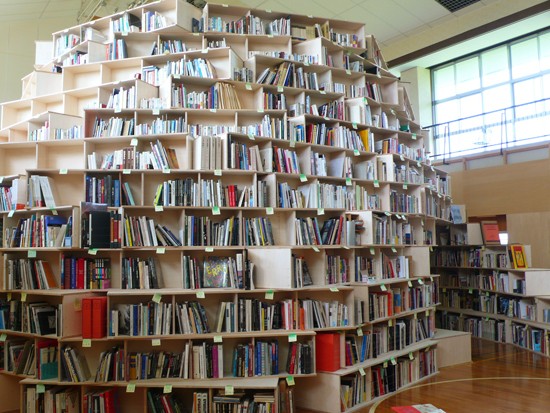 From its inception in 2000, the Echigo-Tsumari Art Triennale has pioneered a new approach to large-scale art festivals that integrates displays and special projects by artists with the collaboration of local communities and the use of ad-hoc infrastructure, with the goal of revitalizing rural areas affected by depopulation and aging. Over time, the Triennale has contributed numerous permanent works of art to the Echigo-Tsumari region, and fostered numerous interpersonal connections between artists, locals, volunteers who work as staff or guides and visitors from across the world.
This year’s fifth edition of the Triennale continued to build on that existing model, starting with the inauguration of a new institution, the Echigo-Tsumari Satoyama Museum of Contemporary Art, Kinare, which hosted the first presentation in Japan of Christian Boltanski’s massive installation No Man’s Land, comprising scores of items of used clothing repeatedly picked up and dropped by a mechanized crane.
But if there was any reason to visit Echigo-Tsumari this year, it was certainly the opportunity to step inside the mind of one of Japan’s most influential critics and curators, Yusuke Nakahara, who died in 2011. In the gymnasium of a former school building high up a mountainside, the artist Tadashi Kawamata created an immersive library structure, evoking the shape of a head, to house Nakahara’s personal library. Perusing the catalogues and monographs of artists and movements ranging from Eva Hesse to Kazimir Malevich and Italian Futurism provided insight not only into the concerns of a unique thinker, but also into a bygone era of cultural flows and critical positions. 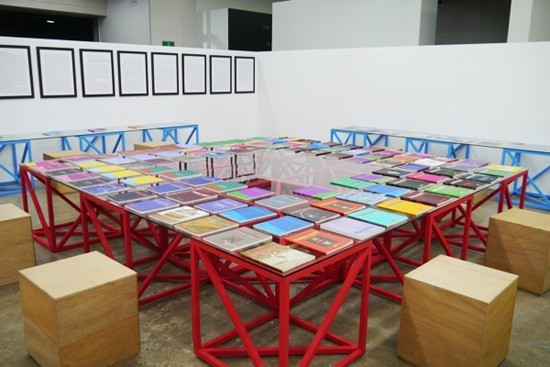 After Massimiliano Gioni’s masterful organization of the 8th Gwangju Biennale, “10,000 Lives,” in 2010, this year’s edition of the Biennale, “Roundtable,” directed by a team of six curators, had an undeniable sense of incoherence. Conceived as a democratic roundtable favoring a loose structure over direct results, the resulting exhibition was plagued by that very same sense of looseness, leaving only a vaguest sense of actual collaboration.
Even appreciating the fact that each curator was in charge with her own thematic section, the most damaging aspect of the Biennale for viewers was that in terms of the installation and curatorial approaches, there was no ultimate consensus. Even though all the members of the curatorial team agreed to the idea of leaving the Biennale Hall as it was from the previous year’s Gwangju Design Biennale, it seems there was still some internal discord, with some curators apparently requesting for adjustments to the space. Whatever the veracity of these rumors, the structure of exhibition space was decidedly chaotic. With the double structure of Hall 2, it was too bright to for some video works, and too dark for others, leading to grumblings among participating artists assigned to the space. Having minimal significance to viewers, the distinction in the work description texts of which curator had selected which artists came across only as a gesture to satisfy the curators’ egos, without offering any deeper understanding of the different sections of the exhibition.
Where there was no consensus in the curation, this also made it difficult to understand the exhibition’s position on contemporary art. From a documentary on Edward Said and Daniel Barenboim’s West-Eastern Divan Orchestra to a slideshow of photographs taken by the Russian philosopher and French expatriate and diplomat Alexandre Kojève, Alexandre Kojève as a Photographer, presented by Boris Groys, the overall contextualization of the Biennale had no firm basis, instead incorporating each curator’s individual judgment, and one can only assume that perhaps there was no discussion at all on the important issue of what the comprehensive perspective of the exhibition should be. 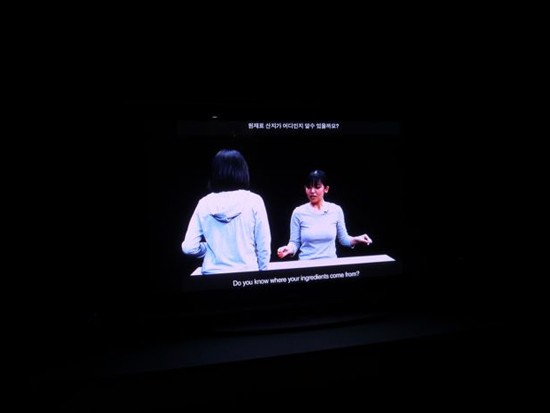 Entitled “Garden of Learning,” this year’s Busan Biennale was organized by Roger Buergel, the artistic director of documenta 12 in 2007. Disheartened by the phenomenon of curators parachuting into international exhibitions without developing any connection to their local contexts, Buergel developed his exhibition over the course of an extended stay in Busan, and through the organization of councils of Busan residents to discuss ways to deepen the Biennale’s connection to its host city. More than a theme, “Garden of Learning” became a method for producing the exhibition, admirably breaking new ground in the conventions of international exhibition making to date.
On the other hand, the exhibition in itself was lacking in visual appeal. Even where works such as Tadasu Takamine’s Japan Syndrome in Yamaguchi Version (2012), Mathias Poledna’s A Village by the Sea (2011) and Andres Serrano’s 70 in 7 (1993) were impressive, neither were these new commissions for the Biennale, while, despite the intents of the artists and underscoring the difficulties of commissioning programs, works produced in Korea inevitably felt a bit too similar – a problem also encountered at documenta 13.
In other words, there was the sense of discrepancy between curatorial intent and practice. In this regard the presentation at the press conference by a high-school-aged member of the local councils addressing the Biennale was most surprising. If such experimentation is sustainable, perhaps there could be a new way for Biennale’s to relate to their local constituents other than through urban regeneration grounded upon cultural tourism. In that sense even though this year’s Biennale was a small and somewhat underwhelming exhibition, it still produced a new possibility for the future. While it was not a definitive success, and somewhat confused for viewers the exhibition concept and structure, the invitation to nine young Korean curators to organize their own small exhibitions as part of the overall Biennale, in a section titled “Out of Garden,” also embraced the long-term perspective of supporting the next generation of curatorial practice. 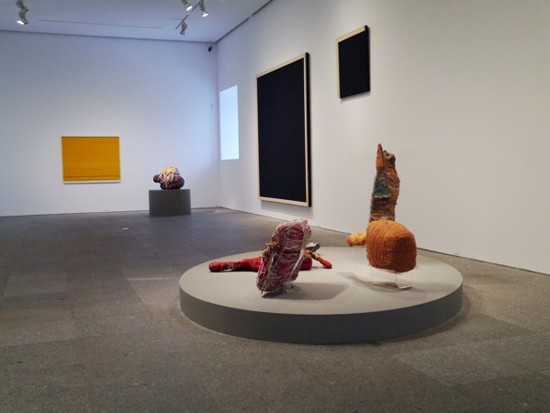 A large-scale survey for the German artist Rosemarie Trockel. As suggested by the title, Trockel went so far as to extend her hand to curation, in collaboration with Lynne Cooke, in order to better reflect her worldview through the works of other artists who have influenced her, as well as objects and ephemera. Yet so effectively was this carried out that it often was impossible to tell what was by Trockel and what not. From zoological studies of flamingos to crab specimens and an old Russian animation about insects, the presentation of materials from the natural sciences alongside works by Trockel underscored the artist’s eccentric and yet uniquely enthusiastic interests, perspective and humor.
In one room there were Trockel’s knit paintings next to knit sculptures by the American artist Judith Scott, who was affected by Down Syndrome and deaf-mute. Scott wrapped everyday objects into cocoon-like works. With these knit sculptures next to Trockel’s minimalist knit paintings, the significance of knitting as an artistic method and of thread as a material came into sharp relief. Although they were not on display, Trockel’s early knit paintings addressed almost masculine themes, in consideration of which one can see the multiple possibilities of a method that is generally considered to be feminine craft.
Where at first glance Trockel’s works traversing numerous materials and methods might appear fetishistic, in being displayed with the works and objects that influenced them, they not only reflect a unique worldview, but also can be intuitively grasped as reflecting an openness to identification with diverse artists and viewers. Even if Trockel’s worldview is not easily understood, it inspires free thinking. Another room with the artist’s self-produced publications consolidated this world of order and consistency (a cosmos) into a single form. Following last year’s retrospective of Alighiero Boetti, this is also notable as the last of a series of wonderful exhibitions that have been organized by Lynne Cooke at the Reina Sofia, from which she is departing.

Yang Fudong: Quote Out of Context 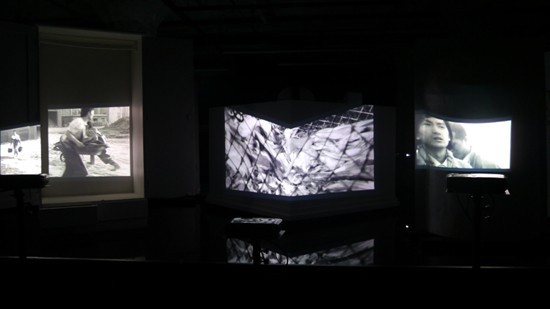 The inaugural exhibition of the Shanghai branch of the Shenzhen-based institution, with video installations on one side of the entrance and photographs on the other. The photographs presented almost all of Yang’s works to date in chronological order, with portrait works in the center of the installation particularly worthy of attention. Shot at the Shanghai Park Hotel (Guoji Fandian), these photographs captured the indescribable malaise of women lounging about the nostalgic, tiled hotel pool, which dates to the 1920s. Suggesting moments clipped out from a film, these works were however not film stills from existing works, and were made as photographs, with the idea of stopped time.
The video installation was spectacular. Almost devoid of narrative, the installation is an experimental exploration of abstract film, with white objects resembling furniture and columns arranged on a large stage, upon which was projected by more than 30 projectors footage from Yang’s previous video works. Needless to say, it was extremely difficult to follow the action in the footage projected upon the objects, with viewers continuously moving around the installation as they attempted to piece together the different fragments. But were the viewers looking at the videos, or at the objects? This installation is fascinating in Yang’s attempt to break down the importance of narrative in his work to date, and promises exciting developments in the future.

A solo exhibition by Jeremy Deller, who has been selected to represent England at the 55th Venice Biennale in 2013. With installations including a recreation of “Open Bedroom” (1988-93), which Deller made in his student days by opening up his room in the home he shared with his parents, and My Failures (2004- ), with documentation of all the artist’s unrealized projects from 2004 to 2012, this exhibition was memorable in its careful delineation of Deller’s evolving practice to date.
As is apparent in his best known work, The Battle of Orgreave (An Injury to One is an Injury to All (2001), the video for which Deller collaborated with locals, including actual participants of the event, to recreate the violent clashes between police and protestors during a miners’ strike in the titular town in 1984, Deller’s works open up new perspectives on past events and incorporate mechanisms of communication between different people. In encouraging participation, Deller’s works revive accounts of the past and take shape through oral recountings, which give them a stronger power than typical “participatory projects.” Not only exhibiting a critical position toward debate, these works also use history to establish a positive outlook on understanding humanity itself. Far from cynical or opportunistic, his referencing of popular culture also addresses the possibilities that can emerge from within communities. The documentary Our Hobby is Depeche Mode (2006, made with Nick Abraham) follows Depeche Mode fan communities from across the world through interviews and footage that convey the symbolic meaning behind everything from costume play with family members to breaking the law in order to listen to the band in countries where listening to Western music is illegal. This positive interest in people is of course expressed in the exhibition title, “Joy in People.”