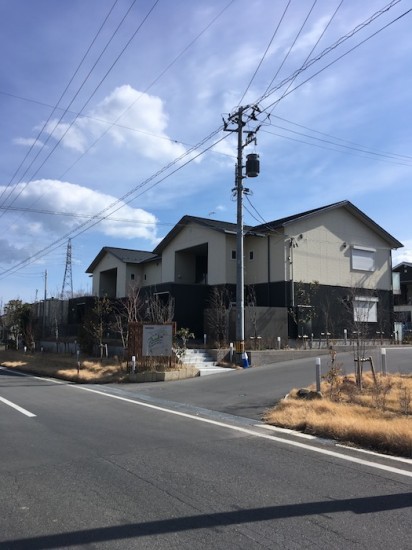 On March 11 this year, exactly seven years after “that day,” “Don’t Follow the Wind,” the “exhibition that no-one can see” that started (though it has yet to open) inside the difficult-to-return zone on March 15, 2015, four years after the Tohoku earthquake and tsunami, marked its third anniversary. And while it is true that it has never opened, the exhibition is “being held” at this very moment, day and night. As well, the exhibition executive committee has set up an official website, published an official catalog, and established “Non-Visitor Centers” around the world for people who are unable to visit the site, including at the Watari Museum of Contemporary Art, Tokyo, in the fall of 2015; at the 20th Biennale of Sydney in 2016; and most recently at Yokohama Triennale 2017. So quite a lot of people have had the opportunity to engage with this project indirectly.

Of course, it goes without saying that these non-visitor centers are not visitor centers. The displays and images people are able to engage with at these locations are not a meticulous guide to the “exhibition that no-one can see.” Access to “Don’t Follow the Wind” is restricted, and even now the locations of the artworks installed inside the difficult-to-return zone, where laws pertaining to such things as radiation exposure and the freedom of residence do not function as laws, are secret. Which is why the displays and images on view at the non-visitor centers are like nameless ghosts, stripped of any information that might enable people to determine where the actual the works are located. Instead they show executive committee members or artists wearing hazmat suits, their faces disguised by masks and goggles, standing silently and motionless alongside the artworks “some place” where time seems to have stood still since that fateful day on March 11. At present, the standard setup at the non-visitor centers involves a simulated experience with video footage presented through headsets providing 360-degree views of the exhibits. 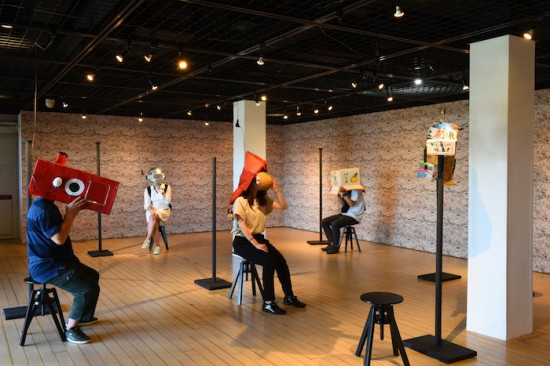 At the same time, however, the situation concerning the difficult-to-return zone is rapidly changing. Accordingly, the most pressing issue concerning “Don’t Follow the Wind,” too, is how to actually respond to the large-scale transformation of the difficult-to-return zone. If a place that no one can go and see is changing while remaining out of bounds to visitors, then the non-visitor centers that indirectly report on it must also change to reflect this situation. Contrary to some initial reports, the aim of this exhibition is not to seal deep underground like a time capsule so that it may endure over time an area that has been turned into a “city of death” due to high levels of radioactive contamination. Neither is it to install artworks in the difficult-to-return zone and simply wait for them to be “unsealed,” regardless of how long this might take. On the contrary, if the difficult-to-return zone changes moment by moment, then the project also must explore effective methods to respond to this and continue making the next move. And so even compared to when the exhibition started, the number of things that need to be done is actually increasing.

On February 20, I entered the difficult-to-return zone for the first time this year. The reason for my visit was to add to, carry out maintenance on and document “Demio Fukushima 501,” the work created by Grand Guignol Mirai, of which I am a member. As some of you know, this work consists of a temporarily decommissioned automobile filled with various items carried by the four members of the group, and remains installed inside the difficult-to-return zone in the hope that one day the public will be able to be view it. Incidentally, though minor, at one time this automobile was involved in a traffic accident resulting in injury, which is why the former owner parted with it and how it came to be reused as an artwork. The car was driven as is into the difficult-to-return zone, where its license plates, gasoline and oil were removed at a suitable location, and then it was temporarily decommissioned by filing the necessary paperwork. Because it has been temporarily decommissioned, if it can be recommissioned by screening it for radioactivity, carrying out the necessary decontamination work, servicing it and subjecting it to an automobile inspection, then there is a chance that it may once again be driven on a public road.

Of course, though beyond comparison in terms of scale, the traffic accident involving this car corresponds to the accident involving TEPCO at the Fukushima Daiichi Nuclear Power Plant, and the temporary decommissioning to the time until the radiation levels fall, the barricades are taken down and people are able to return to the affected area. Until then, this artwork will remain stationary in the same location filled not with the usual occupants but with various objects piled on its seats and in its trunk, waiting to be shown to visitors some time in the future. Included among these objects is some “garbage” in the form of the remains of an artwork by the late Seiko Mikami, which she herself had renounced as such, and “a message that leapt through time” written on film director Nobuhiko Obayashi’s Itsuka mita eigakan (Theater of movies I once saw). (1)

During this latest visit, I deposited in the car a paper cutout (“paper penis”) made on the spot for this very occasion by Kanji Itoi (aka Dadakan) when I visited him at his home in Sendai last year, along with a handwritten message. Dadakan, who personally witnessed the cycles of destruction and reconstruction of the 20th century as exemplified by the Great Kanto earthquake, World War II, the 1964 Tokyo Olympics and Expo ’70, is seeking to “relive” these experiences in the 21st century in the form of the Great East Japan Earthquake, the 2020 Tokyo Olympics (he will turn 100 in 2020), and perhaps even another Expo in Osaka and another war. Such a succession of miraculous recurrences and recoveries seemed to have great significance on the occasion of my first visit to the difficult-to-return zone this year, when, seven years after the Tohoku disaster and with the 2020 Tokyo Olympics just two years away, memories of the disaster were quickly fading.

Perhaps predictably, just as we were heading toward it, we witnessed a major transformation concerning the difficult-to-return zone. This time we had permission to enter the zone as a non-profit activity, but we found the location in the “restricted residence zone” we had been using as a meeting place had been turned into a vacant lot and was almost completely unrecognizable. In contrast, right nearby a company dormitory had been built for people working on the decommissioning of TEPCO’s nuclear power plant, and other facilities including a café-like canteen were also open. During the daytime the canteen is open to the public, and so we went in, looked through the day’s menu, bought meal tickets from a vending machine and ate lunch there, as if it were a school cafeteria. It suddenly occurred to me that I was eating curry udon in the middle of a “restricted residence zone” where an evacuation order was in force due to high levels of radiation, and I was so struck by feelings of disbelief and anxiety that I felt as if I was completely losing my sense of time and place. 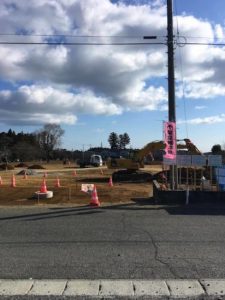 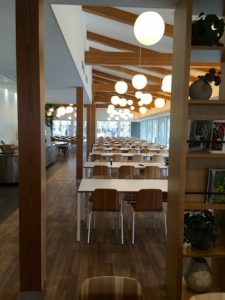 Such changes clearly reflect the fact that the policy concerning the evacuation zone, including the difficult-to-return zone, is already shifting from an initial reconstruction plan to a secondary reconstruction plan. The popular image of the difficult-to-return zone communicated to us via the media is notable for the kinds of stereotypes typical of initial reconstruction plans, as symbolized by such phrases as “a town of death” and “a town where time has stopped.” However, this is not the case across the entirety of the wider difficult-to-return zone. The mounds of flexible container bags filled with contaminated soil reminiscent of ancient burial mounds or pyramids that could once be seen everywhere have been moved elsewhere and their numbers dramatically reduced. The goldenrods and other weeds that ran wild in abandoned fields where rice and other crops once grew have been cut down over a wide area, which at a glance looks little different from a calm and restful rural scene. 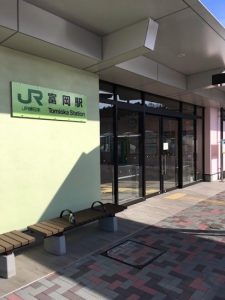 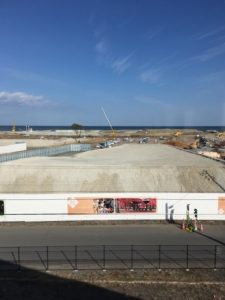 Of course, the construction of the temporary storage depots has only just begun, and the houses and stores around the major stations on the closed section of the Joban Line remain abandoned. In fact, as of now, the scenes shown at the “Don’t Follow the Wind” non-visitor centers are also such scenes. But it doesn’t stop there. We need to immediately ascertain the nature of the secondary reconstruction plan that is rapidly progressing and rework the very direction of our project in response to it. It already appears that we will probably not be able to avoid further waves of change sweeping through the difficult-to-return zone, which ought to have been sealed off, around the time of the 2020 Tokyo Olympics. 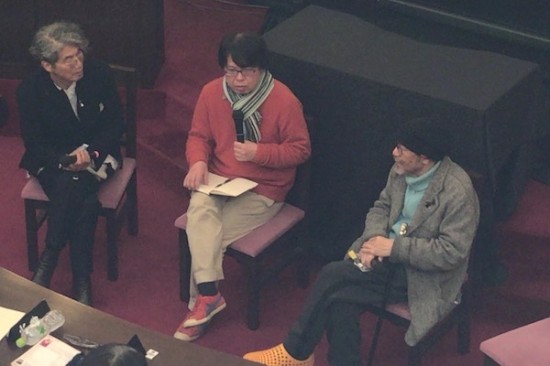 On February 25, the same day I returned from the difficult-to-return zone, at the invitation of film director Nobuhiko Obayashi, I took the rostrum at a symposium titled “What can we do with film?” marking the end of the 2nd Onomichi Film Festival, at which special screenings of films by Obayashi were staged over three days. I had mentioned previously in this column that Obayashi was battling stage 4 cancer, after which Obayashi himself spoke about it publicly, so this fact was widely known. But watching him take part with such great energy in talk shows with various guests after the screenings of his films day after day, I could only be amazed not so much at his astonishing physical strength, but at his astonishing strength of will.

Coming as it did directly after the screening of Obayashi’s rarely seen television drama dealing with Hiroshima, Lover Come Back To Me (1983), the discussion at the symposium naturally turned to Obayashi’s thoughts on film since the Tohoku earthquake and tsunami as someone who has said he will tackle Hiroshima head-on in his next work, as well as to “the message that people will be able to go and see sometime in the future” he provided for Grand Guignol Mirai. Looking back, I wonder just what the audience gathered in the Onomichi Chamber of Commerce Memorial Hall, the film festival venue that still retains the atmosphere of the good old days of Onomichi, felt as they watched Obayashi, who tries to convey messages beyond film across time to a distant future. Then again, for me, that itself is for now the answer to the question Obayashi posed that day: “What can we do with film?” (2)

2. Participating in this informal symposium that brought the film festival to a close as a last-minute volunteer was actor Shinnosuke Mitsushima, who played the role of Ukai in Obayashi’s latest film, Hanagatami. Astonishingly, Mitsushima once served as an assistant director to Sion Sono, also a film director and one of Obayashi’s most ardent supporters. Sono is closely associated with Chim↑Pom, the originators of “Don’t Follow The Wind” itself, and created an installation for the “Non-Visitor Center” exhibition at the Watari Museum of Contemporary Art [for more, see Number 56 in this series, Sion Sono and Hiso hiso boshi (The Whispering Star)].