The now “project (Hiroshima) for Simon sterling – masques” held. A book exhibition is the first private exhibition in Asia introducing activity of the sterling in earnest and, in addition to a masterpiece, introduces a new work about Hiroshima where I was able to go ahead through the production to centering on the Henry Moore work which is a store product of important this museum.

By Miichi Yasuo who produced the mask which played an important role in a new work by a work commentary by the artist who visited Japan on January 22 when became open on 23rd, the following day gave it a lecture. For two days, a state on the day introduces the program that approached in the latest truth to become the nucleus of the exhibition a little this time.

The work of the sterling holds good by enormous researches and practice before it leads to completion. Galleries more than 100 where I meet the valuable opportunity when I can hear the process from an artist and rushed to from the whole country are meetings. I went round the exhibition rooms while hearing the commentary of the artist. 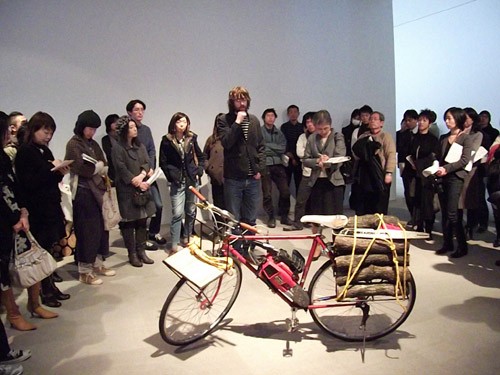 I introduced island (prototypic )》( 2003) or the 《 carbon (2011 Hiroshima )》( ),《 オートザイロパイロサイクロボロス 》( 2006) of the masterpiece 《 weed, and a keyword such as “movement” and “the globalization” appeared from the work which sterling worked on until now. And project (I am connected to “Henry Moore” who is a central theme of Hiroshima )》 and do it.) for new work 《 masques produced for this exhibition 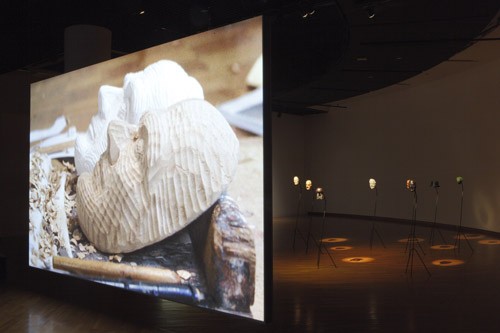 Display scenery: Project (Hiroshima )》 photo:) for 《 masques A new work exhibited to the public first at former Keiichi (CACTUS) this time is the work that it may be said with the collected studies of the study about Henry Moore whom sterling worked on until now. Put a multilayer-like relationship over work 《 atom peace 》( 1964-65) of Moore and him who played an active part as a global artist on top of one another to a program “formal headwear craftsman” of the ability and produce an aspect and constitute it as installation including the pictures which I projected the process on.
As two-facedness of the each cast was introduced to be an aspect, art around Moore and relations of the Cold War and relations with Hiroshima gradually became clear.

Possibility of the lecture original aspect

It is a series of masks which appear for the poster visual that I appear, and play an important role in such a new work. It is ability mask maker resident in Settsu-shi, Osaka, Miichi Yasuo to have produced this mask. I spoke what kind of process a mask was produced by this lecture in by a viewpoint of Miichi. 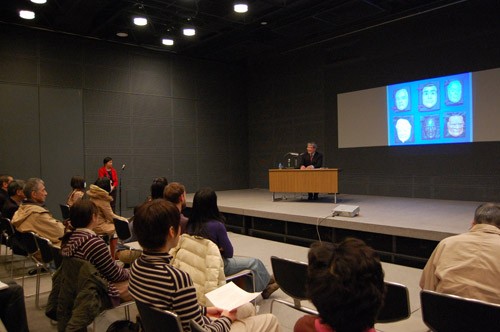 When I produce a mask, it is said that it begins because at first I know the inside of the person. I began by studying a background and thought of the each person, and even this production was to have elaborated molding and a characteristic through sketching and the exchanges of the mock-up next.
It may be said with the work which showed the new possibility of the creation side in contemporary art and world of the No-mask, I recognize each other’s technique, and understanding even the different artist of the field each.