Skip to content
広島市現代美術館(en) > 〈 temporary exhibition 〉 Yasumasa Morimura: Art of the top of the requiem – battlefield to someone 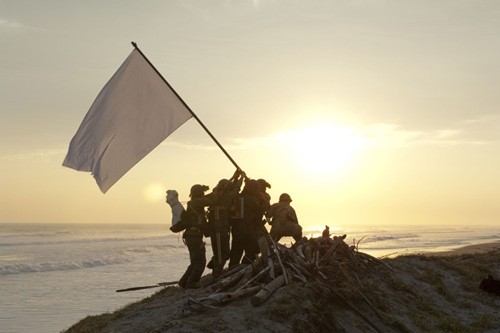 Artist, Yasumasa Morimura assumed own body mediation throughout from the 80s and announced the self-portrait which transformed itself into a different person.
Men – 淺沼稲次郎 (淺沼事件), Oswald (Kennedy assassination case), Yukio Mishima (Mishima case) who colored the times of the turbulence of 60-70 generations dominate charges again at dictator, Guevara, Mao Zedong, 1:00 when I built it by oneself including Lenin, and Morimura faces the talks with the past disguised as the artist who led men and Picasso, Deschamps, Pollock, the world of art in the former century including Warhol ticked away in the history in the 20th century by a book exhibition. Furthermore, focus in 1945 of the World War II end of the war and look back toward the 20th century while adding the interpretation that is modern as a subject with the end of the war commemorative parade of the Times square, a famous news photograph such as the Star-Spangled Banner of Iwo-To and try that I can bring the past history to life in the present age.
Through the news photograph by one modern artist called Yasumasa Morimura, the creative reinterpretation of the portrait photograph, a trial and the book exhibition to look back toward the history / memory in the 20th century on a big scale that it is refer a question to journalism and art, reality and a fiction, a confrontational concept and value standard such as the past and present, and it will be with an opportunity to reflect the past in the present age.