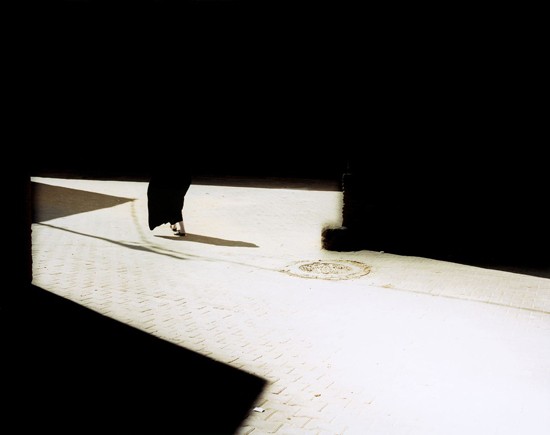 Exploring the technological possibilities of the medium, Maiko Haruki turns photography into a form of conceptual practice. Made with analog instead of digital methods and distinguished by their exaggerated contrast, her works obscure the visibility of her subjects, requiring viewers to appreciate them through careful observation. Filled with an inherent sense of tension, these works inspire admiration for the artist’s painstaking methods of production.

On display in her current exhibition at Taro Nasu are photographs that Haruki has shot over the past two years. In the “Outer Portrait” series, the subjects of Haruki’s photographs are both identifiable and yet partially concealed. For these works, Haruki traveled to tourist spots and then conscientiously removed the particular characteristics of the locations from her compositions. However, the almost accidental retention in the images of details like veils and figures suggestive of Islamic motifs also underscores the idea that these “portraits” take on significance from their settings. Because the details in these predominantly minimal images are extremely specific, they resist any tendency towards universality. The question is whether this is merely arbitrary. It may be because there are so few works on display, but it seems entirely possible that this effect arises unintentionally. Regardless, one has the sense that “Outer Portrait” lacks the broad inquiry into the mechanics of image making that had been apparent in previous series exploring the effacement of the material and physical attributes of photographic subjects.

In contrast, the series “whom? whose?” deals not so much with the characteristics of specific locations as it does with the way that use of contrast and composition can erode any sense of geography from an image. In this series, Haruki superbly transforms her chosen locations into settings without contexts. Framing labyrinthine passages and walls in a way that flattens perspective but still communicates architectural depth, Haruki plays upon the inherent familiarity of the images in capturing the uncanny transition zone that lies at the intersections of public and private space.