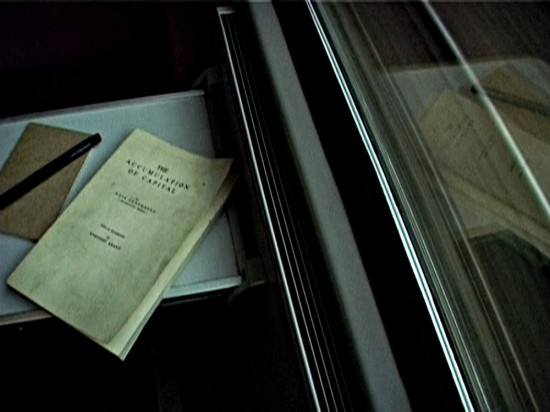 ART iT: There is a strong Marxist element to your thinking. You were part of a Rosa Luxemburg reading group in your early days and have made works drawing from that experience like The Capital of Accumulation (2010), while Marxism has a specific development in India itself. What is your relationship to Marxism today?

SS: I’ve recently begun rereading all three volumes of Capital, as this year is the 150th anniversary of the first volume’s publication. It surprises me how contemporary it is today – perhaps more so than it was 20 years ago. Back then, Marxism seemed dated, while today it doesn’t – and I’m saying this as someone who considered himself to be a Marxist 20 years ago. I am less certain as to whether I am a Marxist today. Previously, I struggled with the idea that Marx’s analysis seemed to be a description of a set of realities that were a bit far away and of the 19th century; today, it actually seems spot on.
We don’t know whether there was really a historical figure called Siddhartha Gautama who became the Buddha. We do know there was a historical figure called Karl Marx. But let us assume that there was such a figure called Siddhartha. What did he say that was so remarkable that it feels like it was said yesterday? Within the context of India, where all the philosophical systems said, “The world is actually somewhere else, this is not real, that is not real,” the Buddha said that when you are sick and your stomach’s hurting, it’s real. There is such a thing as suffering, it is not an illusion. He completely inverted the idea that so many philosophers tried to beguile us with that death, suffering and pain were not real. The Buddha’s single significant contribution to human consciousness is to insist on their reality. Suffering is real, so what do we do? With Marx, and at least the emancipatory bits of the Marxist legacy – there is a lot that is dark and needs to be rejected – the core of that idea is that there is such a thing as the making of value in the world. We all make things and the making of things is what sustains the world as we know it, and it’s through making the world that we come to an understanding of what we can negotiate with each other. Marx is all about understanding how 20 yards of linen can equal one wooden chair. You can summarize Capital in that one sentence. There is an abstraction that mediates the making of things in the world, which is the deployment of human labor power – not human labor, but human labor power. And what one does with that capacity to make things is one of the most important questions of our time.
In fact, there are four points for me that emerged from the most important questions of our time, and perhaps ever. Our bodies are the result of time and express a relationship with many forms of life: that’s Darwin; when we go to sleep there is something that awakens in us and reminds us of other possibilities: that’s Freud; there is suffering in the world: that’s Buddha; things get made and destroyed, and their making and destroying is the glue that provides for the means of exchange, and we can either make this into something that is productive or we can destroy ourselves: that’s Marx. For me, these four things, along with, say, the idea of solidarity that comes from the Islamic tradition, and the idea of grace and redemption from the Judeo-Christian tradition – these six things are in my basket. These are the six or seven things with which we work in life. And then there’s chance, which can make a mess of everything. But I think Marx and Marxism was for me personally a gateway into everything else. When you can think about the making of the world, everything else follows.

ART iT: The pitfall of Marxism is that because it presents itself as a science, it is tempting for its adherents to leave their ethics on auto-pilot.

SS: But that’s true of everything else. The most violent political form of power in world history, the Mongol empire, took Buddhism seriously, partly because it was able to reduce Buddhism to a science of the self. We forget that the Mongols created the institution of the Dalai Lama, who is now known as a cuddly figure of love. What many people don’t know is that Tibetan Lamaism or Buddhism was the central ideology of the greatest military expansionist force in history. It was very useful for the Mongol khanate to have such a highly developed science of psychology for its subjects.
So if Marxism leads to the gulag, Buddhism leads to the Mongol empire. I don’t think they are therefore more or less culpable. It depends on how we deploy our understanding of them. To those who call themselves Marxists, I say that if you do not take into account the historical experience of Stalinism and of Maoism, then you are doing a great injustice to Marxism. It would be irresponsible to consider oneself a Marxist today without having paid attention to what the gulag was. In fact, the only way for me to be a Marxist today ethically is to account for why Marxism led to the gulag. If you don’t do that, and people don’t think it’s real, then it’s just a fad. Just as if you’re a Catholic, then you have to take into account what the Inquisition meant. You have to take into account that antisemitism would not have existed without Catholicism. But I still take Catholics seriously.

ART iT: We still lack a proper accounting of what capitalism has done.

SS: I don’t take capitalism seriously, so I’m not asking capitalists to be ethically responsible. But it’s true, we don’t have a proper accounting.