WITHIN ME LATITUDE WIDENS
By Andrew Maerkle 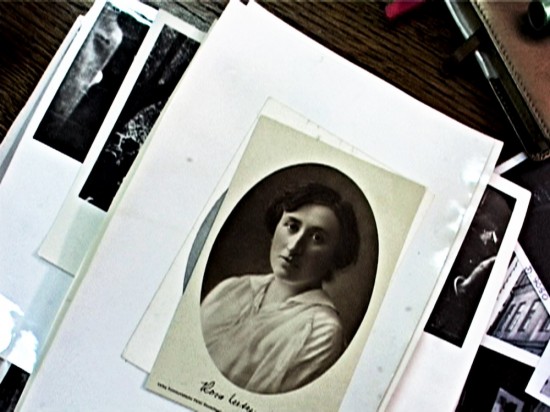 Founded in New Delhi in 1992 by the young filmmakers Jeebesh Bachi, Monica Narula and Shuddhabrata Sengupta, Raqs Media Collective has established itself as one of the most important cultural projects of recent decades. Encompassing art practice, critical writing, curation and educational initiatives such as Sarai, an interdisciplinary research space established in 2000 at the Centre for the Study of Developing Societies, New Delhi, the collective operates on the intersections where the local meets the global, history overtakes the future, and knowledge becomes action. They rose to world recognition after their inclusion in two seminal exhibitions: Documenta 11, curated by Okwui Enwezor in Kassel, Germany, in 2002; and “How Latitudes Become Forms: Art in a Global Age,” the culmination of a multi-year research project overseen by Philippe Vergne at the Walker Art Center, Minneapolis, in 2003. Influenced by Marxist thought, they often use their work in contemporary art as a platform for sly polemics that expose the mythologies structuring contemporary life, whether through individual works such as Escapement (2009), an installation of “world clocks” each pointing to congruences between different emotional extremes, or through curatorial projects such as Manifesta 7 (2008) and the 11th Shanghai Biennial, “Why Not Ask Again?” (2016).

In mid-2017, one of Raqs’s members, Shuddhabrata Sengupta, was invited to teach an intensive course at the Tokyo University of the Art’s Global Art Practice program, where he also presented a public talk on the practice and thought of the collective. Additionally, a new site-specific work investigating the notion of the double image, Utsushimi (2017), using light to reproduce the structure of an abandoned railway shed, was made for the inagural Oku-Noto Triennial, held from September 3 to October 22, 2017. ART iT met with Sengupta during his stay in Japan to discuss the ideas behind Raqs Media Collective. 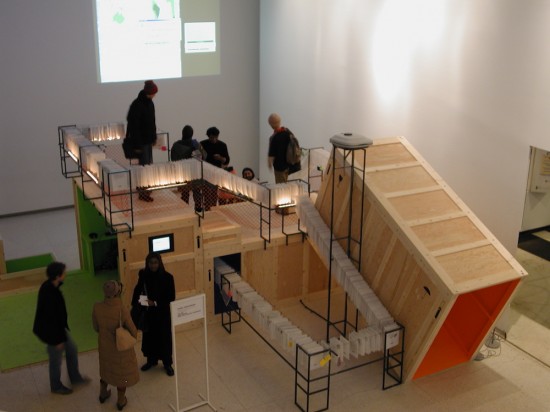 Installation view of TAS (Temporary Autonomous Sarai), with Atelier Bow-Wow, in the exhibition “How Latitudes Become Forms: Art in a Global Age” at the Walker Art Center, Minneapolis, 2003. Portable, multiuse structure made with packing crates for computers, projectors, paper, sound and people.

ART iT: We spoke previously about your participation in “How Latitudes Become Forms: Art in a Global Age,” held at the Walker Art Center in 2003. Although I couldn’t see it in person, I remember reading about the exhibition and feeling that, in tandem with 2002’s documenta 11, it was a breakthrough in how global culture was conceived in the cultural mainstream. I think there was an attempt by the curators to be realistic about globalization and the economic conditions informing art practices at the time, but there was also a progressive outlook too, which could be seen in the title’s referencing of Harald Szeemann’s “When Attitudes Become Form,” and in works like your Temporary Autonomous Sarai (2003), which was produced in collaboration with Atelier Bow-Wow and suggested the idea that knowledge was on the move and being taken to different places to emancipatory effect. It’s interesting to speak to you now, almost 15 years later, and in the first year of Donald Trump’s presidency, at a time when the world has certainly become more global, but not necessarily in the progressive or utopian way anticipated by “Latitudes.” How do you understand the changes between the possibilities that seemed so close to realization then, and how things have turned out in the meantime?

SS: It’s interesting you refer to that moment, because I think both “Latitudes” and documenta 11 were indeed landmarks in the way they addressed the question of what we call the planetary, which is not just a configuration of the international as being an accumulation of different local or national experiences, but the idea that everybody has the right to take their own central position anywhere on the planet. The 21st century displaces assumptions that certain histories or cultural experiences have a greater global presence than others; rather, different peoples, societies and ecosystems have as much to teach the whole world as any other. If we want to think about how to conserve the planet, then the experiences of people in Papua New Guinea are as important as those in the far Arctic regions, as they are in the Rust Belt of the US.
Along with this greater planetary consciousness, there is of course also greater anxiety. Those who captain the ship of contemporary art have expressed anxiety that perhaps this assumption of the global planetary is premature. I’ve heard this even from progressive colleagues who say we neglected what was under our eyes, and therefore also neglected the rise of xenophobic nationalism and so on. I don’t think the answer is a return to parochial sensibilities. I don’t think that’s even a way of addressing local realities. This is the delusion intellectuals have when they do not connect with people on the street. If they connected with people on the street, they would understand that ordinary citizens the world over have a fairly good idea about a new cosmopolitanism – a democratic or I would even say proletarian cosmopolitanism. It is only in the noise of political debate and discussion in the feuilletons and TV studios that there is anxiety about localisms.
So it’s necessary for us to have a balanced view of the world. I come from a country where we are ruled by a form of political power that is exactly like Donald Trump. So do you in Japan. In Turkey, Russia, the US, India, Japan, we are all ruled by these big men who think they speak to local anxieties, but I think this is the last hurrah of nationalism. It will fall. In that sense, “Latitudes” and documenta 11 were pioneers of the cultural sensibility of the time to come. They came at the right moment, but they were early – and that is exactly the right moment.

ART iT: Still, about 80 percent of the participants in documenta 11 were male, with many of the artists based in the US and Europe. Similarly, “Latitudes” felt like a comprehensive exhibition, but in fact it focused on only seven countries. So there are certainly misapprehensions in our projections of the global. With globalization, there has also been a bifurcation between elite and non-elite that plays out in culture as much as in economics, and informs the anti-intellectualism embodied in the current nationalist movements – although it is by no means limited to them.

SS: Of course not, but I think there is something to be said and thought about the phenomenon of elite anti-intellectualism – the willingness to shut down ways of thinking about the world. Global elites have always been mobile – since the 13th century, more or less. Artistic ideas and artworks already circulated between courts and ateliers from Japan to Europe. What is new about our time is that the broad general public also lays claim to a planetary consciousness. This is a new phenomenon. I don’t think we have as yet the intellectual apparatus or vocabulary to think about what it means.
For instance, a certain claim was made when the First International produced itself. Not unlike the case of documenta 11, the participants were all men, all European, from a tiny fraction of the globe. You could say they were unrepresentative of humanity – which is true, and will always be so, because no matter what collection of people you gather, they will always be unrepresentative of the enormous complexity and diversity of the human condition. But just think for a moment about the ambition they had and the scale of their desire to embrace a global condition. That for me is what is important. For instance, a great thinker who came out of the Paris Commune, the geographer Élisée Reclus, thought of urban planning on a planetary scale. And such ambition does not always have to lead to some sort of totalitarian master narrative. We can also think of it as a moment of expansion and imaginative largesse or generosity.

ART iT: The current situation with terrorism in Europe and recruits coming from around the world to join the Islamic State in Iraq and Syria is another response to the planetary consciousness. Youths in England, France, Belgium or Germany who feel utterly disenfranchised in Western society still have a desire to connect with a broader, international movement.

SS: I think Japan prefigures a lot of that. Take the cult Aum Shinrikyo. It was making a claim to global attention. We forget that terrorism has a history in Japan, both from the extreme right and the extreme left. They were always making a claim to the global imagination. The Japanese Red Army tried to implicate itself in global struggles that it imagined and invented for itself, just as the extreme right in Japan reimagines a Japanese imperial imagination. Disenfranchised people do not necessarily constitute the rejects and refusals of society. Sometimes the human bomb used to blow up the truck on the street is one of those people, but the imagination often springs from elites who think of themselves as disenfranchised, whether they are on the extreme left or right. And neither is the terrorism in Europe a new phenomenon. The history of the 19th and 20th centuries is full of attacks like these carried out by other kinds of people. Different paranoias were brought into vogue in the US and continental Europe then. The anxiety about global terrorism goes as far back as Joseph Conrad’s The Secret Agent (1907), which is based on real events of the late 19th century. What is the terrorist in that book trying to do? He’s trying to blow up Greenwich Mean Time, which is the global standardization of time. He is actually attempting to blow up global time. 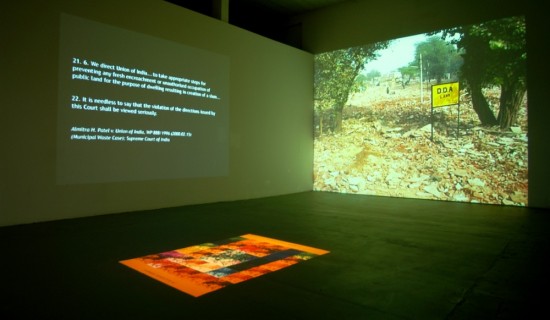 ART iT: Would you say that the post-September 11 surveillance apparatus and the modern security state derailed the utopian or progressive spirit that was evident in documenta 11 and “Latitudes”?

SS: The modern surveillance apparatus and security state were also born out of a terrible anxiety about the reality that all sorts of people are going to all sorts of places. The entire walling-in of policy everywhere from continental Europe to the US to Japan is basically a backlash to the idea that poor people from all over the planet are on the move. Why should a country like Japan, which has an aging population and desperately needs more people, be so anxious about the presence of Syrian refugees? They should welcome refugees as human resources who can contribute to society. There are not millions of Syrians knocking on the doors of Japan. If we remember the end of the Cold War, the rhetoric was all about how the walls must fall, whereas the promise of the Trump presidency is that the walls must rise. So what happened to the idea of the free movement of human beings, which was once seen as the paragon of Western liberal democracy? The rhetoric of wall building is itself symptomatic of the fact that people are moving. The rise of the surveillance apparatus is a symptom of anxiety about something that is not going to change. It won’t stop people from being on the move.