II. Theatre of Consumption
Wong Hoy Cheong on commodifying exploitation and the aesthetics of critique. 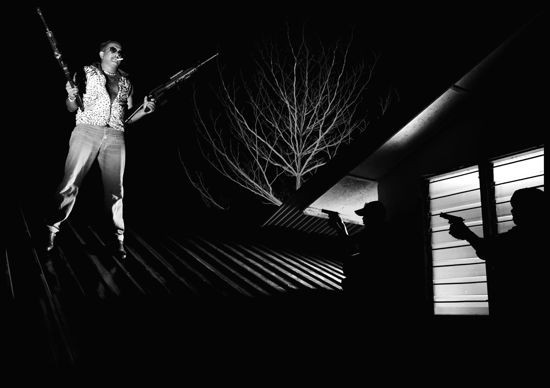 ART iT: We were just discussing your investigation of lost histories and how in your work for the 2004 Liverpool Biennial you mounted cameras on a horse, which anticipates the two-channel video Suburbia: Bukit Beruntung, Subang Jaya (2006) that you made with cameras mounted on a radio-controlled car and a wheel chair. In both cases would you say that rather than seeking to represent the viewpoint of the “other” in a dialectical us-them relationship, you are interested in finding a completely alien viewpoint from the typical agents of history?

WHC: These “alien viewpoints” are vantage points that are not often explored. Merely using “otherness” is perhaps too easy, too simplistic in this complex, global age. In the work for Liverpool, Trigger, it was the horse’s point of view – the hunted turned hunter. Suburbia emerged from my daily drive through a ghost town outside Kuala Lumpur – a failed suburbia. I was doing this year in, year out, and thought that I really had to make a film about the ghost town in contrast to an affluent suburb. I thought what better than to film from the perspective of a remote-control toy car and a wheel chair: one embodies elements of youth, speed and flight, and the other, age, mortality and incapacity.
Both works were about shifting perspectives and horizons to see the world through uncommon vantage points. I had wanted to create dizzying and alienating points of view. But I also wanted to explore what it would be like to have the camera controlled by difficult-to-control agents: horse, toy car and wheel chair. It was also about chance and giving up control. Both were fun projects. I like to play, so many of my projects are about play as process.

ART iT: The work of yours that has left the strongest impression on me is the “Chronicles of Crime” (2006) photo series. Of course I can see the element of play there as well, but overall the project has a noir, macabre feel. Then with your “Maid in Malaysia” (2008) photos, the look becomes quite camp and the works have an advertising sensibility. I have long wondered how you were able to switch from noir to camp so easily, but perhaps this spirit of play that you mention is behind that apparent switch?

WHC: It really depends on the subject matter. In “Maid in Malaysia” the image of maids in superhero costumes is in itself a hilariously cheesy and camp idea. There was no point denying it. So the works were made to look like billboard-size advertisement light-boxes. If I had done the project with a noir feel, the works would have been too dark and righteous. It would have been unequivocally about the exploitation of maids, and not about them being commodified and commodifiable global icons, like super hero characters. For me it only made sense if they were kitsch. People may find it difficult to figure out where I’m coming from because artists tend to have clear and recurrent ideological, thematic or aesthetic vantage points, but I personally think that’s no longer necessary. 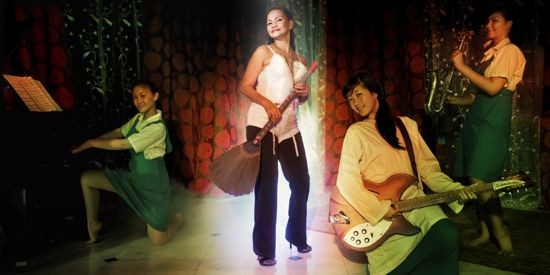 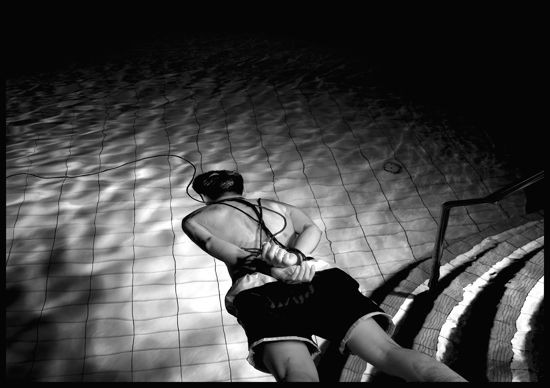 ART iT: What led you to do “Chronicles of Crime”?

WHC: I grew up reading crime novels and watching crime films. I like slasher and zombie movies. Don’t most of us love to watch crime movies or read crime novels, and yet abhor real crime? Why this perverse fantasy, this propensity for voyeurism into crime, murder, dead bodies, torture? I wanted to explore these slippages, these conflicts. Crime films and TV series probably have the highest ratings of any mass media content – like the American TV series “CSI” and “Dexter.” They’ve caught the world’s imagination, and I am a fervent watcher.
I was investigating that aspect of crime in “Chronicles of Crime.” It was my intent to be complicit in glamorizing crime. In one of the photos, The Magnificent Three, I was playing off the title of the classic film, The Magnificent Seven, the Hollywood take on Akira Kurosawa’s Seven Samurai. This photo shows three Malaysian criminals looking glamorous, wearing sunglasses, wielding guns, gazing at the audience – a clichéd image of murderers and criminals that could have been used to promote any Bollywood or Hong Kong or Hollywood gangster movie production.

ART iT: The other thing about grizzly crimes that become legend is that often these crimes originate in unmediated communities, and part of the thrill for broader audiences is simply the mediatization of the underside of society. The flip side is something like American gangsta rap, for example, in which glamorizing crime becomes an outlet for an underclass to voice its discontent with an inequitable social system.

WHC: Yes. In my crime photographs I have the criminals alone, and as the photographer I am, in a way, the voyeur – the audience of these photos as well. Like you say, they become icons. The criminals I took are incredibly iconic and familiar: Robin Hood, witch-doctor, folk-gangster type figures, and in fact after I finished the project two films were released using the same criminal figures I used. One of these was a streetwise, trigger-happy gangster who has become a folk hero because he came from the working class and he would kill petty bourgeoisie traders, as well as the rich, as a form of rebellion. He is now a mythicized icon.
I didn’t want to moralize about it. When we had the discussion in Malaysia after I showed the series I was accused from within the art community of sensationalizing or promoting crime – by activist/cultural workers, with whom I always have a strange relationship. I responded that I’m not writing an academic paper, I’m not here to make moral judgments. I am just drawing from commonly shared sensibilities toward crime and replicating their effects, namely the sensationalization, aestheticization and – ultimately – mythification of criminals.

ART iT: Have you engaged in that willful aestheticization in other projects as well?

WHC: I have. One of my earlier projects is called diPULAUkan/Exile Islands (1998). Basically I replicated former exile islands in Asia, one of which is Sentosa Island off of Singapore, now advertised and sold as an exotic tropical paradise but once used to hold political detainees. In fact, one of the 20th-century’s longest-held political detainees, Chia Thye Poh, was exiled there for 23 years. But I made these islands beautiful. I used plant materials and light and sugar to make topographical models of these islands, floating on seas of crystal sugar colored with indigo, which was an important colonial-era commodity. The idea was to make these islands of political detention and exile look like jewels in the sea.
I am interested in aesthetics because of my painting and academic background. So for the spectators – if you are interested in the aesthetic sheen, that’s fine with me. And if you are interested in what lies beyond the aesthetic sheen, that is even better. My work always has an aesthetic sheen – it’s a personal preference. One of the main things is to draw people to the work, and aesthetics sheens are always seductive. Then once the audience has discovered the sheen, I hope they can find something beyond that as well. Both diPULAUkan/Exile Islands and “Chronicles of Crime” were meant to lure through aesthetics.
Recently I made a film, Doghole (2010), which is like a return to Sook Ching (1990), my first video of 20 years ago. I took one excerpt from an interview I never used because it was so surreal, and made a short film out of it. This film was about the Japanese occupation and an individual’s experience of surviving three months of torture at a concentration camp. However, here again I aestheticized the material. For me it was just too easy to make a gritty, de-saturated war film. I was interested in the beauty of colors, and the ethical and moral issues of what happens when we aestheticize war and torture, when we walk on the thin boundary between beauty and terror. 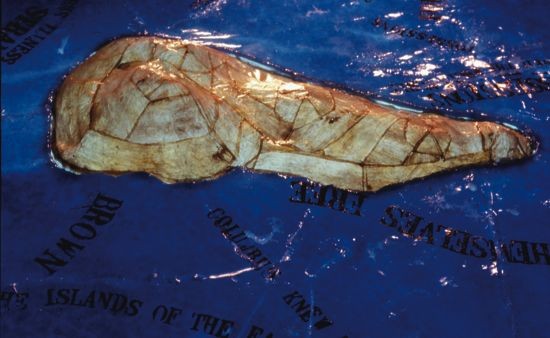 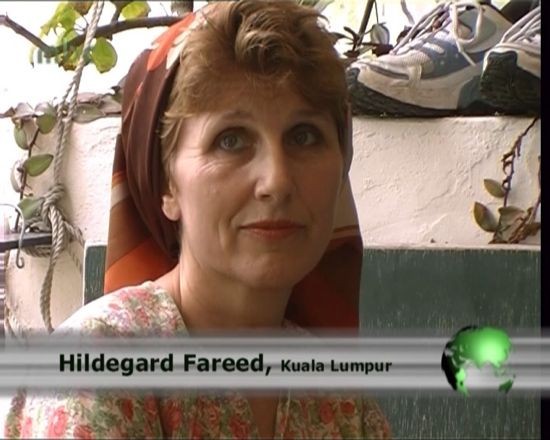 Top: Detail from diPULAUkan/Exile Islands (1998), mixed-media topographical model of the island of Sentosa.Bottom: Still from RE:Looking (2002), mixed-media installation and video.

ART iT: You have also made works that deal more with themes of colonization in general, as in RE:Looking (2004), which imagines a 250-year-long colonial rule of Austria by Malaysia. Do you have to somehow change your perspective when dealing with the immediate trauma of the Japanese occupation versus the durational trauma of the colonial history?

WHC: Yes, I guess the occupation is more personal and visceral, whereas colonial history is more detached and intellectual. My father is a survivor of a Japanese concentration camp – the film Doghole is in fact based on his experience – and I guess that makes my relationship to the occupation more visceral. Yet one of my arguments these days is that we are all complicit. So while overtly different, both works explore this complicity. Malaysians were inextricably involved in the detention and torture of other Malaysians during the Japanese Occupation. In RE:Looking, the former-colonizer and the former-colonies exploit migrant laborers and yet regard them with paranoia and xenophobia.