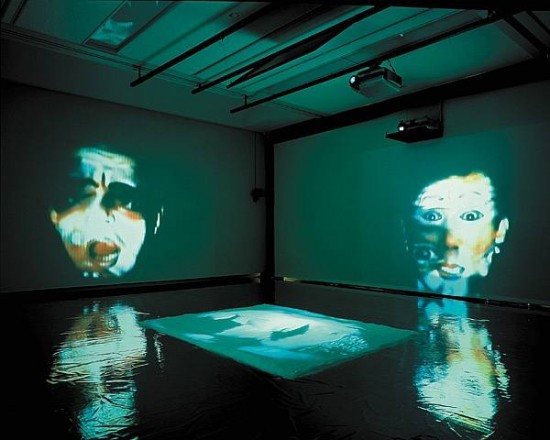 ART iT: Clearly national identity, national myth and utopian nationalism, which are all related but different, have variously figured in your works. For example, you have the piece Unity in Diversity (2003), which connects late 19th-century Indian nationalism to ethnic violence in contemporary India. Where utopian nationalism was inspired in part by a spirit of internationalism, now in the age of globalism it’s a very interesting moment to revisit that point in this whole discourse.

NM: Yes, I think it’s breaking down, which is a good thing. Nationalism had its moment in the bourgeois revolutions that took place in the Western world and in India as well. When India gained its republic in 1947, it was a bourgeois revolution, not a working class revolution.
As touched upon in Unity in Diversity, there was the utopian idea that emerged in India in the 19th century, and which the middle class fought for, that all different religions and cults would live together in harmony. But now we’ve gone beyond that into globalism and the hegemony of the multinational or transnational entrepreneurship. Most of the cars on the road in India are either Korean or Japanese. It’s that level that interests me because that’s what we’re living in.
In central India there is a Maoist revolution taking place. This is a region inhabited mainly by tribal indigenous people, where the land is extremely fertile and forested, and provides the tribes their livelihood, but now multinationals want to dig there for bauxite to make aluminum, like the company Vedanta Resources. But once they start digging, the land becomes barren. There are also areas in south India where a Japanese company is digging for granite. Once you dig, there’s nothing left.
This is where the multinationals are coming in, excavating and taking away for profit. It’s not brought back to the people who live there or are ousted from there. People don’t know that there’s actually a revolution happening, with the tribes coming together to fight the authorities coming in with the companies. And the government of India is hand-in-glove with the companies, because we are going towards liberal capitalism, like in the United States.
On that level, on the micro level, we have to address these problems. I’m an artist and I can only make art, but even doing that, if in some sense a few people understand, then it starts to grow. Every democracy needs work. It is not a given. You have to reach it. There are times when things might veer the other way around, but you have to try to prop it back again. It happens all across the world before you arrive at a steady situation. So parochial ideas need to be challenged. With my audience in India I want to break away from the parochial voice and push it to be more expanded and open.

ART iT: You also frequently draw from literary sources, as in Remembering Toba Tek Singh. Is that part of creating a more expanded voice?

NM: Yes. The author of the original story, “Toba Tek Singh,” is Saadat Hasan Manto, an Indian-Pakistani writer known in both countries. He wrote only short stories to do with the business of Partition, and for example my family are victims of Partition – I was born in Karachi. “Toba Tek Singh” is set in a lunatic asylum in Lahore. When the people in the asylum are told that those who are not Muslim, including Christians and Sikhs, will be moved to India, while those who are Muslim will be moved to Pakistan, everyone is in turmoil. There’s a Muslim man who climbs a tree and says, I don’t want to go anywhere, I want to stay in this tree, because I don’t know anything about this Pakistan, I think it’s a razorblade factory! Manto makes the whole business of cutting the nation in two ridiculous. When nuclear testing took place in 1998, I decided to evoke that story, and its satire.
These are people who are brilliant writers, and I feel I can partake of that. I also use Heiner Mueller, whose work I admire greatly because he’s able to use the classical language of myth as well as graffiti of the street. Medea (1994) was one work based on Mueller’s plays, and Hamletmachine another. I have also used Christa Wolf’s Cassandra, and reference the Bengali writer Mahasweta Devi, who has been working with the tribal communities who are being dispossessed. The “make her” sound in the In Search of Vanished Blood installation comes from her work. 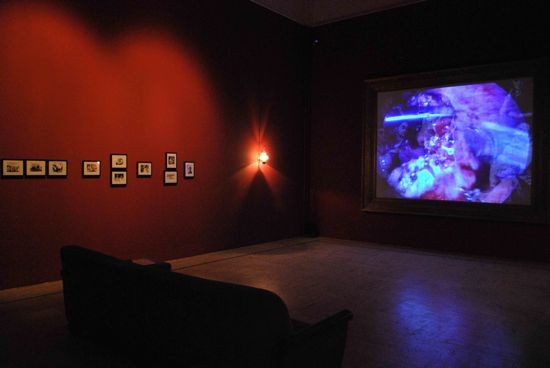 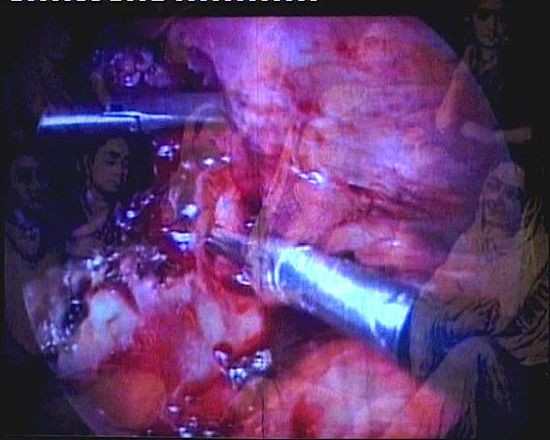 ART iT: You mention the idea of splitting the nation in two, and have made the work Splitting the Other, and then of course there’s “splitting the atom” of nuclear fission. Is this something you intentionally link together?

NM: Splitting the Other has to do with psychological terminology used in theories of projective identification in the works of the post-Freudian analyst Melanie Klein. From her observation of infants, Klein came to the conclusion that a kind of strange, irrational hatred or aggression occurs when you project a part of yourself which is itself aggressive onto another and see it there, not in yourself, and then begin to attack the other. In 2002 in the state of Gujarat in northwestern India, there was an extremely violent attack by fundamental Hindus against minority Muslims. The kind of violation and aggression that occurred was so horrific: men raped pregnant women and then cut the fetuses out. Those images have never left me.
The work was made after that, so in it you see the fetus outside the womb with the umbilical cord, but I join up the brains because when you give birth to a child you also give birth to a brain, to civilization. When a man killed this woman and the fetus, he was actually killing civilization.
That’s why I call it Splitting the Other, because there was a majority community who believed a minority community would somehow come back and attack them. You’re talking about a ratio of 83 percent to 17 percent. The 17 percent Muslims are going to come back and kill all these Hindus? Isn’t this crazy? It’s this little community that was made into a demon by the fundamentalists. And of course it also happened with the Jews in Germany. So it’s a mental phenomenon that needs to be examined.

NM: I don’t like to complete circuits. I think it’s good to leave them open, like questions. I don’t have the answers anyway. I have some ideas but I don’t have all the answers. That’s why it’s all about communication. That’s why in In Search of Vanished Blood I use footage of the person signing American hand language, which is a very efficient system of spelling, unlike in India and Europe where they must use both hands. “Democracy” is being spelled out, and then after that there is the Morse code, which is of course an old way of communicating.
But the voice you hear is a female hysterical voice, because that’s the next thing we need to work on, the hysterical voice. Why is it that the hysterical voice is not listened to? What is the hysterical voice saying? It has been denigrated as an illness. Is it really an illness, and not a cry? That’s my next project, hysteria.

ART iT: As shown in the video, the hand gestures of the sign language also mimic the iconography of different religious representations, like the mudras of Hinduism and Buddhism or even Christian depictions of Jesus with his hands held up in a gesture of blessing. When something is disconnected from its context, there are all these different ways it can absorb another meaning.

NM: That’s also interesting. As much as I can talk about the work, I’d like others to talk about it too, because then we can make a triangular relationship, which is actually how an artwork is completed: the viewer, the artwork and me.