In his previous column, Noi Sawaragi introduced concerns about the differences between art and theatre, presence and absence in relation to Norimizu Ameya’s The shape of me, simultaneously presented at multiple locations in the Sugamo area of Tokyo as part of Festival/Tokyo 10. 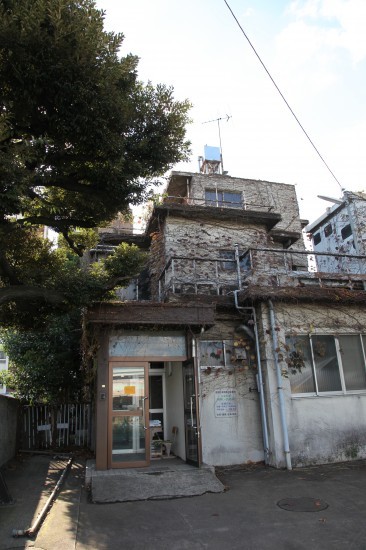 Exterior view of “After-Hours Clinic” from The shape of me (2010).
All images: © Yohta Kataoka, courtesy Festival/Tokyo 10.

Many of the people reading this will have seen The shape of me. And more than a few of these people will undoubtedly have felt they didn’t quite understand what it was about, while also being left with a mental impression that remains deeply entrenched long after they viewed the installation. Although the time it took each visitor would have differed, having registered at the Nishi-Sugamo Arts Factory and completed the walk from “The Opening Hole” dug in an old school grounds to the final station, “After-Hours Clinic,” they would have wandered out onto the street seeing the world in a different light. I’m sure this was the case for more than a few visitors. And as time passed, I’m equally sure these people would have regained their original outlook on the world. That feeling upon leaving “After-Hours Clinic” of inapproachability, of having lost all hope of return, has no doubt faded. One seemed to have been so moved at the time, yet now it is completely forgotten. But actually, to have forgotten is healthy. If the after-effects had continued uninterrupted, people would have been unable to live as they had before. But have we really returned to the world we inhabited before we set eyes on that “Opening Hole”? As a clue to understanding the main issue, let me start by addressing this question. 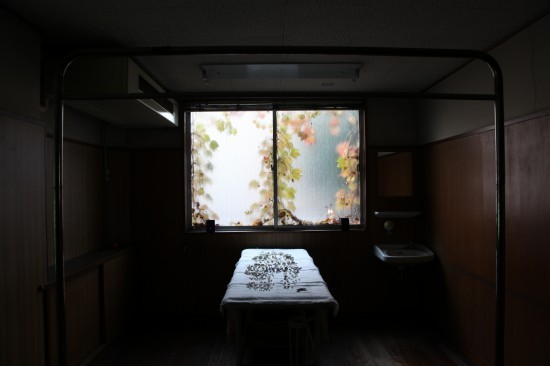 Just why is it that, after viewing The shape of me, the world no longer appeared as it did before? Try to recall what you felt when you viewed it. Certainly, the three houses we wandered around with nothing but tiny maps to guide us were far from “normal.” The first, “Inherited House,” was a “town residence” where a woman kept as a mistress lived by herself even as she grew old. The second, larger house, “Half a Church,” was, as the name suggests, once connected to an adjacent church and later used as a women’s dormitory by a certain religious group. The third, smaller building was once a highly public space, a local after-hours clinic accepting a wide range of patients. Each building was radically altered by Ameya and his assistants to the point where its appearance was changed completely. The extent of these metamorphoses was made clear during the “vestiges exhibition” that was mounted for just one day after the end of the festival, during which it was possible to view the rented properties restored to their original conditions. In this instance, however, the extent of the changes was of no great importance. This is because the work that had gone into each of the abandoned houses did not constitute the “expression” in the first place. At the least, these were not “artworks” of the kind where the artist reuses existing facilities. As I wrote previously, it appears that in each case the embellishments were designed to bring to the surface the “presence” of the people living in the houses before they were vacated. Of course, Ameya does not know these people directly, which perhaps explains the reason why. Instead, using “things” left behind by the people he ought to know best but who are no longer present, he creates concrete destinations for viewers to focus their attention when they rehabilitate the presence of such others. So, what is it that happened as a result? 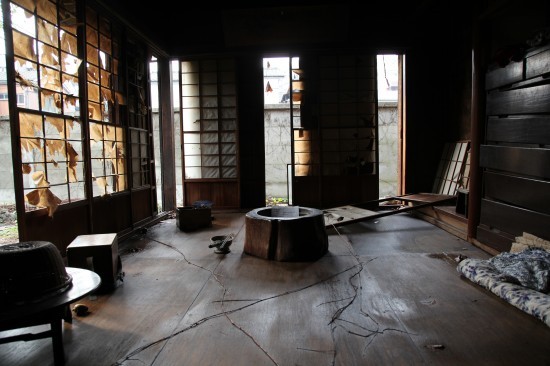 Imagine, for example, if for some reason the house in which you are living right now, or the room in which you are reading this, became uninhabitable, and you and your family had to move out. What would happen to that house? Perhaps someone would take a liking to it immediately and rent it. But in order for this kind of property circulation to be possible, any evidence of the previous inhabitants has to be carefully removed. The walls need to be painted white, the flooring replaced, the used curtains removed. Everything throughout the entire house has to be renewed. Otherwise it would be difficult to find a tenant. This is not because a grisly incident has occurred. That evidence or traces of someone having lived there remain is enough in itself to make people recall “things best not recalled once left behind.”

What are these “things best not recalled once left behind”? Only the individuals concerned know. All we can say is that they are unique to each individual. What is clear is that within the “house” that languishes at the bottom of each individual’s heart (a former residence, or the former state of one’s current residence) there is undoubtedly an “incident” of some kind. The shape of me reminds visitors, whether they like it or not, that “this house is vacant not because no one is living in it now, but because someone previously lived in it.” We also come to understand that “no house comes in a purely vacant condition, and along with any house in which someone once lived we also inherit signs or traces of that occupancy.” The rehanging of wallpaper and replacement of floorboards are no more than courtesies designed to help us forget this. 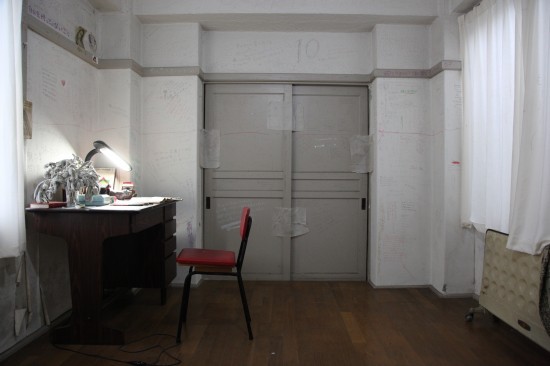 However, contrary to appearances, Ameya removes entirely these “courtesies” on the part of real estate agents. To put it another way, instead of carrying out “renewals” such as replacements or repapering, he rearranges things at the houses in order to expose the truth that the houses have been handed down as well as what remains of the presence of the former occupants. In this sense, there is nothing mystical about “the shape of you.” In fact, it would be more understandable if a ghost or something really did appear. Instead, we have to face up to the difficult-to-handle truth that “we have to live somewhere sometime.” At the same time, we also have to face up to the inevitable fate of “moving house some day.” To put it another way, the house you are living in now will one day turn into something like The shape of me. That is, on the basis that they have gone through this process, those houses we saw in The shape of me can also be said to be “the shape of you.” One day, when your house does eventually become vacant, it will likely be occupied by someone looking for their next abode. That someone will have no knowledge of your having once lived there. And this is as it should be. If such graphic details were to become known, it would be difficult to imagine real estate becoming “property.” However, all real estate has the potential to become difficult to circulate in this way. The shape of me could be described as a kind of discourteous intervention designed to bring into the open these troublesome characteristics that inevitably haunt that which we call real estate.

It is not because these places are haunted that people do not approach them. Knowing that someone once lived in them is far more likely to cause people to avoid these houses. In this sense, ghosts are not dead people or people whose whereabouts are unknown, but none other than “you.” It is “the shape of you” that is in fact the “earth spirit,” the “possessing spirit” that has attached itself to the house.

In this sense, even if, after leaving the final house, “After-Hours Clinic,” all the houses and buildings lining the streets take on the appearance of the “abandoned houses” in The shape of me, there is nothing unusual about this. This is because all of them are in fact waiting their turn to become abandoned houses. And it is you who are the current guardian of these houses.

Norimizu Ameya‘s The shape of me was simultaneously presented at multiple locations in the Sugamo area of Tokyo from October 30 to November 28, 2010, as part of Festival/Tokyo 10.