‘The beauty of distance: songs of survival in a precarious age’
May 12 to August 1, 2010
Multiple Venues, Sydney 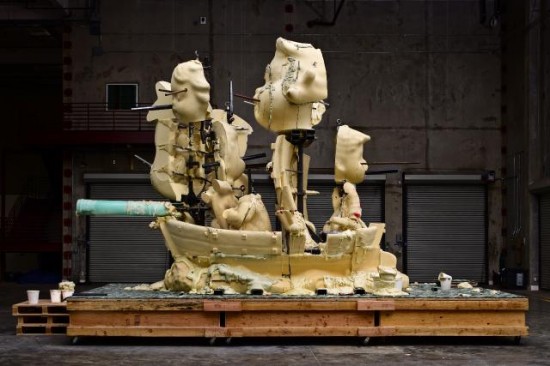 With 440 works by 166 artists, the 2010 Biennale of Sydney is the largest yet in the event’s 37-year history. Addressing the theme “The beauty of distance: songs of survival in a precarious age,” the exhibition is artistic director David Elliott’s third take on a broad assessment of the current conditions of art after 1998’s “Wounds: between democracy and redemption in contemporary art” at Moderna Museet, Stockholm, and 2003’s “Happiness: a survival guide for art and life” at the Mori Art Museum, Tokyo. Elliott’s exhibition sprawls through the Museum of Contemporary Art (MCA), across Cockatoo Island in Sydney Harbour and through to smaller manifestations at venues including Pier 2/3, Sydney Opera House, Artspace, the Art Gallery of New South Wales and the Botanical Gardens. It is an elastic and contradictory show, loosely structured yet fiercely focused at its heart, encompassing the humble as well as the bombastic, the magical as much as the mundane, the didactic and the transcendent.

The confusion in this Biennale comes mostly from the installations of works at the MCA and Cockatoo Island. The first is crowded, often with salon hangs that detract from the paintings and sculptural works on display, while the latter requires an Ariadne’s thread to lead visitors through the labyrinth. The island in itself is compelling but as was also the case with Carolyn Christov-Bakargiev’s 2008 Biennale, it constitutes a complex and haphazard series of unconventional sites that demands careful consideration in order to be used as an art venue. In comparison, Pier 2/3 is perhaps the most successful of this year’s venues in establishing relationships between the three works placed there, and takes on additional value as a metaphoric point of embarkation to the world of the imagination and artistic endeavor.

Paul McCarthy’s Ship of Fools, Ship Adrift 2 (2010) occupies the larger part of the pier. Made of viscous urethane foam, the ship faces inland, not seaward. Evoking a grotesque interpretation of America’s Mount Rushmore, the “sails” are made of childlike doll faces. Far from heroic, this work suggests an indictment of the messes made by humanity, and the often misplaced efforts of the creative enterprise. For McCarthy, it seems, we are all fools hurtling heedlessly, and needlessly, toward an end of our own making. The second work is more optimistic. Danica Dakić’s video installation Isola Bella (2007/08) provides an intimate look at the inhabitants of a home for young people near Sarajevo, employing the device of a constructed theatrical space that draws out the rich imaginations of the work’s subjects. The third artist at the pier, Newell Harry, exhibits in collaborative weavings and neon signs the linguistic misunderstandings to be found in those cultures in which he was raised and with which he has worked. In these text pieces, anagrams such as “the natives are restless / nerv[e]less rats hesitate” reflect back – sardonically – an essential truth that all truth is relative. 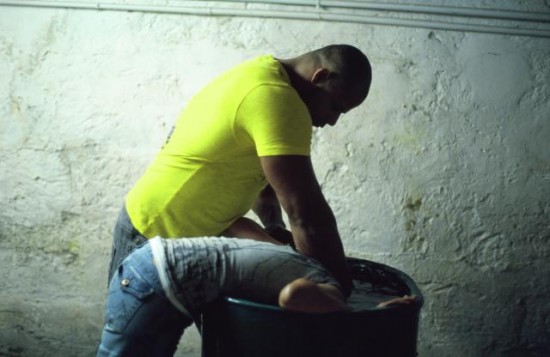 On Cockatoo Island the spectacular (Cai Guo-Qiang’s installation incorporating cars with LED sparklers) resides near a sublimely meditative video by Daniel Crooks of digitally manipulated footage of an elderly man performing tai chi in a Shanghai park. Further along, in the island’s old Powerhouse, Hiroshi Sugimoto’s oddly clinical Faraday Cage (2010) is accompanied by the hiss and crackle of electrical emissions. The installation incorporates a broad steel staircase that rises through the abandoned powerhouse, and which is flanked on each side with light boxes showing the results of the artist’s photographic experiments with static electricity. In these works, the impact of the discharge manifests as highly detailed black markings of intricate design on a glowing milky ground, while at the very top of the stairs hangs a photograph with a thick, potent white slash across the black of the exposed photo paper. Placed in front of this on a battered timber stand is a carved, antique figurine of the Japanese god of thunder and lightning, Raijin.

Outside, from the largely abandoned cranes dotting this island – which was once alive with shipbuilding, naval activities and before that penitentiary inmates – hang black flags with circular holes cut out from their fabric. Due to their innate “emptiness,” the flags cannot function as typical signaling devices. Designed by Gardar Eide Einarsson, they comment on the uses and abuses of nationalism and revolution. Also addressing the savagery of life, Yang Fudong’s video installation East of Que Village (2007) is a bleak look at the violent choreography of survival that plays out among humans and wild dogs against a stark, arid landscape. Located in another part of the island in a narrow suffocating room, but no less potent, Regina José Galindo’s video Confesión (2007) features the artist undergoing a modified form of water-boarding torture. 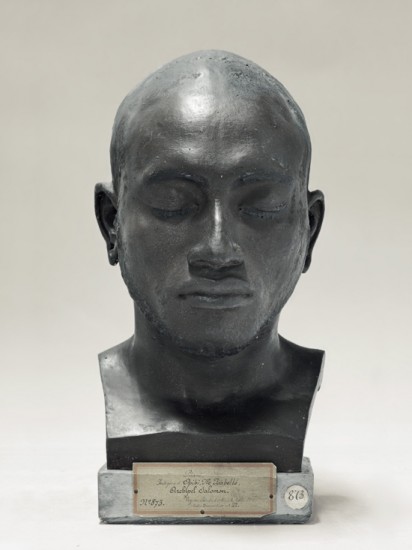 The MCA installation underscores the intellectual underpinnings from which Elliott freely draws for his exhibition concept, namely the Western idea of the Enlightenment and its successes and failures. Despite a jumbled installation, some works here come off favorably. Fiona Pardington’s room of large, framed photographic portraits, Ahua: A Beautiful Hesitation (2010), features images of life masks of New Zealand Māori and Polynesian subjects that were cast in the 1840s. As a photographer Pardington displays an exceptional ability to balance the tensions between the animate and inanimate, longing and loss that are inherent to the medium. This series is no exception and presents the magnificence of her subjects in a transcendent fashion.

Also notable is the extensive inclusion of artists from the First Peoples of Australia, New Zealand and North America. The image of the shaman, trickster or sacred clown recurrent in their works serves as an important counterweight to the Western notion of Enlightenment. At Superdeluxe@Artspace, home for many of the Biennale’s live programs, Skeena Reece delivered the riveting presentation Raven: On the Colonial Fleet (2010), a high-energy performance that ensured that no one who saw it will ever think about or see North American First Peoples the same way again. Reece’s attire was a remarkable collision of Native American, punk, S/M, Goth and terrorist symbols. Her imposing presence for the first third of the performance was accompanied by video projections and ear-splitting thrash and techno music that segued into rap (Reece is also a singer) and then into an homage to Marlon Brando for his intervention against the misrepresentation of Native American peoples in Hollywood at the 1973 Academy Awards. As Reece writes in the Biennale catalogue: “It is not my intention to win over audiences, but to watch them slowly realize that I am indeed fucking with them.” [p119] 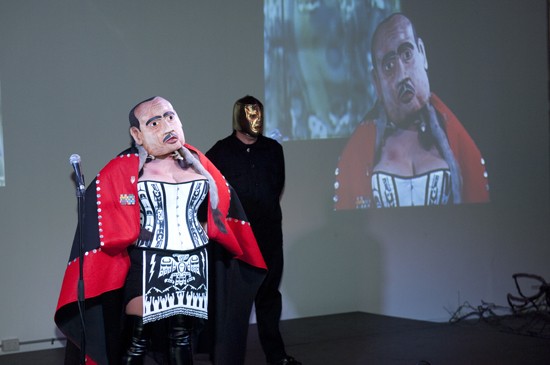 Skeena Reece  – Raven: On the Colonial Fleet (2010), performance at SuperDeluxe@Artspace for the 17th Biennale of Sydney. Photo Sebastian Kriete, courtesy the artist .

Like any large-scale contemporary art exhibition, “The beauty of distance” has its high and low points. In the catalogue Elliott writes about his enduring interest in the vernacular as much as intellectual and aesthetic traditions from across the globe. His ideas are borne out in the exhibition and there is much to delight. Yet, there is equally as much to frustrate. Ultimately in its imperfection “The beauty of distance” is a reflection of the rich madness of the art and peoples who populate this “precarious age.”