II. The World and the Home
Isaac Julien discusses working across multiple localities, the goddess Mazu and Angels of History. 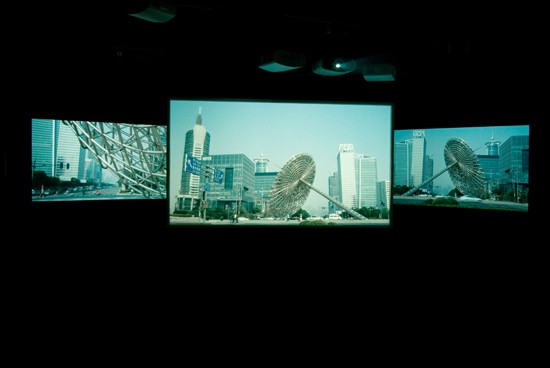 Tossed on the Communist road
We chose Capitalism through great perils
All we want is a life like others
TVs, cars, a house bigger than our neighbors’
Now the tide is rising to our necks
Ice forming in our throats
No moon shining on our path
No exit from the wrath of the North Wales Sea

ART iT: We’ve talked about your relationship with post-colonial theory and how some of your works develop from a kind of outsider’s ironic perspective. What was the turning point for you to look at China?

IJ: In a way China chose me. The Morecambe Bay tragedy in 2004 was something that moved many people in England, and in 2006 the documentary filmmaker Nick Broomfield made the film Ghosts based on those events. That same year when I was teaching at the University of Pittsburgh I attended a reading by the poet Wang Ping. I commissioned her to come to Morecambe Bay to write a poem, which she did, and a year later she sent me “Small Boats,” which became the genesis of a developing conversation.
The other thing is that China has had a presence in my life through my acquaintances and through looking at its cinemas. For example, Looking for Langston was screened at the Hong Kong Film Festival in 1989, so in film culture at least there’s been quite a long aesthetic dialogue between East and West.

ART iT: I spoke with Wang Ping and she said that you had planned to incorporate the Chinese material into your work Western Union: Small Boats (2007), about the phenomenon of would-be immigrants sailing from Africa to Europe in dangerous, makeshift boats, with many passengers drowning during the voyages. Where was the connection between those two ideas as originally conceived?

IJ: Ten Thousand Waves and Western Union: Small Boats are kind of sister projects because they’re both about people searching for the so-called “better life,” which, of course, is why my parents came to England from the Caribbean in the first place. In fact, Better Life was my working title for Ten Thousand Waves, but as soon as I found out that the 2010 Shanghai Expo was to be called “Better City, Better Life,” I thought, “OK, I better change my title straight away!” 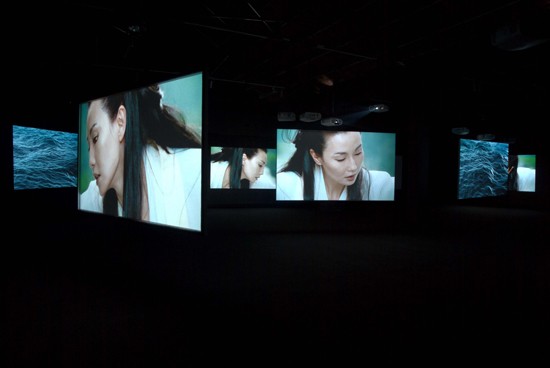 ART iT: Aside from the title, did your ideas about the project further change once you began working in China?

IJ: Yes. I had already done a lot of research on the Morecambe Bay tragedy in England, gathering newspaper cuttings and speaking with journalists, but when I actually went to China it seemed that I was viewing everything there from a very Western perspective. My dialogues with the poets, artists and filmmakers I met there began to get rearticulated in a deeper way through a conversation with the past.
My researcher at that point, the artist Jacqueline Hoang Nguyen, found these illustrated prints related to fables of the protector goddess Mazu, who, like the Morecambe Bay workers, originates from Fujian province. We read many fables but it was the “Tale of Yishan Island,” in which Mazu saves a group of fishermen at sea, that in a way allegorized the tragic events in northern England and related them to the story in China. So in Ten Thousand Waves there are scenes of Maggie Cheung flying through the forest as Mazu cut against police footage from Morecambe Bay that was shot from a helicopter, with the lone survivor on the beach, and it creates an eerie relationship between the different gazes these airborne viewpoints represent.
I’m very interested in the gaze, and because of this interest and some of the theories around the cinematic gaze, I want to have a sensitivity informing my approach to my projects. In that sense post-colonial studies have given me tools to look at questions from a different position than that of a typical Western outsider – which I know I am – in the hope that I can be “creolized” through a dialogue with the Chinese collaborators on the project.

ART iT: Did that attempt to shift perspectives through the device of the “Tale of Yishan Island” also appear in works like Fantôme Créole and Fantôme Afrique?

IJ: Well, throughout my works there have been protagonists who could be Walter Benjamin-style “Angel of History” figures. I don’t want to say that the Mazu character is an Angel of History because I want to look at the Chinese mythology on its own terms, but perhaps one could see a correlation.
Also, when we shot Fantôme Afrique in Burkina Faso I was interested in the way in which Ouagadougou is a cinema city, just as I was interested in Shanghai as a cinema city for Ten Thousand Waves. Since 1969 Ouagadougou has hosted the biennial Panafrican Film & Television Festival, which is the largest such event in Africa, and then Shanghai was the center of film production in early 20th-century China, so I think that’s also part of my attraction to these spaces. 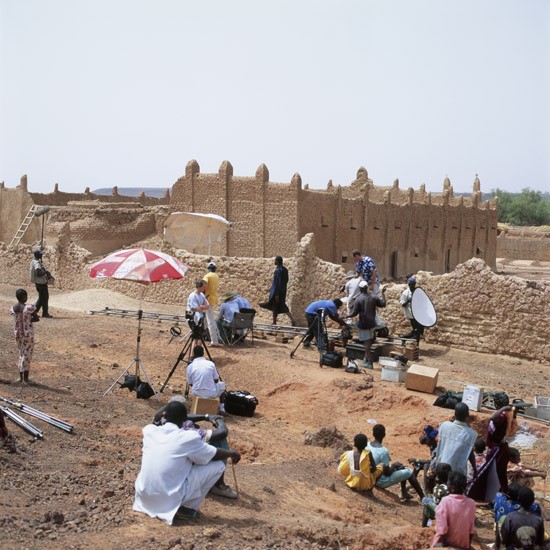 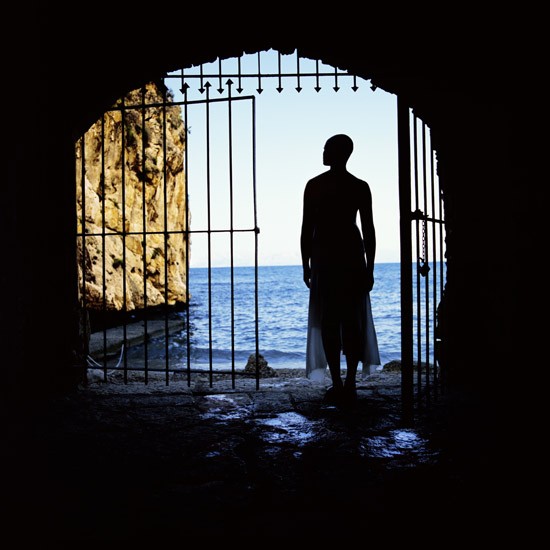 ART iT: When you’re shooting in Burkina Faso, St Lucia or Shanghai how do you navigate the tension between yourself as an outsider and the local perspectives?

IJ: In my extensive research I try to find points of artistic exchange and collaboration. In Ten Thousand Waves there’s an exchange between myself and the poet Wang Ping, and in Paradise Omeros there’s a coming together between myself and Derek Walcott, who won the Nobel Prize for Literature for his epic poem Omeros, from which my work’s title is borrowed. Derek actually performs in the film and wrote the narration. And then with regard to Fantôme Afrique, Ouagadougou was one of the first film festivals that recognized my work, and in the 1980s I was invited to participate as a diasporan filmmaker. I also shot the film with local film students.
I’m not going to deny that there can be tensions between the local and global or between myself as an outsider and the locations where I work, but – and here I don’t want to use the world “ethnography” because I am aware that the art world has discovered the documentary and I hope my work’s too stylized for it to be seen as such – I think there’s a way through my film installations in which I can develop what the Vietnamese filmmaker and critic Trinh T Minh-Ha calls a “near by” relation to those locations and perspectives.

ART iT: In that case was film one of the ways that you could access China? In Ten Thousand Waves you have scenes that seem to self-consciously reference Kung-Fu film’s use of wire stunts as well as some of Wong Kar-Wai’s 20th-century period films like In the Mood for Love.

IJ: There are certainly references to film in Ten Thousand Waves. The project became a kind of search for me. I wanted to look at Chinese culture and an ongoing dialogue with the aesthetic practices of that culture and find my own contribution to that exchange. In 1972 during the Cultural Revolution Michelangelo Antonioni was invited by the Mao government to make what became the documentary Chung Kuo, Cina, which interestingly was banned in China for many years but has since become significant as a record of different aspects of life at that time.
I didn’t use Antonioni’s footage but I viewed it. So I thought about Antonioni and also the Dutch filmmaker Joris Ivens, who had a deep relationship with China, making the documentary The 400 Million there in 1939 and then returning in the 1970s to document the Cultural Revolution in How Yukong Moved the Mountains (1976).
Essentially I’m working in this bricolage form bringing together what would normally be incongruous materials: police footage, CGI-manufactured waves, handheld video of Morecambe Bay and film footage of Maggie Cheung, and I have to mold all of that visual information or all these visual spaces together. To me it’s the sound design that does that, along with the parallel montage. However I think my work’s also in conversation with the visual arts and open to different interpretations. 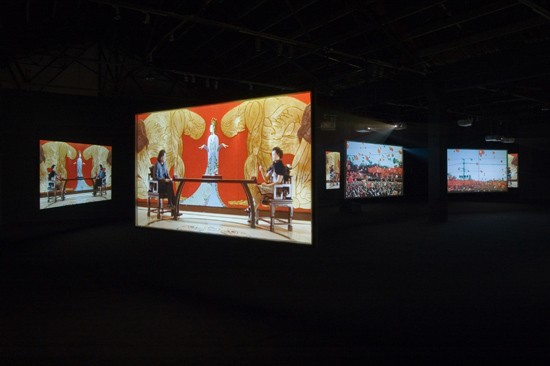 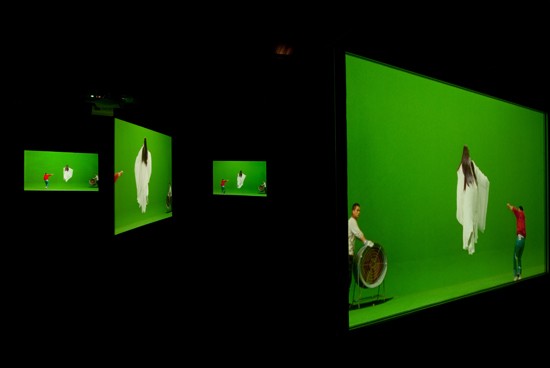 ART iT: Yet you mentioned that in Baltimore you were looking at Sci-Fi. Was that something that carried over into this project? The beginning of Ten Thousand Waves with the voiceover narration and the grainy helicopter footage has formal similarities to Sci-Fi or even Zombie films like 28 Days Later, which often start with a singular event – discovering the lone survivor – that then blows up to humanity-wide proportions. And of course the common Sci-Fi framework pitting the apparatus of the state against the freak of nature seems to parallel the situations of illegal immigrants and migrant workers.

IJ: Well, I don’t really like British cinema at all, but 28 Days Later was one of the interesting popular films that have come out of Britain recently. You’re right to bring up the Sci-Fi elements in Ten Thousand Waves because I do think of Shanghai as a Sci-Fi set in some way. There are sequences in the film where I’m thinking about a modernity that has a certain technology attached to it. It happens both in my framing of the architectural landscape and in the movement across different spaces following the contemporary goddess figure played by the actress Zhao Tao, which is also an updating of the title role from the classic Chinese film The Goddess (1934). So Zhao Tao’s character is moving as it were in time from the 1930s to the present as she passes from the historic Shanghai Film Studio to the high-tech Pudong area, and she could also conceivably be a relative of someone involved in the Morecambe Bay tragedy.

ART iT: Speaking of the different kinds of footage that you use, there is also a very striking insertion towards the middle of the film of about 30 seconds of documentary footage of what looks like the female relative of a deceased man going through his personal effects. Was there any reason for the footage being as short as it was? Was it an aesthetic choice?

IJ: In terms of the sequencing there’s Zhao Tao and Yang Fudong who are having tea in this sumptuous space and the archival footage of the Cultural Revolution-era parade, and then it cuts to the last story “The Tale of Yishan Island” and the green spatial drowning sequences, and then we see Maggie Cheung as Mazu, and then we cut to the footage you mention, which is from a Hong Kong documentary about the Morecambe Bay tragedy. I wanted to “suture” the sequences in such a way that you could think Mazu is looking at the footage along with the viewers. The documentary footage becomes an indexical element that cuts into the reconstruction scenes of “Yishan Island.”
It’s my desire for the documentary footage to be inserted as a flash-forward in time in the “Yishan Island” tale. The tale is set in the past, maybe the 16th century, and then this flash-forward connects the tale to the present day events of the Chinese cockle pickers at Morecambe Bay.
But that’s my reading. The artist’s intention is, of course, never the final reading. Somebody else might have another.
There were other images in the documentary of the fishermen’s relatives mourning and grieving their lost ones that I would not consider using because it would have been exploitative to do so. So it’s a political and emotional choice for the footage to be so short, rather than an aesthetic one.