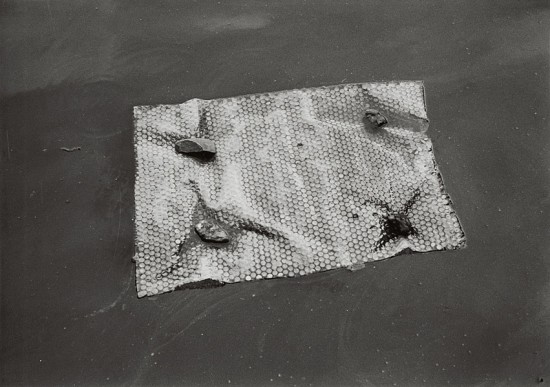 ART iT: Earlier you mentioned how in your “events” there was a tension between your own viewpoint and those of the different spectators around you. Would you say that as performances the events were less about putting your own action on display and more about achieving a kind of communal interaction?

KS: The idea behind the events was to start with some thing, and then transform that thing and its existence through action, to the point where that thing would be destroyed and cease to exist. Thus it was first necessary to present the thing to all the gathered people. Then I would start to apply all kinds of actions to that thing until it began to transform and splinter apart, generating a multiplicity of possible meanings. I would continue in that way until the thing began to disappear, as though it were being digested. Then finally it would be annihilated.
So for me the events were about presenting and destroying, and without giving them any specific point upon which to focus, I thought that in observing my actions the spectators could gain insight into how things transform, and then each take away their own different understandings of that insight. In turn I was observing how the different spectators responded to my actions and what they felt was significant or not, and then used those observations as the basis for the next action.

ART iT: You often wrote about both events and installations in terms of “activation,” or activating the space and materials. Did this concept also account for a transformative time element?

KS: As with space, time exists whether we are aware of it or not, because we are enveloped by it. So certainly things are transformed by time. My idea was that both time and space would change simultaneously, and the change itself would ultimately be the content of the expression. For example, here we are in Shizuoka, and someone else is in Tokyo, or Osaka, or you have some temple in Kyoto, and it’s possible to be conscious of the simultaneity of all those places, even if it is impossible to see them all at once. It may be a bit extreme to say that there is something fixing me to my current location, but certainly there is something that supports me or holds me in place. The same goes for the rocks in a temple in Kyoto, or a large tree off to the north somewhere. These are all synchronic things, all existing in time equally, and concurrently they are all coexistent in space, sharing space equally.

ART iT: We were just talking about the idea of the frame as a space for formative practice. Does such a frame also incorporate a time element?

KS: Action continues even when you’re not aware of it, and while you’re engaged in doing some action, time passes. Time and action are fixed in a very specific interaction. Even if you’re not particularly thinking about time, it’s always linked to action. If you don’t have that sensibility, then it’s impossible to achieve the sense of appearance and annihilation that motivated the events.

KS: Fundamentally there is not much difference. Certainly we can talk about differences between one site and the next, or one situation and the next, in the sense that each site elicits its own kind of “occupancy” or specificity. In other words, specificity is what creates meaning. And the specificity that creates meaning is completely different between a gallery and someplace else, because the gallery is already conceived as a specific space. When you work in a gallery you immediately start to think about the relations between the placement of the work and how people will view it. But when you work somewhere that has nothing to do with art, then it is only through your actions that you can establish factors like site and specificity. And it is only then that you can obtain a response, which arrives simultaneously with consciousness. That is when speech becomes possible. That is when concept and cognition become possible.
So how to create specificity is what distinguishes between entering a gallery and entering a place that has nothing to do with art. Based on specificity, the site becomes visible. At the end of the 1960s there was the emergence of one concept of specificity, “the site,” which started out with artists questioning what exactly “site” could be, and how to elicit the specificity of the site. Then you had Robert Smithson going out into the desert and picking up rocks – that’s where it begins. Such thinking about specificity is now indispensible. The point where you think about what exactly it is you’ve picked up in your hands and what kind of actions you’ve performed on it is where original expression begins.

ART iT: In the 1970s you were making works outdoors, things like small arrangements of rocks or branches in places like parks and gardens, which exist now only in photo documentation. Were these works experimenting with specificity?

KS: With those outdoors works I was completely on my own. I used to go on cold, winter days to places like Inokashira Park. I would start by collecting materials, then experiment with arranging them somewhere, and then shoot the photograph. I always enjoyed the idea that nobody else knew what I was doing or that the arrangements were artworks. Then one day there was a duck swimming in the lake, and when I saw how the duck’s flippers made ripples that spread across the surface of the water, I thought that this action itself had a kind of formative implication. With the duck as an “agent,” the traces of the movement of its flippers reflected a transformation of the water. I thought it was an amazing work, so I photographed the duck swimming through the water. That’s probably one of the harder outdoor installations to understand, but that’s the kind of thing that I was completely focused upon at the time: appreciating how some movement results in some kind of transformation. Then there’s the ambivalence of the site, and how we perceive our actions in relation to that ambivalence. The ability to make that perception itself is equivalent to formative practice.

ART iT: How did you understand or approach the performativity of the events?

KS: Conventionally, performance is about the actions of people. With the events the focus was on objects, and the reality of objects. The events were a rejection of the idea of performance as a phenomenon that arises from the movement of people. They always involved some thing or object that, when presented in contrast to my actions, could bring about the emergence of the specificity of the site, creating a kind of topos.

ART iT: How did each sequence of actions unfold? Did you have a plan going into each event, or was it something that arose from your evolving relationship to the things you were using?

KS: It was both. I would go to some space I had never been to before, so that I was seeing it for the first time and had no idea what I would encounter or what would happen there. But of course I was already considering what kind of actions I would use that day – like kicking things up with my feet, or reclining my body – and I would prepare some materials to bring to the site. So in the strictest sense the events were not predetermined, but certainly I had something like a file of possible actions from which I could draw for each occasion.
At the same time there were always unexpected differences at each site that led me to alter my plans. There was always a kind of indeterminacy to the events – I certainly had no interest in exploring the existence of already determined things. The events and the concept of activation were ultimately based upon responding to indeterminacy and ambiguity. Otherwise it would be just the same as working in a gallery space. So it was a sense of indeterminacy or uncertainty that drove each successive action.

ART iT: You also have events that coincided with installations, such as the works that you made in 1976 for the Istituto Italiano di Cultura in Tokyo. In the event, Differentiated Movement, you were lining stones on your thighs and arms, and then in the installation, Differentiated Movement – Continuous Existence, you also piled up lines of stones through the gallery space. In such cases was there any particular relation between event and installation?

KS: In piling the stones on my limbs I was using them as a tool for subduing the moving body. And then because the idea was that I would not allow the stones to fall, as I continued adding stones the event became more and more unusual. It was a process of immobilizing a living being. But working in the gallery the issue became one of seeing how the placement of the stones might affect the space.
In both cases I was investigating what transformations would occur based on how I placed the stones. In the event, it was as though I turned my body into a platform. Working in the space, the emphasis became the plane of the floor. That’s why the stones were necessary. They provided a commonality but they also illustrated the differences between the event and installation.

ART iT: Did the events have any kind of ritual aspect for you, or even an aspect of ritual dance?

KS: It’s not something that I myself proposed, but people who saw the events would tell me there was a ritual aspect. There were people who felt that the events had the atmosphere of being a kind of offering to the gods. The first time I heard this I was taken aback. But then I read a book about the Pacific Islands and how various tribal cultures do ritual dances to celebrate the new moon, for example, or to initiate a youth into adulthood, and I felt that such practices had an affinity with what I was doing.

ART iT: There is also an element of absurdity involved – did you ever think of the events in comedic terms?

KS: There may be an element of absurdity, but I never thought of the events as comedy – tragedy, maybe, but nothing to laugh at. Nor do I think there was anyone among the spectators who found my actions to be comedic. Everyone had the most serious and severe expressions as they watched. Everyone was completely focused on the actions.