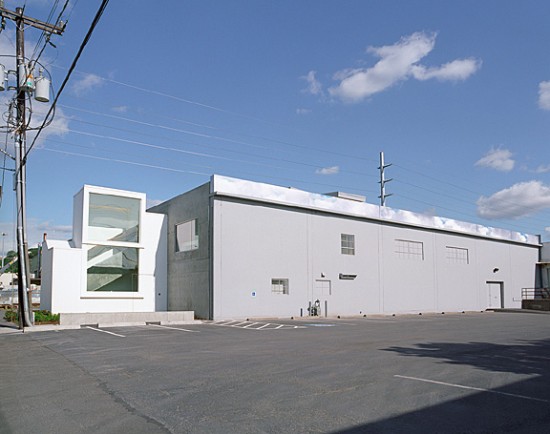 I was not in Seattle for the purpose of looking at art, and probably no one would have thought it amiss if I’d elected to fly in, do my talk and fly out. But in the past few years I’ve tried as often as I can to linger in places my work takes me, and absorb as much as possible about the local art scene. Even 24 hours can make a huge difference in one’s field of reference, and with Seattle I had a lifetime of accumulated ignorance to make up for, made worse by the fact that I’d actually spent time in both Portland and Victoria. As the birthplace of both Microsoft and grunge, Seattle looms large in the collective consciousness, so with the timely help of a few Facebook friends, I found myself on a recent Wednesday buckled in and ready to explore.

What I expected to see, beyond connecting with Greg Kucera – whose gallery has long been Seattle’s outreach to the rest of the country – and paying my respects to a couple of colleagues, was essentially a smaller version of San Francisco or Los Angeles, with galleries functioning more or less straightforwardly as feeders into local museums and private collections. What I encountered, however, was an art scene in many ways unique, in that the dominant role was taken by the exhibition spaces themselves, with the most interesting artistic discourses situated within an architectural framework. Even more intriguingly, this was not something that appeared to have been deliberately planned by anybody, but grew out of a core sensibility that seemed to be shared implicitly by nearly everyone I met. Last, and perhaps most strikingly, not a single high-profile architect was referred to during my entire visit. 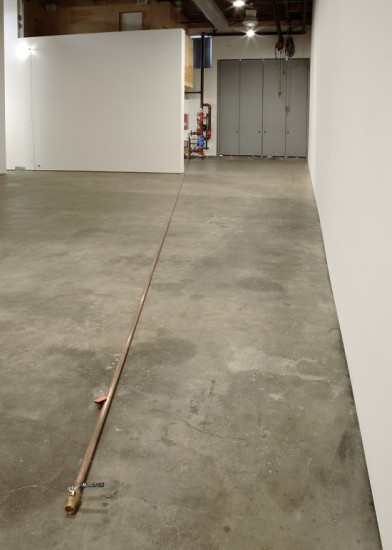 The bar was set very high by a visit to Western Bridge, which was the single most-recommended art spot in Seattle. A 10,000-square-foot renovated warehouse in the city’s industrial district, this nonprofit institution is funded by Seattle collectors Bill and Ruth True, who have a large collection of cutting-edge international contemporary art that they regularly rotate through the space, which was designed by local artist and architect Roy McMakin. McMakin’s design created a witty overlay of domestic architecture, highlighted by a gigantic double-hung storm window that ironically conflates the building’s original purpose with its current use. This was underscored at the time of my visit, which took place during the installation of the current show, “Box with the Sound of its Own Making” (through July 31). The exhibition, which opened a few days after I left town, features a sculpture by Jason Dodge that takes the form of a jerry-rigged system of piping that snakes across one of the main gallery floors, looking for all the world like a plumbing project arrested halfway. 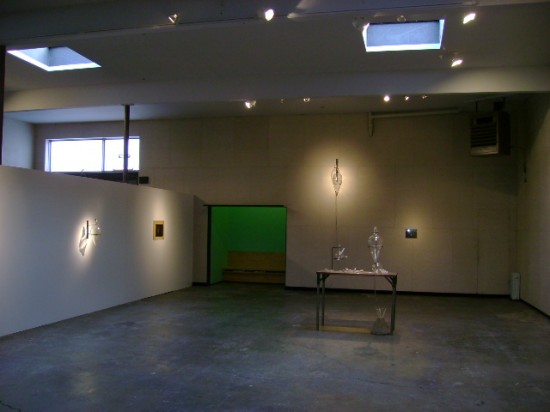 I thought the emphasis on architectural dynamics might take a back seat once we visited a few commercial galleries, and for the most part this was true. However, a stop at the exhibition of work by Elias Hansen at Lawrimore Project quickly disabused me of that notion. Owned by Scott Lawrimore, a former Kucera protégé, the gallery is probably the most visually stunning commercial art space in the US, outstripping any comparable venue in either Chelsea or Culver City. The space is huge, and, more importantly, has been broken up by the Seattle firm Lead Pencil Studios into a cluster of rooms, each of which has an extremely precise character. Tall ceilings and indirect natural light are balanced by a renovation that leaves just enough of the original building’s quirks intact so that walking into Lawrimore feels like stepping into every artist’s ideal vision of an art gallery. The Hansen exhibition, which fused sophisticated glass-blowing techniques with a critical take on the social utopianism of West Coast communes, felt like an overgrown forensics lab, with the accumulation of visual clues gradually leading the viewer towards a conclusive encounter that deftly turns our expectations upside down.

Having experienced both the commercial and non-commercial aspects of new art spaces in Seattle, I was still unprepared for the high point of the trip, which was the installation by Heather and Ivan Morison at the space Open Satellite, in Bellevue. Founded in 2007 by Su Development, Open Satellite is an unusual marriage between the art residency/exhibition paradigm pioneered in the 1990s by Artpace in San Antonio, and responds to the particular challenges faced operating within a car-centered community (more people seem to work in Bellevue than live there). The exhibitions change four times a year, with regional curators selecting national and international artists who are underexposed in the Northwest US, and an emphasis on large-scale site-specific installations that can be easily seen from the street, including by commuters in their cars. 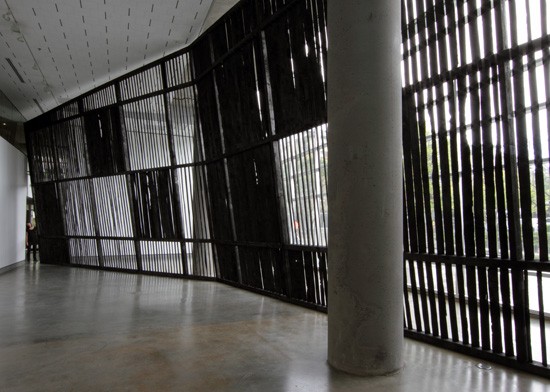 I can’t speak for the commuters’ experiences, but upon entering the space during the Morison project (through July 17), it was hard not to be impressed by the sheer physical presence of the work on display, Frost King, which is essentially a massive freestanding kite form constructed from scorched timber and planks. The title and form derive from Benjamin Franklin’s experiments with kites and electricity, specifically, his effort to create a single kite large enough to carry a human on its tail. Scorching is a way of preserving wood from decay, and in Frost King it has the added effect of transforming the entire structure into a meta-ruin – a memento of industrialized society that magically recaptures a sense of awe for the primitive by filtering the room’s ample sunlight into intricate patterns of shade and glare, thereby transporting visitors to a powerful sensory evocation of the original alpine forest out of which this pinnacle of high-tech achievement was first carved.