After a delay due to the Covid-19 pandemic, the winners of the 19th Taishin Arts Award were announced in a livestream presentation on Jul 10. The award is one of Taiwan’s most prestigious honors in the fields of art and culture, conferring NTD 1.5 million to a grand prize laureate and NTD 1 million each to laureates in the visual arts and performing arts categories.

In addition to the livestream presentation, which replaced the traditional gala ceremony, this year saw another historic first when the married couple Yeh Ming-Hwa and Chen Wu-Kang both took home prizes. Yeh won the grand prize for her site-specific multimedia performance project The House Behind the Wall, commissioned by the Taipei Fine Arts Museum for the Wang Da Hong House Theatre. Drawing on dance, Chinese opera, performance and video, Yeh reimagined the life of Wang Da Hong, one of Taiwan’s pioneering modernist architects, through three episodes entitled “Above,” “Strolling,” and “Living,” respectively. The jury were impressed by the work’s incorporation of spatial and relational dynamics into its realization, noting that “physically the performance grows from outside the wall to inside the house, and psychologically the audience’s role shifts from watching a performance to participation.” They commended Yeh for addressing the complex legacy of Wang Da Hong House Theatre “in a clear and layered manner” and “advancing the artistic practice of interdisciplinary exploration.”

Chen, who was also one of the performers in Yeh’s work, took the performing arts prize for his solo piece Dances for Wu-Kang Chen. Conceived in collaboration with French choreographer Jérôme Bel, Chen’s work premiered at the 2020 Taipei Arts Festival. Featuring 10 dance and nondance sections performed by Chen, it investigates how to define dance while revisiting Chen’s own life experiences. In the words of the jury, “the performance embodies the richness of life, highlighting the traces left in the performer’s body by his artistic formation and career development.” 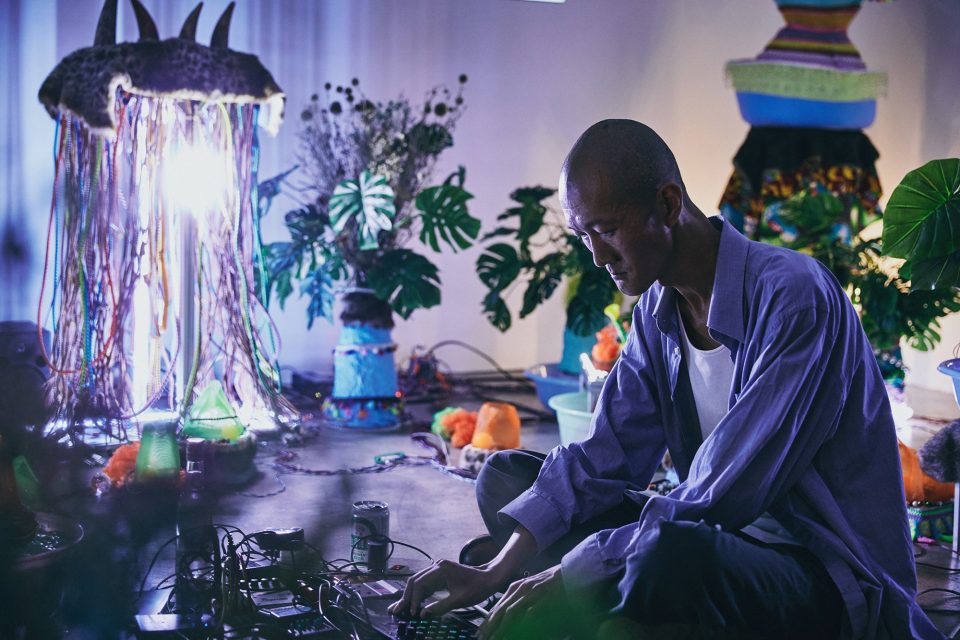 Meanwhile, the visual arts prize went to Taipei Robot Man 2.0: Infodemic, by Chang Ting-Tong, Cheng Hsien-Yu, and Dino. Presented at both TheCube Project Space and Longquan Market, the project bridged a conventional art space, an active wet market, and online media to reflect on the volatile social landscape during the Covid-19 pandemic. At the project’s core was a program designed by Cheng to capture and transcode statements by online trolls and fake news into a live data stream that was in turn used to control kinetic instruments by Chang at TheCube and light installations and “scent devices” at Longquan Market, respectively. Reading the work through the metaphor of “viral hotbeds,” the jury stated that Taipei Robot Man 2.0 uses “the agency of artistic creation to expose the incendiary power of explosive messages and the naked fragility of human beings in the midst of the pandemic.”

This year’s jury was led by theater director Li Huan-Hsiung, and included art historian Chen Kuang-Yi, artist Kao Jun-Honn, curator and art critic Lu Pei-Yi, and Wang Po-Wei of the Digital Art Foundation among its members. In concluding remarks to the livestream, the Executive Director of the Taishin Bank Foundation for Arts and Culture Cheng Yali noted the ongoing difficulty of living with the pandemic, and asserted that “It is our belief that any and every situation we experience has its merit. Art demonstrates a greater power when encountering restraints and difficulties.”

A recording of the award presentation is available for viewing on the official website of the 19th Taishin Arts Award.