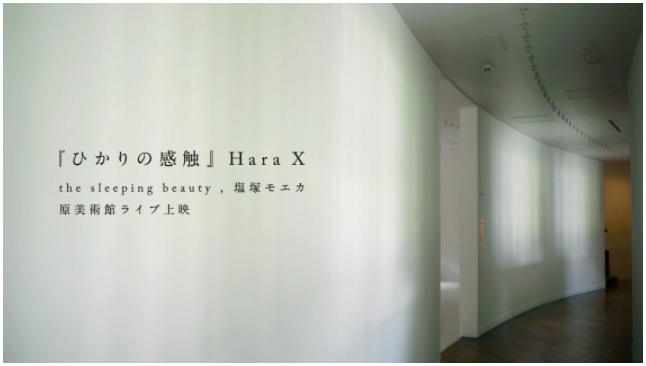 In 2008, sleeping beauty gave a live performance at the Hara Museum. This will be their first performance at the museum in 12 years. Moeka Shiotsuka, who wrote the song Ningen Datta (I Was a Human Being) for the group Hitsujibungaku after being inspired by an exhibit at the Hara Museum, will perform live near the stairs on the second floor of the museum.
This event, organized by orange plus music and Mizuiro Design, weaves together music, video projections, scenes of the Hara Museum and mini-interviews to capture the actual light that fills the museum and the “light” that fills the hearts of those touched by art and music.

Date & Time
January 9, 2021 (Sat.) From 17:00
Ticket purchases and viewing of the archival video will be possible until Saturday January 23.

Where to Purchase Tickets
『ひかりの感触』Hara X the sleeping beauty , 塩塚モエカ

the sleeping beauty
After winning a prize at the Ecole de Ryuichi Sakamoto contest organized by Sound & Recording magazine in 1966, the unit was launched with Midori Tamura (sax, accordion, vocals) and Shion Tamura (piano, keyboards) as the core members. It has released three CDs to date: no sound and no silence, liv and auguries. In addition to being long-selling items at museums and other outlets, their tracks have been used in many TV programs. In November 2008, the unit gave a live performance at the Hara Museum of Contemporary Art and thereafter played at a variety of spaces such as cafes and galleries. In the spring of 2021, they are set to release a CD co-produced with guitarist Norimasa Sakanoshita.
www.madeleinerecords.com

Moeka Shiotsuka
The guitarist and vocalist of the band Hitsujibungaku and the writer and lyricist of all of their songs. Formed in 2017, the group has released four EPs, one limited-edition single, and two full-length albums. On December 9, they launched their new album POWERS. In solo performances noted for their weightless, floating quality, she accompanies herself with guitar and at times vocal effects. She has also worked as an accompanist for movies and TV dramas, while the transparent quality of her voice has led her to being featured as a guest performer in works by other artist and in commercials. Her iconic character has attracted much attention in other areas such as the fashion and culture.

Mizuiro Design
In pursuit of the “Renovation of Things, Mizuiro Design creates both tangible and intangible things, focusing on UX/UI design in a variety of fields such as video production, exhibition planning, and “ba” (place) making. He is currently extending his activities beyond the boundaries of design and art with the hope of “making the world a little bit more wonderful.” In 2016, he held an exhibition of light-blue design works at the Negishi Natsukashi Park (the former residence of the Yanagishita family), a venue designated a tangible cultural property by the city of Yokohama. Nine installations were presented at this event, which was held with five musicians and a calligrapher as guest collaborators.
http://mizuiro-design.com

orange plus music (Yutaka Ishimatsu)
Yutaka Ishimatsu has a particular fondness for ambient, electronica, acoustic and other types of calm music. He wrote original music for his own band, then from 2018 began undertaking personal projects related to the areas of PR, creative productions and events. He has held several performances outside of the usual live-house venue, for example at planetariums, guesthouses and cafes. Bt applying new concepts, he seeks to create a new and more expansive fan base.
https://orangeplus.me/