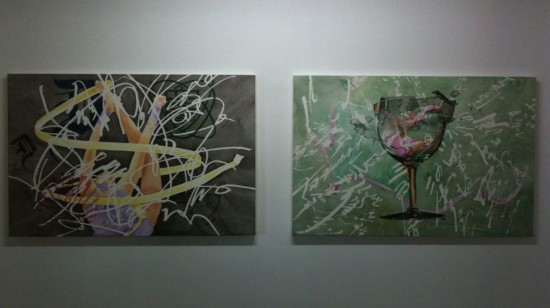 Part of a two-venue exhibition organized in conjunction with Capsule Gallery in Setagaya-ku, “Darkness in Pink” marks the return of Chihiro Mori to Tokyo after her 2008 solo show at Kodama Gallery. Included in critic Midori Matsui’s survey of recent Japanese art held at Art Tower Mito in 2007, “The Door into Summer: The Age of Micropop,” Mori is part of a loose group of artists who have returned to figurative practice as a way to deconstruct conventions of signification. As evidenced by the works on display, she has spent the hiatus refining her ideas, producing an exhibition that, after an initial retinal impact, slowly shifts into conceptual focus.

Anchoring the display, a new set of medium-sized paintings in acrylic wash on paper clay overlay images of gymnastics performers on colored grounds with a chaos of signatures, icons and sports insignias sampled from sources as diverse as the Kyoto Fire Department to the Detroit Tigers baseball team. Their bodies contorted into strange positions, the disarmingly kitsch images of the performers provide a dynamic axis to each composition, from which the signs radiate or extend in a gestural, disembodied profusion. Produced entirely through manual techniques, these paintings evoke the floating digital space of the computer or television screen, reflected as well in a large painting on the opposite side of the gallery based on footage of a rock concert taken from an NHK broadcast, and seem to imagine in part what would happen if the human body were inserted in that realm beyond physics.

Also included is a large, loosely scrawled wall drawing of the main Japanese islands, the names of the prefectures placed alternately with precision or without any regard for the corresponding position in official maps, as well as a group of quasi-sculptural exercises in which fragments of the details from Japanese banknotes have been enlarged and printed out onto wall-mounted armatures. In tandem with the paintings, these works find Mori fruitfully investigating the schisms between gesture and representation, as well as what happens when locally established symbols begin to circulate beyond their scope of meaning. If this is well-trod painterly territory, Mori brings to it a new sense of timeliness for an era when knowledge is both more diffuse and yet more opaque than ever.

At Capsule Gallery, “Colorful Mud” continues through May 6, featuring photoworks and paintings.