OBSERVATION IN ACTION
By Andrew Maerkle 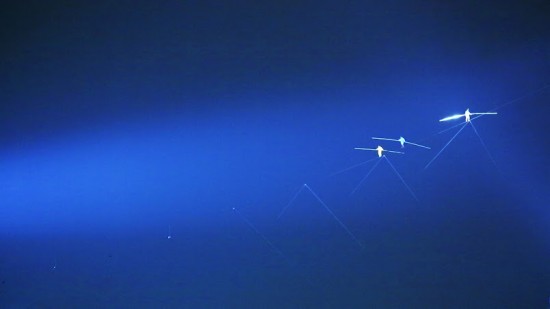 One of China’s most impressive young artists, Zhou Tao works across diverse media, but is best known for videos set on the borderlines between built and natural, real and fictional, linguistic and performative space. In the early work Chicken Speaks to Duck, Pig Speaks to Dog (2005), for example, the disembodied camera films a group of middle-aged men, perched in a tree bathed in surreal green glow, as they make various animal calls. In South Stone (2011), he and a partner make bodily interventions into one of Guangzhou’s “urban villages.” They evoke a pair of dancers moving through the landscape, but occasionally the camera stops to observe the cats stalking the rats through the dilapidated human structures.

In February of this year, Zhou Tao’s work was shown for the first time in the Yebisu International Festival for Art & Alternative Visions 2016, “Garden in Movement.” His most recent video, Blue and Red (2014), was on display in the festival’s exhibition section, while Collector (2012) was included in a screening program of works by young Chinese artists, “Garden, forest and city: Video art from contemporary China,” at the Yebisu Garden Cinema. ART iT met with Zhou Tao after the screening to learn more about his work.

The 8th Yebisu International Festival for Art & Alternative Visions was held at multiple venues in the Ebisu district from February 11-20 of this year. 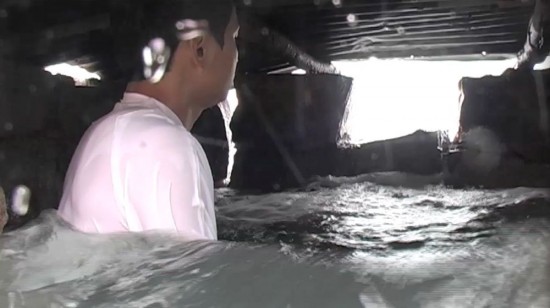 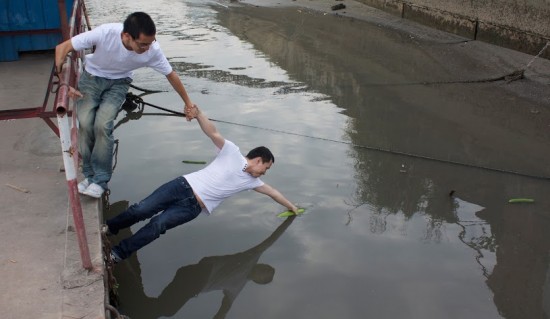 ART iT: In addition to the works on display here at Yebizo, Blue and Red (2014) and Collector (2012), your works have involved everything from filming men sitting in a tree making animal noises to performative interventions into urban space and spending an entire day in an abandoned bunker on a beach. How do you decide what to focus on for each work?

ZT: For me it happens relatively naturally, but I observe my living environment whenever I change homes, or I move from place to place, and I discover all kinds of things through that process. I pay attention to the terrain, the light and the climate, and that helps me to grasp the characteristics of a place. For example, if the sunlight seems different, then I try to understand in a concrete way why it is so. In Guangzhou I usually live in one district for a few years and then move to another. I even live apart from my family. But wherever I move, I try to live as the locals do. It’s not just about finding things, but also choosing subjects, being led to subjects, and stumbling across things by accident.
For example, in the case of Tide (2008), after completing my graduate studies I spent some time working in Zhuhai, opposite Hong Kong, and I found many crumbling bunkers on the beach there. They were originally used for national defense, but became obsolete after the handover of Hong Kong in 1997, and had just been abandoned. So I repaired one of the bunkers and spent a day doing a performance there. I stayed in the water thinking about all the past events that might have happened at that place.

ART iT: For me, there is an element of dance or choreography or ritual movement that connects your works. Is this something you consciously seek to incorporate? For example, the group exercises that you film in 1234 (2007-08), and the men walking around on all fours in Collector, and the movements of the people walking around in After Reality (2013) – they all seem to have an element of dance in them.

ZT: I just spontaneously respond to what happens as I film the things that are occurring in the environment. It’s like I’m placing my body into the environment as a medium in itself. But I have never thought about dance as an element of my work. The men in Collector, for example, were practicing how to walk like animals. When I came across them, I actually wanted to ask someone else to do the filming so I could join in, but since I was alone I had to operate the camera myself.
There is some performance in After Reality, which I filmed in Paris. Certainly the actions that you see in the video are like a clue for decoding the work. Guangzhou has a hot, tropical climate, and people go around in light clothes and shorts, but when I got to Paris it was snowing and cold. So it was partly out of a sense of mischief that I wanted to walk around snowy Paris while pretending that I didn’t care about the cold. Our actions in a sense were a form of resistance against the weather, and this put the film into a climate where summer and winter collapsed into one another – into a space-time from which seasons had been erased. 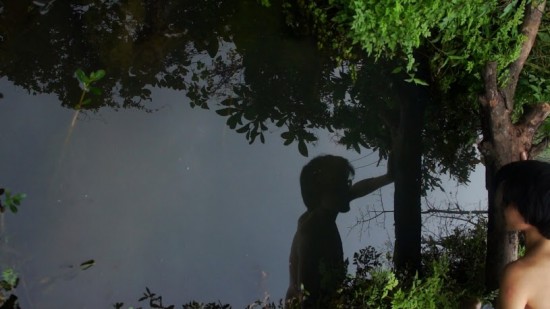 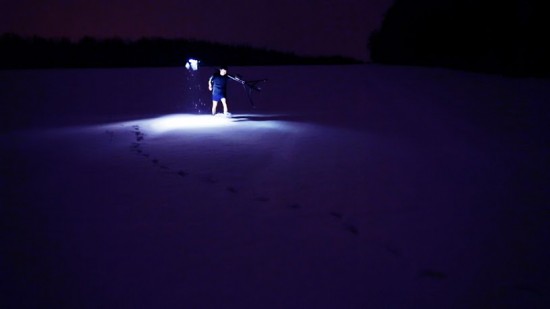 ART iT: But I think there is a strong relationship between dance and space, or dance and environment, for that matter. We’re not necessarily conscious of the space around us in our normal movements, but taking Noh theatre as one example, dance is a way of measuring space.

ZT: I think the same could be said for me. Previously I expressed the idea of measuring space through performance and actions, but recently I’ve been reducing that element, even as my thinking about video has deepened. It’s as though through video I am directly cutting out pieces of place and time and space and presenting them as they are. But I’m not quite sure about what exactly emerges spatially through the accumulation of time. I just keep shooting material, without really knowing where it will lead once it’s all collected. I don’t want to make something like a movie with a clear story. The important thing for me is what I sensed when I was filming, and so as to not forget that as I edit the footage, I try to rediscover it as I work. It’s like I reconstruct the fragments of footage that I have collected. This also relates to sound, but everything becomes more abstract. I actually like movies, but there’s no way I could ever make a feature film in the strict sense, and I could never be a film director.
Recently there is an “anti-film” movement emerging on the Internet, which encourages all kinds of experimentation. In the case of film, the story unfolds from beginning to end, but in anti-film there are all kinds of divergences and everything gets mixed up. In a similar way I am concerned with how to recover original, direct emotion, how to expand possibilities, and how to produce something that spans multiple fields.

ART iT: So how do you understand your own relation to the camera?

ZT: Well, I don’t think it would have been possible to make the films I do 30 years ago. The cameras were big, you had to be a professional to operate them, and the act of filming was somehow ritualized. It was obvious who was doing the filming; Dziga Vertov’s Man with a Movie Camera also comes to mind. But now, anybody can shoot with their mobile devices, and people unwittingly become subjects for the camera. So the awareness has completely changed. It’s like the camera has become an extension of the body – an extension of the hand, something that is inseparable from the body. The camera is part of the body, and the body is part of the apparatus.
These changes in technology have certainly had a strong influence on film and video. In the past, if some incident happened, the only thing possible for most people to do would be to simply witness the event, whereas now they not only “witness” but also “film.” This shift toward the camera becoming part of the body has happened almost unconsciously. And it’s not just about filming, because as soon as they film something, people put the video online and it spreads. It’s ubiquitous now. So at a time when all this information is proliferating, even part of an image that has been cut out from that broader fabric – even a fragment – has its own reality. I think it’s possible to make something out of all those small parts in a way that differs from theatrical films. 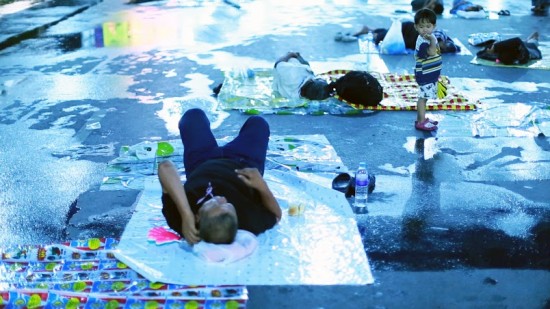 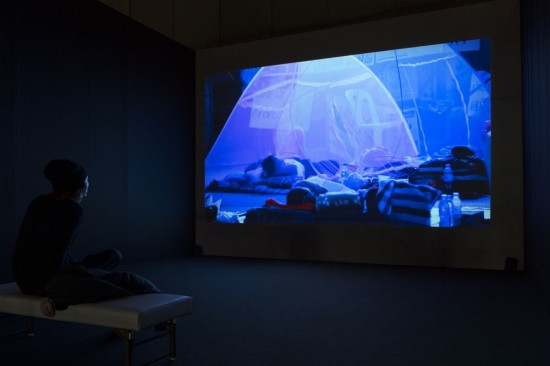 Above: Still from Blue and Red (2014). Below: Installation view of Blue and Red at the 8th Yebisu International Festival for Art & Alternative Visions. Photo Kenichiro Oshima, courtesy the Tokyo Photographic Art Museum.

ART iT: Watching Blue and Red I thought the film somehow relates to the classical Chinese philosophy of wei wu wei, or doing without doing. Particularly with the footage shot in Bangkok of protestors lying around and sleeping, I thought that as an act of resistance it is wuwei – passiveness – that is more effective than action.

ZT: That’s really interesting. Because the moment you articulate it in terms of wuwei it can no longer be wuwei. Certainly the form of resistance based on occupying a place has been gaining in popularity recently, starting with movements like Occupy Wall Street. But I’m not sure that it relates to wuwei. The example from Thailand that you mention was interesting, because tens of thousands of people were just lying around, as opposed to doing something. The sleeping people were very animalistic, each moving around this way and that, and when the light hit them I thought I saw something like their desires emanating from their bodies. Of course they would get up and chant slogans and so on, but I thought that the desires that emanated from their sleep were themselves an expression of resistance. That disjunction between consciousness and unconsciousness was fascinating.
There are all kinds of associations that arise from your question, and I think there is something deeply resonant about Asian thought. For example, in terms of politics, in ancient China whenever a crisis happened the literati would express their resistance by retreating to the mountains and cutting themselves off from the world. In Bangkok, I think that stance could be seen in the image of the sleeping people, who could only unconsciously perform the most basic of movements. It was like they had found a literati-style resistance of retreat and seclusion in the unconsciousness of sleep. This showed me that “sleep” can be a more interesting and profound form of political action than “occupation.” Tens of thousands of people asleep in a square is a bit frightening, actually. It’s similar to letting your brain go completely unconscious in a real world situation, and replacing the “flight” of the ancient body with the “escape” from consciousness as a form of “retreat and seclusion” that is better suited to contemporary destiny. Now, through the pervasiveness of national identification systems and our awareness of how easy it is to connect to and be controlled by others over the Internet, sleep is the only way to truly cut oneself off from the world. That is how we can show our true feelings.