We Are the System
By Andrew Maerkle 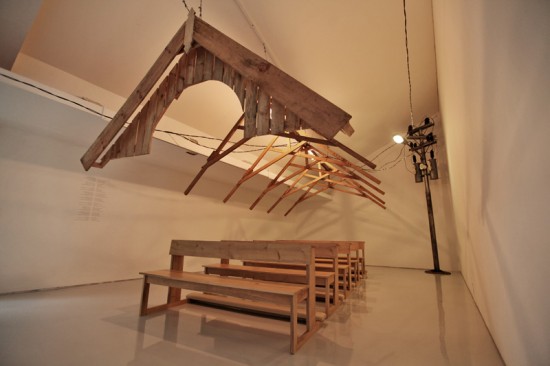 A Space between You and Me (2011), installation of wooden chairs and wood, speakers, iron electrical box. Courtesy Ark Galerie, Jakarta.

Part of an energetic, community-driven art scene in Yogyakarta, Jompet Kuswidananto makes multimedia installations that often combine video, sound and mechanized elements. His installation Java’s Machine: Phantasmagoria (2008), for example, presents a ghostly phalanx of bodiless figures delineated only by empty pairs of shoes and fragments of ceremonial military dress, as well as objects such as drum kits that periodically crack out a sharp, hollow percussion. Dealing with the elusive representation of Indonesian national identity, this installation develops from a broader, communal project of self-intiated historical research by Jompet and his peers that has also fed into an ambitious commission for Hong Kong’s Para/Site Art Space in late 2010, “Third Realm,” and a solo exhibition at Bandung’s Selasar Sunaryo Art Space that opened March 26 of this year, “Java’s Machine: Family Chronicle.” ART iT met with Jompet in mid-2010 to discuss the research-based aspects of his practice.

ART iT: You mentioned that you started out not in art but in music, and that you are essentially self-taught as an artist. Can you talk about how you came to work in the visual arts field?

JK: The first art for me was music. When I was at university I supported myself through participating in bands and making scores for theatrical performances and videos. Over time I gravitated to making more experimental sound performances, and then one day a curator invited me to participate in an exhibition, and I found myself in the middle of this new art scene in Yogyakarta. Although I didn’t study art at school, in Indonesia the educational infrastructure is not really developed to begin with, and since the society in our country is quite communal, the community takes over the role of the large-scale institutions, providing members a kind of informal education. On top of that I became an assistant to established artists like Arahmaiani and Nindityo Adipurnomo, who also runs the art space Cemeti Art House with his partner Mela Jaarsma. That proved to be the most effective and efficient way to learn art. They accepted me. The system is there and it’s really open.

ART iT: Do many other artists learn this way as opposed to through academic training?

JK: I think many artists do go through art school, but they don’t really expect the education to determine their careers. The community is the system, so even if you don’t go to school, if you’re active in the community it can be enough. Everybody shares ideas and discusses art with each other. It’s a valuable resource because the government is so poor – or at least corrupted – and doesn’t support art. 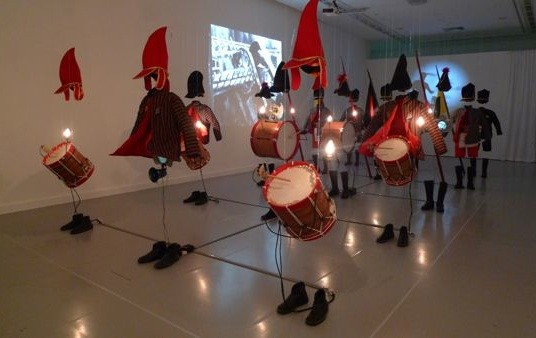 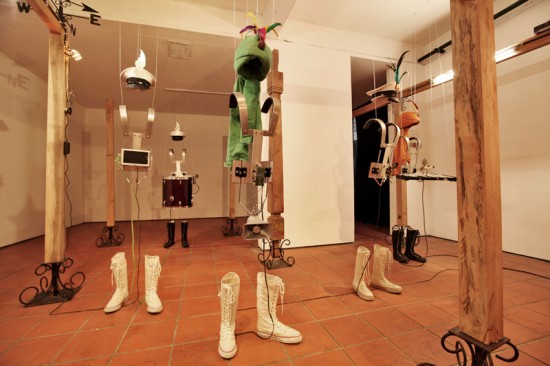 ART iT: When did you start making the mechanized “ghost figures” with the military parade uniforms? I remember seeing your installation Java’s Machine: Phantasmagoria at the Yokohama Triennale in 2008.

JK: I exhibited the first version of this work in 2008, several months before it was included in the Yokohama Triennale. Prior to that I was making more interactive pieces, although the incorporation of video and mechanical things and sound has always been a part of what I do.
I started the project when I was researching the history of Indonesia, specifically, the history of Java. The history is incredibly complex, with many transitions, from Hindu religion to Islam, from colonial to post-colonial, traditional to modern, dictatorship to democracy. In my research I found that Indonesia has been in a constant state of transition, and the cultural identity constantly changing and unstable, with many layers. Usually we think about transition in terms of binaries, but in my view the reality goes beyond binary terms; it’s what I call the “third reality.” The idea for the hollow figures came from this imagining of the body as always developing or changing, and this need to constantly develop new realities as a strategy for negotiating the competing binary tensions that affect Indonesia.

ART iT: Are you still involved in the kind of performance activities that you were doing at university?

JK: I am. One important community I belong to is a theatre group that I joined in university. The group, Teater Garasi, has now developed into one of the most significant independent groups in Indonesian contemporary theater. The organizational structure incorporates several directors, each with their own styles, working with an executive director who has a more abstract or non-narrative language, and we produce dance-theater-performances that draw from all kinds of references. Currently I focus on my performance activities in the context of Teater Garasi and then pursue personal projects on my own, but there is a strong overlap between the two. We research the same ideas and issues, even if we express them in different ways.

ART iT: Do you ever contribute to the actual staging of the Teater Garasi performances, or only the conceptualization?

JK: None of us have academic backgrounds, so we have no boundaries. I can offer my opinions about anything from the acting to the music, and everybody can contribute many different ideas. In the discussions there is no sense of strict discipline – it’s all fluid.

ART iT: Where does the hunger come from to invent these new approaches to art, dance, performance?

JK: Well, art for me has both a social role and is also about self-discovery. My research into the history of Indonesia started because at the time I felt my generation had become distanced from our traditional history. I felt I had lost my roots but couldn’t explain why. In my family, my grandmother was a traditional animist, my father is a Catholic and I am a second-generation Catholic. So much of the knowledge that belonged to my grandmother could not be transferred to my father because of their different views, and this is something that has happened to many other families in Indonesia as well. At the same time the history education in school concerns only the history of power and military events, the ruling agenda. The real history of our society or culture is not being told, so I started to research this by myself and with the Teater Garasi group. We have recovered a lot of valuable information, and then that research takes on a social role when we present it through an artwork, because it is an alternative history to what is taught in school. 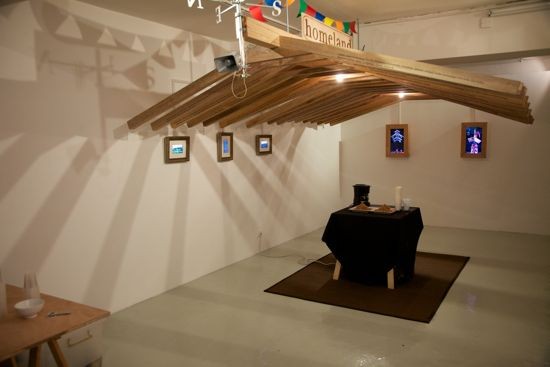 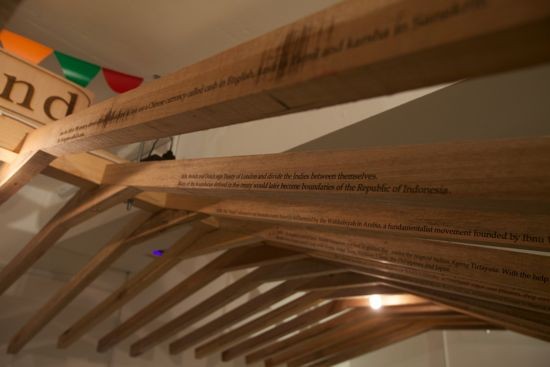 ART iT: Where do you go to research the history?

JK: We travel. There are artifacts, there are living people, there are local museums – we travel across the country seeking them out. The works that have come out of this have been important for everybody involved – some 15 or 20 of us – so it’s a significant project that I think will continue for a long time. We found that actually what we are looking for is a way to negotiate the changes of time, which is all the more difficult because the problems change across different places and different times. One of our major concerns is to understand how people negotiate the acceleration of changes in time.

ART iT: What do you ask when you interview local people? Do you discuss specific topics like the post-war Independence era?

JK: We ask many questions, but the questions themselves are not that important, because we do not position ourselves as being somehow outside the problem. We are a part of the society and we want to work with other people to try to find an answer. We don’t discuss political epochs so much as the practical ways we deal with the overlapping tensions generated by the multiple transitions that Indonesia has experienced over the course of its history. It’s really difficult to identify Indonesia now. It’s like a collage, and the past is not really the past.

ART iT: And now following the ages of the Sultanates and the Dutch colonization, and then the regimes of Sukarno and Suharto, you have the potential of a new layer of transition with the rise of a fundamentalist Islamic democracy.

JK: Yes. Part of my research is about the idea of the homogenization now emerging in Indonesia since the full embrace of democracy. Democracy actually paved the way for increased homogenization. At the same time, the political power of the fundamentalist parties is not really that strong, and you have to remember that Indonesian culture is really complicated so it’s unlikely their ideas will ever be completely accepted.
This relates to another important avenue of research I have been conducting, on the social group called Abangan. Translated literally, “abangan” means “red,” but culturally it corresponds with the English use of “gray.” The Abangan are a layer of society that began to emerge during the first modern era in Indonesia around the end of the 19th century. They live in tension between conservative Islam and a mix of local beliefs. So in Indonesia if you say “I’m a gray Muslim,” then it means you’re a Muslim because of your heritage but not a strict believer. I find this idea can be applied not only to religion but also to many different aspects of Indonesian society now, and it’s become a very complicated and sophisticated system for navigating identity. I would say that Indonesia itself – the nation – has been constructed through the idea of being a “gray nation.” We are not Communist, we are not liberal, we are not West, we are not East. We can say our country is based on the belief in one god, although in practice we have many different religions and traditions – so it’s not true, but that’s OK. I think the recent concerns about growing religious fundamentalism are more tied to the media, which exploits the sensationalism of the extremists. 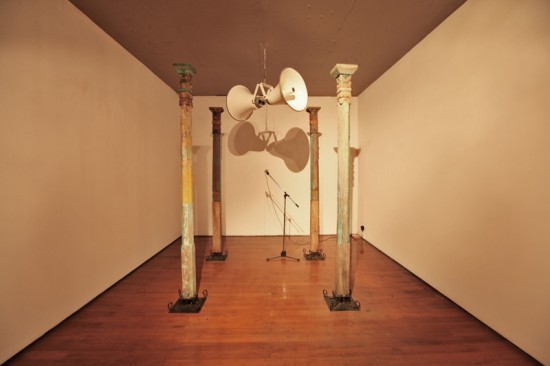 ART iT: So the idea of the ghost figures is tied to very real issues of “grayness”?

JK: Yes, exactly. The first ghost figures wore the uniforms of the Javanese Royal Army. These uniforms were purely ceremonial, and created after the end of the Java War in 1830 as a kind of negotiation between the Dutch and the Javanese kingdom. Following the war, the Dutch modernization campaign spread extensively throughout Java. The Dutch built factories, roads, bridges: all kinds of infrastructure. But I found that the appearance of the army uniforms with their mix of Western and local elements represented a new kind of war, a war of symbols, and the battlefield for this war was the body. This battle to manage the symbols on one’s own body started 200 years ago and continues today. The idea of negotiating the transformations of time and culture has not ended, it just continues in a different way. It’s very significant to me that this idea stems from the military – a defensive mechanism. The ceremonial army became a new way for the Javanese to defend themselves, or negotiate the modern era, by managing the symbols in their lives.

ART iT: How do you see the project developing from here?

JK: Now I am looking more into the history of this idea of the Royal Army. In my recent pieces I have tried to find a new approach to the presence problem. The figures take the appearance of the carnival or parade. In Indonesia this is a common symbol. We are always celebrating the invention of the community, and the changes of time.