ABOUT STUDIO MUMBAI
By Naohiko Hino 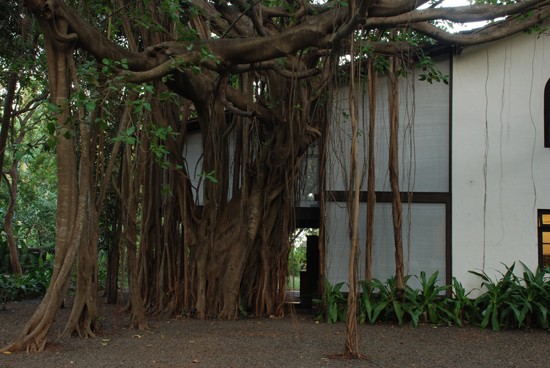 I simply had to ask, “Why are you an architect?” In interviewing the principal of Studio Mumbai, Bijoy Jain, I gradually felt overcome by a kind of confusion, a confusion born of the pliability and inscrutability of his responses to my questions. Although he carefully chose his words and spoke with candor, I felt the discomfort of digging deeper and deeper into the conversation and not coming any closer to the bottom. As with peeling the skin of an onion, in attempting to uncover the core, it was disappearing before my very eyes.

In most cases, architects are above all else practical, and it is this practicality that forms the underlying structure for their worldviews and logic, their methods and styles or tastes. This is because if there is no firm consistency in the decisions they make – no matter the decision – the team play required in practicing architecture will suffer as a result. And, indeed, if one can identify that consistency then one can also identify the “character” of the architect, yet in speaking with Jain it never quite became apparent. Maybe upon reading the interview this will be communicated in some way. That is why, in attempting to sound out through such a serious conversation the unreachable depths of Jain’s unique pliability, I felt compelled to risk offense in asking, “Why architecture?”

Here I should offer a broader introduction to Bijoy Jain and Studio Mumbai. Now based in the outskirts of Mumbai, Jain was born in 1965, studied architecture in the United States and gained practical experience in the United Kingdom and the US before returning to India in 1995 to establish Studio Mumbai. Since then, he has produced a unique architecture that balances between Indian tradition and the contemporary, conceived by working in close collaboration with local craftsmen to innovatively apply traditional techniques and materials to his designs. Studio Mumbai gained international recognition after winning a special mention at the Venice Architecture Biennale in 2010, and exhibiting that same year at the Victoria & Albert Museum in London, and the firm’s activities have been closely followed ever since. In Japan in 2012, the TOTO Gallery Ma held the exhibition “Studio Mumbai: Praxis,” while the group of pavilions collectively titled Natsu no ie (Summer Houses) was erected in the front garden of the National Museum of Modern Art, Tokyo.

An architect of the preceding generation who shares many commonalities with Jain, and who is in fact deeply respected by him, Geoffrey Bawa is a classic example of someone who is understood from this context. Based in Sri Lanka, Bawa was rooted in the historical landscape and architectural tradition of his homeland, but also achieved a brilliant synthesis of those roots with contemporary living. In his approach to constructing space and in his understanding of the relations between interior and exterior, Bawa employed forms almost directly taken from tradition. For example, he would often create depth by multiplying the form of the interior courtyard, or use nesting to create a complex interweaving of spaces. Continuing a South Asian tradition filled with both intimacy and openness, he also sublimated that tradition through contemporary architecture.

The architecture of Studio Mumbai does not rely upon traditional schematics to the same extent. Rather, their architecture is made by building the space in a somewhat ad-hoc way in response to the conditions of the site, and by recreating disappearing techniques for dealing with materials and engineering, or, as necessary, developing their own solutions in collaboration with the groups of craftsmen with whom they work, This approach is completely unique, apparently free of the hierarchy in typical architectural firms between the architect as decision maker and the bloated staff employed at making studies for the architect. Rather, the process seems to be that Jain goes to the site with the staff and craftsmen, where they arrive at the basic design concept through discussion, and then refine the details while the craftsmen assemble the mock-up and the actual building. According to Jain, the role that he plays here is primarily to sustain and to orchestrate the space for collaboration.

Originating some 30 years ago, it could be said the concept of critical regionalism no longer corresponds to contemporary architecture. As for the confusion that I mentioned at the beginning of this essay, more than anything it drove home the fact that there is clearly something that cannot be explained through the cultural imperialist schema of the center and periphery. What it recalled for me was the concept of tradition as defined by TS Eliot in the essay “Tradition and the Individual Talent” (1919).

As a poet, Eliot did not approve of seeking the source of poetic transcendence in individual concerns and inspirations. For him, the transcendence of poetry would appear exactly in poems born out of the poet throwing himself into and fusing with the tradition of poetry. In this sense, whether Geoffrey Bawa or Studio Mumbai, they both appear to be making their own architecture by placing themselves in a cultural tradition of architecture and aligning themselves with it as a resource.

But tradition is not the only resource. Just as one can equally find in their practices things like contemporary architecture and contemporary living, one imagines this is also how they have developed in their “historical sense”:

Of course, this attitude is itself so general that to a certain extent it could apply to almost anybody. At such times, we end up seeking out the origins of what is intrinsic in their work, but the rationale for identifying that specificity is nothing more than a kind of accident incited by the situation; if it is an evident possibility that even tradition is not unlimited, it is also futile to seek in that specificity the core of who they are. I think this is the reason behind my confusion during the interview.

What was most interesting for me in speaking with Jain was the moment he connected the approach of Studio Mumbai to the informal slums of India. An architect seeking to impress others through exaggerated statements would not compare his approach to the anonymous practice of the slum dwellers, who strive to improve their spaces by working through their own labor with whatever materials they can find, and whatever skills they possess. Of course, there are multiple contexts in which such an equation would not be easily accepted, but it seems possible that no matter the context, he always approaches it with the same attitude. And if it is acceptable to start from there, then we must also position ourselves somewhere within that opposition.

From TS Eliot, “Tradition and the Individual Talent”

Naohiko Hino is an architect and critic based in Tokyo. He is the principal of Hino Architect’s Office. Since 2006 he has been adjunct lecturer at Shibaura Institute of Technology. Curatorial projects include the internationally touring exhibition “Struggling Cities,” as well as contributions to “Metabolism: The City of the Future” in 2011 at the Mori Art Museum, Tokyo.