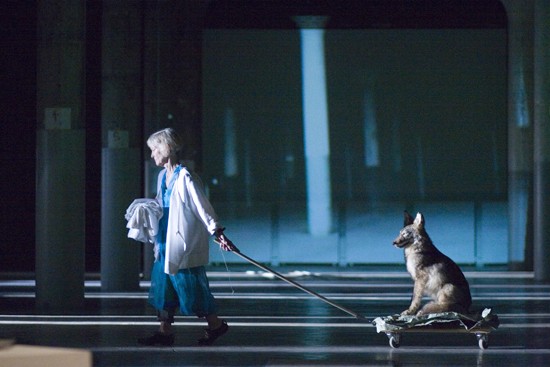 ART iT: You mentioned how when you first came to Japan you were impressed with how different the sounds were here. In your own works the use of sound is so important.

JJ: Well, my use of sound was directly influenced by the trip to Japan. I did the Jones Beach Piece right after we got back, and that’s directly influenced by the clapping of wood blocks in Noh and Kabuki. In this case the clapping measured the distance between the audience and the performers.
I’m very interested in music and always have been my entire life. Sound is the parallel track that I develop in my work. I produce and edit all my own soundtracks with the help of technical assistants and the composers that I work with. I began using very minimal sounds and then gradually I developed more complex sounds and then began to work with composers. The first mirror performances were silent, except for a poem by David Antin that had been recorded and was played back, but it was just one moment.
In Variations on a Scene (1990), with the composer Alvin Curran, I revisited a lot of ideas from the early outdoor pieces. In that performance I made sounds while Curran played electronic music. For a number of pieces I have asked composers to make structures out of percussive objects, so that they can work with them live during the performance.

ART iT: For Variations on a Scene, was the sensitivity to sound something that shaped the performance across the mise-en-scène?

JJ: There’s always a relationship to sound. Often, it influences the performers’ movements. Sound is always an important element for structuring the works. Sometimes I start out with a soundtrack and then work backwards from there, as with Upside Down and Backwards (1980). This is another work involving fairy tales that I made after The Juniper Tree. Sound is material just as an image can be.

ART iT: At the beginning we talked about literary references, like Aby Warburg and HD’s “Helen in Egypt,” and you also made the piece Sweeney Astray (1992) based on Seamus Heaney’s translation of the medieval Irish epic of the same name. In such works, how does text structure the rest of the piece?

JJ: With Sweeney Astray and Lines in the Sand, I read the poems over and over again and chose the parts I liked the best for making a script. But the script only consisted of the text. I then had to develop all the parts in relation to the text. The text is the first layer.
I approach each work in a slightly different way. There’s often a device; for Sweeney Astray I constructed a glass table, six feet off the ground for the actor to stand and perform on. It represented the tree for the King who is turned into a bird. Later, I worked on this piece with a theater group in Amsterdam, but before that I developed it with an East-German actor at Kunst-Werke in Berlin. It was just when this space was starting with Klaus Biesenbach, who gave me a wonderful space on the courtyard there for a month or so. I had a table made of wood with glass, and it was lucky we didn’t have a terrible accident because it was rather fragile. Later the frame was built with steel, but that was where I worked out the part with the glass. So in all the works I go back and forth between the structure of the visual devices and the text. It’s an interaction.

ART iT: Obviously, when you sit down and read a poem or a novel you’re immersed in the text, but all kinds of associations or even distractions come to mind as you read. Would you say your works are also a way to bring that sense of intersection through reading to life?

JJ: I don’t think of it that way, but yes, that’s what happens, basically. That’s what Reading Dante is about. That was a scary piece to do because of how important Dante is to the Italians, and I was really nervous about presenting it in Italy. But I wanted it to be about that process of reading and free association. It was directly involved with what you were just describing. Of course, I’d worked that way from the very beginning without really calling it that or thinking of it exactly in that way. 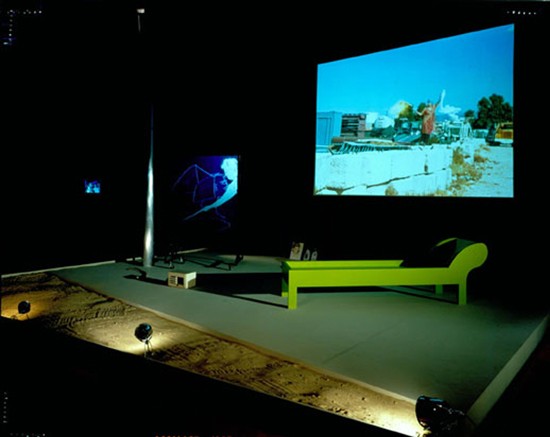 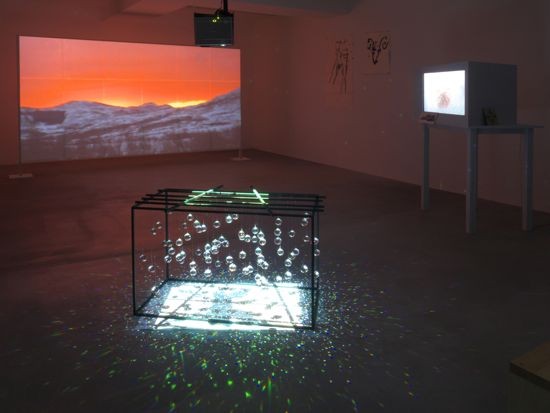 ART iT: Returning to the idea of structure, I think it was with your retrospective at the Stedelijk Museum in Amsterdam that you had to consciously look at the old performances and turn them into installations. I assume that this was a very conscious switch in your practice.

JJ: After the Stedelijk show I simply began to think about my work in that way. It was a big shift in focus from just performances to this idea of having the works exist without me performing live. I found it very interesting to start working with that slightly different problem of space. Now it’s something I continuously think about. The Shape, the Scent, the Feel of Things began as a performance, but Lines in the Sand began as an installation and became a performance, which allowed the installation to develop further.

JJ: Very interesting. I’m interested in other people’s work and go to see exhibitions, but I don’t have time to see that much. I have to stay focused. However, I do see as many of the big international group shows as possible. It’s important for me to be aware of what younger people are thinking about. And I follow the work of the young artists I have known in various art academies. This is a pleasure.

ART iT: You were trained as a sculptor. Do you think of what you do as a sculptural, additive process?

JJ: Yes, in a way I do. Since I started out as a sculptor, right at that point and up until now, I bring ideas of sculpture and space and objects into the performances and installations. So ultimately I do think about it, especially in relation to my props. For example, for Reanimation I made an object with threads of crystals suspended over a video projection. This interests me now.