THE SECRET BORDER IN HUMAN CLOSENESS
By Andrew Maerkle 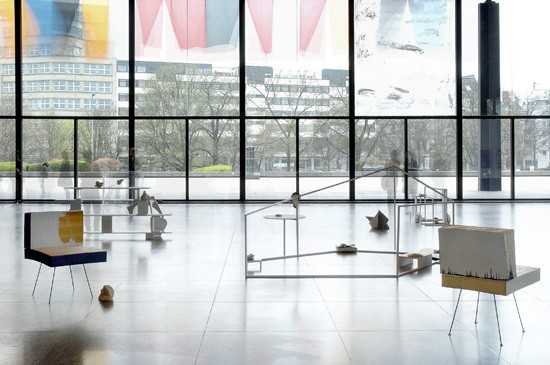 Currently participating in Documenta 13, Thea Djordjadze had her first solo exhibition in Japan in late 2011 at Rat Hole Gallery in Tokyo, where she presented a group of new works made on site over the course of several weeks. ART iT met with Djordjadze prior to the opening of her exhibition to discuss her approach to art making in greater detail.

ART iT: One work of yours that interests me is Der Knacks (2007), the title of which references F Scott Fitzgerald’s essay, “The Crack-Up” (1936), about life as a continual process of breaking down. What did you see in the essay and how does it relate to the work?

TD: I was overwhelmed the first time I read the essay. In the German edition, “The Crack-Up” is presented together with a response by Gilles Deleuze, “Porcelain and Volcano.” This was a powerful combination: both texts address how we are marked by life but simply have to carry on. While I was reading these texts, one day I happened to break a piece which I had been working on and had set out on the floor to dry. The piece completely broke apart.
The process of doing art, or specifically sculpture, is about knowing what you are standing for, and I would never get hysterical about breaking something in the studio, because it is important for me to be calm and to have a kind of mastery over each moment. So the piece was lying there, broken, and I immediately made a new plaster cast to fit the broken parts back together again.
At this point I was not consciously thinking of the essay, but of course I had just been reading about cracks and breaking. I put the piece back together, and it came out very solid, but with a crack in it. So I just banally called it “Crack-Up,” using the German translation of the title.

ART iT: In the essay, Fitzgerald writes that breakdowns consist of “big sudden blows that come, or seem to come, from outside” and then “another sort of blow that comes from within – that you don’t feel until it’s too late to do anything about it.” And it seems that many of your works also have this aspect of either appearing to have been physically broken from the outside, as with this untitled piece from 2005 which resembles a helmet that has been battered apart, or otherwise appearing to be collapsing from within, as though disintegrating under their own weight. You talk about how as a sculptor you are in control, but your works themselves seem to have escaped human control, and been shaped by the elements.

TD: As a sculptor I want to be in control but I also accept things as they are. Things are going to disappear or breakdown, so I try to appreciate them for their fragility and understand the strength that is within that fragility. To understand this can be difficult. Yesterday I was very excited because I had just finished a piece, but when working with plaster you never know when it might crack or not – even with just the slightest movement. So waiting for the plaster to set is an uncomfortable state, and it’s certainly not about control.
What I was saying about mastering each situation is more about taking things as they are, and then in accepting the freakness of accidents somehow gaining control over it as well. It’s ambiguity: we are the owners of our ambiguity. When you are young you think that if you are one thing, then you cannot be another, but after a while you understand you have to allow for both possibilities, or that you are sometimes more one way or more the other depending on the circumstances. 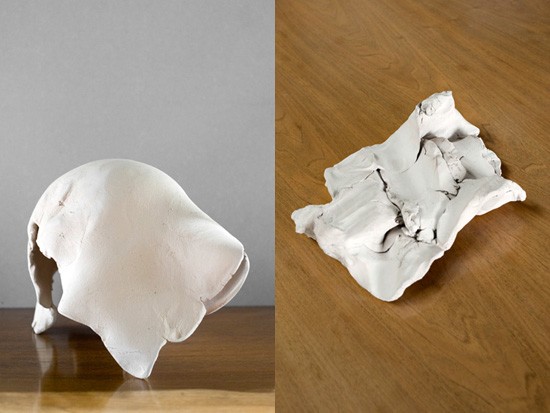 ART iT: Is it fair to describe your practice as a sculpture of breakdown – of disintegration, or rather metabolism?

TD: It’s not just a sculpture of breakdown. It’s a mixture of different things. There’s a distinction between the materiality of a sculpture and the psychology of the person making the sculpture. In terms of materiality, certainly I am attracted to qualities like delicacy, or a special color or texture, but the fragility in my work comes from different things. It’s difficult to explain if you do not understand my process. I want very much for the process of art to be part of my being.
In German we would use the phrase “comes with it.” You are one of my friends, someone else is part of my life, and the art is always there. It has to “come with” any situation. I can be somewhere – a new place – and I need to be able to make art because it is part of my life. But if I worked with things like iron casts and heavy, solid materials, then it would be impossible for art to come with me to different places, because it would be limited to the specific situation where I could work with those materials.
And I’m not talking only about drawing or painting. I need to be able to create. I want art to be a gesture. I want it to be an energy around me. That’s why I don’t like talking about it, because it’s difficult to explain. It’s about personal experience, and it has a lot to do with time: my timing, my interior timing, and why things come out the way they do; it has to do with how I move and how I live.

ART iT: Still, there is an aspect of involuntary processes informing the works, for example in the way that at some point the material itself decides the appearance of the sculpture, or the sculptures decide themselves, as opposed to being determined solely by the intent of the artist.

TD: With some sculptures I go to a metal works for fabrication. Usually what happens is I book the appointment 10 days in advance, and I know that once I get to the metal works I will have to decide on the spot what kind of iron to use, and I know that the metal workers will need a sketch of the idea I have in mind, but despite knowing in advance and having all that time to prepare I end up doing the sketch on the bus as I’m heading to the appointment, not before.
It’s not that this is the only time I’m thinking about the work – I’m constantly thinking about the work – but this sense of urgency is what motivates me. It makes me do impossible things. Maybe it’s because of the adrenalin, but I am always the most focused when I’m sitting in a very loud, messy bus doing my sketch on the way to the metal works.