II. Mirror-Void-Other
Kimsooja on the performance of non-action. 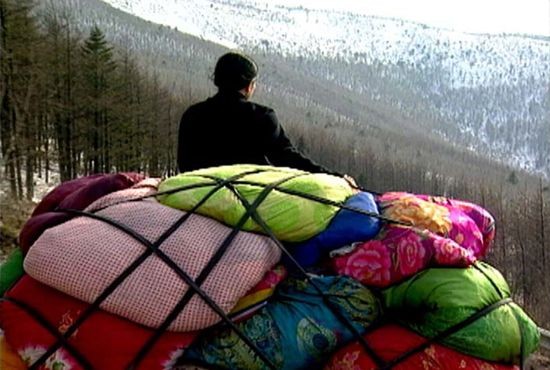 ART iT: We were just discussing your understanding of the dynamic between globalism and locality, particularly with regard to your performance videos for A Needle Woman (1999-2001/2005). Your work is often discussed in terms of displacement. Is there any place to which your works return or come home?

Kimsooja: I tend to work on the move, mostly while I’m traveling. For the works themselves there is no sense of “home.” The context changes each time they travel. When the same performance piece is shown in India it is different from when it is shown in Peru or Kenya. It elicits different connotations from the viewers, and in response to each specific time and geography.
I don’t intend to make displacement a theme in my work but the constant nature of moving from one place to another in my life automatically creates that phenomenon. Also, the notion of displacement is already there in bottari making. As a physical container of bodies, memory, history and society, the bottari holds together many different notions of time, space, culture, society and gender, but at the same time it is also made with a single piece of square-shaped fabric, so formalistically it’s a transformed painting that becomes a three-dimensional sculpture the moment you tie it up with a knot.
It was from this formalistic aspect that I first began working with bottari, and then in 1993 when I returned to Korea from my residency at PS 1 in New York, my interest evolved towards more personal, social and cultural significances. I was able to see my own culture and society differently after my stay in New York, and this created a different reality that could offset the formalistic aspect of the work.
The notion of displacement in the bottari also relates to time. The bottari is a container of different tenses – the past, present and future – which are collapsed together all at once the moment I wrap it up.
In a way, the presence represented by the bottari can also be represented by the artist’s body, which is similarly a container of all those problems. Maybe I’m unfolding them through my relationship to the nature and humanity of each city. For example, in the first version of A Needle Woman (1999-2001), I visited all the major world metropolises, but in the second version (2005) I went mainly to cities in war zones or to those that were sites of political and religious conflict. I visited Havana and Rio de Janeiro in order to witness issues of post-colonialism, exploitation and violence. I went to Patan, in the Kathmandu Valley, while a civil war was taking place, and it was a very dangerous moment. I wanted also to go to Afghanistan and Iraq, although ultimately it was too risky and I didn’t want to gamble my life to that extent. But these were some of the symbolic locations that drew my attention at that time.

ART iT: Regarding the similarities between the bottari and the body, one thing that interests me about your works is posture. It’s incredibly difficult to stand or sit still for any amount of time. To do so, your body has to assume almost architectural qualities. Is posture something that you’ve thought about over the years – not just the body itself, but also the shape of the body and the mechanics of how you hold it up or lay it down?

Kimsooja: In fact, even to stand still can be a production. When I did the first A Needle Woman performance in Shibuya I had to learn right at that moment how to stand still and how to breathe and be grounded. I had never practiced any meditation or yoga, but because of this urge that drove me to do the performance, I was able to start learning meditation practice on my own. In order not to move my shoulder, I had to learn how to breathe from my stomach, as I could only move horizontally. In order to be grounded, I had to stand solidly and rigidly, but also had to find a way to relax in order to maintain my circulation over the course of the performance. The only thing I could do was to order myself to relax my head, relax my left shoulder, relax my feet, relax my neck – and it worked. I learned to circulate my own body by practicing this performance. Looking at it, I see the body, as you say, as an architectural element. I see it very objectively rather than identifying with it.
The idea of a standing performance also developed from my awareness of and reaction against the aggressive and violent exposure of the self that often happens in performance practices in history. I was very aware of that, and I wanted to create a performance that is nonviolent that could show more by doing “nothing.”

ART iT: In Chinese philosophy there is the concept of “wu wei” – acting without acting, a kind of non-expression or non-action. I think this concept is fascinating to explore further in an art context.

Kimsooja: In my performances, non-expression often creates a measure or barometer for understanding the other, similarity and difference. In A Needle Woman, viewers see the same performance of non-action taking place in all these different cities, and then become aware of the clear distinctions between the behavior of the people in the different cities and the different landscapes. After a certain point the viewers tend to forget my image and begin to see what I am seeing. My body begins to function as a void that is replaced by the bodies of the viewers, allowing them to experience each performance in each location. I think it would be very different if I excluded myself and showed only the cityscapes with people. There would be no entry point for viewers. 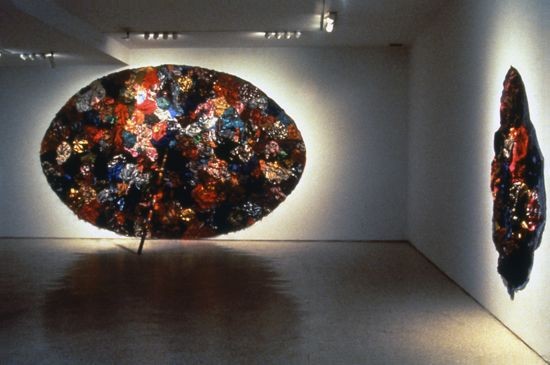 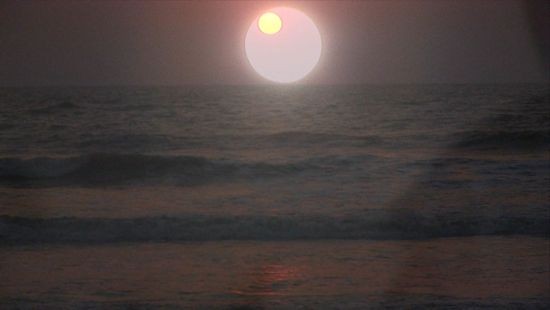 ART iT: You’re both the needle and the fabric?

Kimsooja: I am both the needle and the bottari. There are all these folding and unfolding processes going on in my art and mind and body, but also through my gaze and the relationship between my body and the people and the world, there is this other dimension of a needle that is weaving together different societies, geographies and cultures. I feel that my body becomes an axis of time and space. However, the first version of A Needle Woman was filmed in real time, and shows more of the axis of space than of time. The second version was filmed in slow motion, so it emphasizes the comparison in time. The people moving in slow motion appear to engage more sensitively and personally with my body, but at the same time my body, as a zero point of time, becomes an extended zero. What is that time? That is my question.

ART iT: It’s like you are constructing a series of mirrors.

Kimsooja: I have worked with mirrors on several projects since 1999, but it was while I was preparing my solo show in 2008 at Shiseido Gallery in Tokyo, “A Mirror Woman: The Sun & The Moon,” that I realized the mirror is also an unfolded needle. My work dealing with nature unfolds as an extended fabric, while the needle is an extended tool of the human body that signifies the nature of humanity. Everything to do with the relationship between the needle/body, fabric/mirror evolves from my earlier pieces. In fact, the motivation behind my earlier work with sewing came from an awareness of the mirrorical aspect in painting. As a painter, I had always questioned problems regarding the surface of the canvas. I think the painter’s life is all about wandering onto the canvas searching for different methodologies of producing one’s own mirror. The notion of the mirror and one’s identity has always been there, transformed through different media and methodologies.

ART iT: One of the major issues that we will continue to face in the future, and which we’ve already been dealing with for past centuries, is how to deal with the other. Maybe your way of dealing with this issue is to put yourself in the place of the other, rather than that of the self?

Kimsooja: That’s very true. It’s an interesting perception. The artist’s main subject somehow is based on the self and the other. The confrontation with the canvas is always about how to deal with the other and how to project oneself. But I want to expand that issue to communication with the other, and embracing the other, and, finally, reaching a ground of oneness. This is an issue that ultimately everyone has to face. 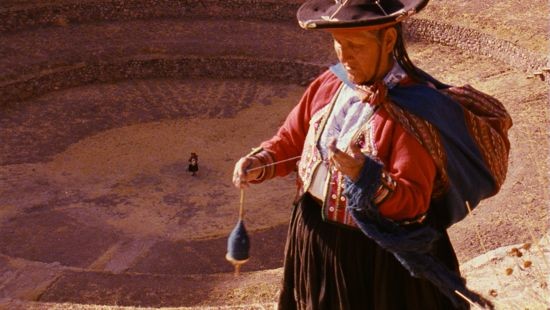 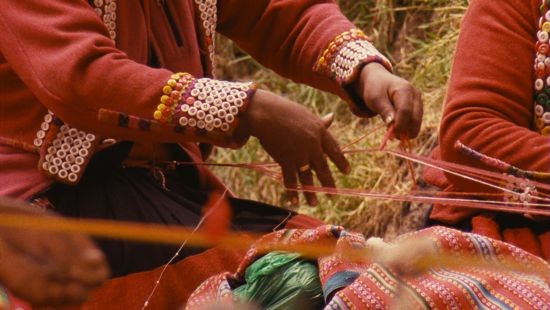 ART iT: Now you are working on a new project called Thread Routes (2010- ). In conclusion, can you explain about how this project relates to your earlier work?

Kimsooja: Compared to A Needle Woman, the Thread Routes project is all about searching for the questions and roots of threads in an anthropological approach. It focuses on weaving, lace making, knitting and spinning – all actions with threads – in relation to the geographical, agricultural and architectural structures in various regions around the world. One inspiration for this project came from a visit to Bruges, where I saw a lace-making woman in the street, and immediately connected the structural and performative element of this action with local architectural practices. I began filming in Peru as the first chapter to this project. There, I juxtaposed different weaving communities’ performances with the local landscapes, as well as architecture and archaeological structures. It was my first time shooting with 16mm film and I discovered a more special relationship with the camera than when I use digital film.
“Thread Routes” is a retrospective project in that I am looking back at my earlier sewing practices up till now, searching for the structural, cultural and psychological roots of my own interest. I will continue to film in Bruges, Burano, Croatia, Prague and Alhambra. I also can’t help thinking of countries in the Middle East that have strong decorative architectural elements. Other locations include Mali and Rajasthan in India, where there are clay houses decorated with circular mirrors, which also recalls the Indian tradition of fabrics decorated with mirrors. I also plan to film the weaving culture of the Miao people in Sichuan, who have a unique garment tradition of pleated skirts that to me seems to be strongly related to their agricultural cultivation using mountainside terraces and the layers of traditional architecture that are built along the local landscape. Then there are also traditional Japanese stone gardens – the structure of which I can easily relate to weaving. Native American archeological sites are another planned location.
I’m also working on a site-specific commission by GSA that will take place right on the US-Mexico border in Arizona. I am making a video piece using a LED screen right on top of the first gate for entering the US, addressing the political problems and violence that occur with immigration and drug trafficking issues in the Mariposa Land Port of Entry. Again, this is a very delicate and vulnerable location with which to deal.