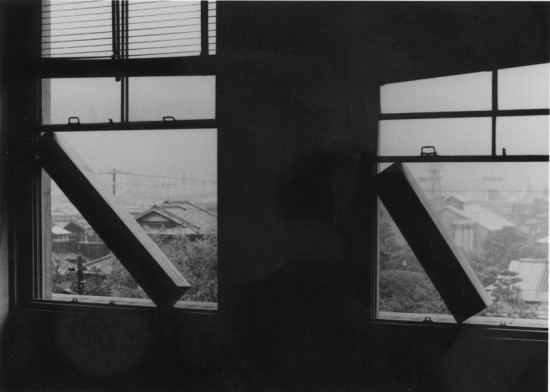 ART iT: Let’s continue with the idea of sculpture’s role in the age of information and virtualization. At the start of your career you wrote extensively on the opposition between “concept” and “thing.” Can you explain what led you to start thinking about this opposition?

KS: To say the least at the time I was uncomfortable with the idea of using images and the imagination as a basis for expression. In both painting and sculpture, artistic expression had come to revolve around the image as illusion or fabrication – as something conceived in the mind. But I questioned why it was necessary to build up a mental illusion at the expense of all the real things already at hand. I made it a point never to use words like “imagination” or “image.” Certainly I used the word “conceptual” in my writings, but only with reservation. Instead, I was mainly concerned with the word “thing” (mono) as a term for a certain kind of existence or being.
In what way do “thing” and “thing” or “person” and “thing” touch? Viewed from the human perspective, there is an ideal or conceptual perception of any situation. But relationality or interdependency exists at the point where that perception coincides with physical contact. My idea is that it’s not that one side is entirely dependent on the other, but rather that a “thing” becomes possible when both sides are equally dependent on each other. Autonomy is possible insofar as there is something preserving and supporting that autonomy.

ART iT: In that sense would you say your installations, as situations, are both non-representational and non-conceptual?

KS: Yes. What I just referred to as that which supports interdependency could be understood as situation, but at the same time it is expanded situation. In other words it’s not only the situation of one rock, it is the creation of an entire space in which multiple situations coincide with each other. In order to produce a situation, you have some thing “A,” and in order to produce a different situation you have some thing “B,” and to produce yet another situation you have thing “C,” and each of these things and situations has their own qualities. What links them all together is intellect operating in tandem with action.

ART iT: Why did you feel it was necessary to produce non-conceptual works?

KS: I am an artist, so I necessarily must make things. In that sense I have never once thought to have a life beyond art. Art fills my head from morning to night. I am constantly thinking about how to maintain my interdependency with things and what kinds of reality to produce through those relations.
And as things grow so big that they become spatial, my interest turns to how to maintain my relationship with space, and what kind of mutual realities are possible from that relationship. As enjoyable as it is to think this way, it is also my life entirely.

ART iT: Considering your activities to date, what surprises me is that you actually seem to be quite accepting of the idea of the “frame.” Is this partly because you were in fact already working outside the frame of the gallery space when you made your early outdoor events and installations?

KS: For me, the “frame” is the visualization of the margin or boundary. Because human cognition is highly responsive to form, I like to first present a form, which I then destroy or splinter apart. That’s why I only use basic forms like rectangles and circles. In this way scale and margin become boundary markers. Once everybody recognizes the boundary, then I destroy it. It may initially seem pointless, but dismantling something from within the field of cognition allows everybody to perceive the situation.

ART iT: For that matter, the frame of the gallery itself has evolved since you started your career. For example, the rental gallery system that prevailed in the 1960s and ’70s must have had a specific economic and spatial relation with artists in a way that differs from that of the representational gallery system of today. Have these changes in the relations between exhibition space and artist had any effect on your practice?

KS: I think it has had an effect. With the rental galleries, paying from our own pockets we would more or less temporarily own the space, and could do whatever we wanted there. However, this didn’t mean that we could realize the full extent of our ideas, because we were completely left to ourselves in terms of managing the space and organizing the exhibition. So there was no critical support from the galleries, although in the 1970s there was a prevalent, mutually responsive discourse that shaped artistic practice. People really came to the galleries to have discussions, and particularly on Saturdays there would be gatherings with everybody excitedly speaking about what could have been done better or critiquing the work. This in turn inspired artists to come up with something else for the next exhibition. Now it seems that things are much more subdued, to the point that I almost wonder where I could go to test out my ideas – although of course I’m fully capable of polishing them myself.
But I also think there is a zeitgeist, an orientation that shapes the general interest in things and ideas, or a general inclination within a given social situation. The 1970s, ’80s and ’90s all had their distinct proclivities. At first there was anti-formal practice, and then in the 1980s there was a revival of form, but that gave way entering the 1990s to the spread of appropriation, with less of a critical emphasis on originality as such.
This is the evolution as I see it, although I’ve always maintained my own way of doing things. If there is something that I absolutely must do then I accept no compromises. It’s not that I disavow new trends or influences – indeed there are times when I respond to them – but neither am I controlled by them. There is still some constancy upon which I base my practice. No matter how much time passes, or how surface-oriented signifiers and concepts change, I have a groundwork that continues to support me. And art itself, as expression, is rooted in that groundwork, and stands upon that groundwork.

ART iT: Yet even by today’s standards you were internationally active from a relatively early age, already appearing in the Biennale de Paris by 1973. Did such opportunities to exhibit overseas also affect the development of your ideas and perspective?

KS: Certainly. Ultimately there are things that you will never understand if you do not leave Japan. For example, you might never realize that even the same thing might be used differently in different countries. Or you might never realize that even with a given situation, we in Japan approach it one way and people elsewhere a different way. In Paris when I used the steps leading to the Musée d’Art Moderne for an “action” with cement, cinder blocks and gravel, passersby were incensed, and demanded to know why I was carrying out construction there. That was a striking lesson in differences in worldviews and perception.

ART iT: To that extent, are each of your works then rooted in a specific cultural setting?

KS: Yes. The average “thing” that gives shape to the everyday world of society and culture is not a priori a thing of art, and rather exists as something that people regularly use. Then when I come along to work with that “thing,” others might object that it should not be used in such a way, that to do so is disruptive. So there is a vast divide between the epistemologies, say, of a formative or sculptural world and the everyday world that people inhabit. But rather than throwing up one’s hands at the situation, one of art’s vocations is to make that divide apparent, and turn those differences into a rationale that expands the potential for all kinds of perception, on the part of both artists and regular people.

ART iT: Had you already developed this thinking by the time you went to Paris?

KS: Yes. The ideas that informed Mono-ha were already in place once we started thinking about the realities and identities of “things.” The approach of Mono-ha was that rather than considering them as “media,” artists had to confront “things” as things in themselves, and then build upon the implications that generated. And, indeed, at the time this was an important issue not only for artists but also for all kinds of other people. Perhaps there is some kind of common awareness that links the Japanese together, just as surely there is something that connects all French people or all English people, and those commonalities must necessarily include how we deal with difference.
But when I went abroad it was difficult to focus all my energy on the work itself, because there were mutual doubts about what the other was thinking, and due to differences in mentality, what I thought would be good was ultimately completely misunderstood.

ART iT: So for example was the identity of the metal pipes that you used for one of your other installations in Paris different from what the same or similar pipes would have had in Japan? Or was it the act of making the installation that was different from when in Japan, as opposed to the materials?

KS: It was all different. Due to differences in the mentality toward materials, I think that whatever I did would have been misinterpreted. Seeing the pipes arranged on the steps outside the museum, people didn’t know how to respond. But in verifying these differences one by one, the final work began to emerge, and we could each come to understand the differences between our worlds. That’s what art can do. At the very least it can help expand the scope of consciousness. It is absurd to think that the social significance of things would not change from culture to culture, just as the values of the 1970s and today are also completely different.

ART iT: You previously said that when you went to the Venice Biennale you felt there was a certain kind of work that was expected of you. Having gone to Los Angeles for the Mono-ha exhibition held at Blum & Poe Gallery this February, did you have any similar sense of expectations with regard to what you planned to do? In such cases, how do you balance pursuing your own interests against responding to expectations? Aren’t expectations an aspect of responding to site?

KS: Art is not something that can be produced with someone looking over your shoulder. No matter how small the project, at some point as an artist you have to make your own decisions. Yet often at international exhibitions you encounter regulations on how or in what way to use things, and such external restrictions necessarily end up reflected in the resulting work. If you are not able to turn such negatives to your advantage, then you won’t be able to realize a true formative practice. So no matter how strange the place or thing, I can always make do with it, because I have developed my own discipline. This time in Los Angeles I made a work with some lumber and leftover wood blocks. It took me a day to finish.