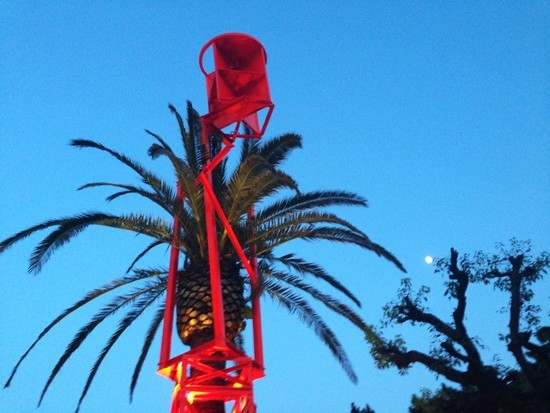 ART iT: What is your approach to making sculptural works?

SO: Even in 1988 when I made my first sculptural work, I was aware that I was assembling objects as they were. In that sense it’s similar to my thinking about “Zyapanorama.” When I started sculpturally combining preexisting objects based on their forms, it opened a completely different world for me. At first I actually wanted to make sculptures from scratch, but it just didn’t work. But then in Uwajima [a port town on the island of Shikoku], someone gave me a boat. I disassembled the boat and then arranged the parts without altering them otherwise, and these became my first sculptures.

ART iT: You said that “Zyapanorama” is a kind of collage, and in its broad sense, you apply this idea of collage as “recombination” to your sculptural works as well. Would you say this extends to large-scale projects like the Naoshima Bath I♥湯 (2009), and the installation, Mon-Cheri: A Self-Portrait as a Scrapped Shed, made for documenta 13 in 2012?

SO: I don’t think they can be adequately described simply as assemblage, but such works certainly incorporate a collage approach. I don’t think of projects like I♥湯 and Mon-Cheri as architecture. There was no final plan for them. We made the basic structure, and then built the works up with materials that I encountered on site. As opposed to conventional architecture, for which one would construct a building from the ground up using new materials, the bathhouse was an assemblage of whatever was there. The most extreme manifestation of this is the Mon-Cheri project. The only thing I knew in advance of starting the work was that it would be installed in the Karlsaue Park in Kassel, that it had to incorporate a pre-fab house, and that I wanted to place a book inside it. I brought the book with me from Japan, but everything else was made with things that I procured in Kassel. Yet since I had never spent an extended amount of time there, and had a preconception of Germany as a clean country with strict regulations regarding environmental protection, I assumed that I might not be able to find what I needed to make the work, although in the end it wasn’t a problem – you can find junk anywhere you go.
It’s just that, in order to find the right junk, you need to meet the right people, so the two local staff provided to me by documenta were especially important, because if you ask for “scrap-metal plates” and they don’t share the same image of what you’re looking for, then you get stuck or you drift away from the spirit of the work.
I was worried about overcoming the language barrier with a German person I would be meeting for the first time, but in the end I was fortunate that everything went smoothly. Since we only had about two months to work on site, having someone with a shared sensibility was a major help. 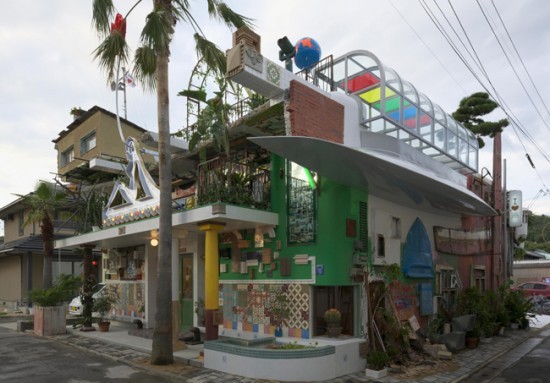 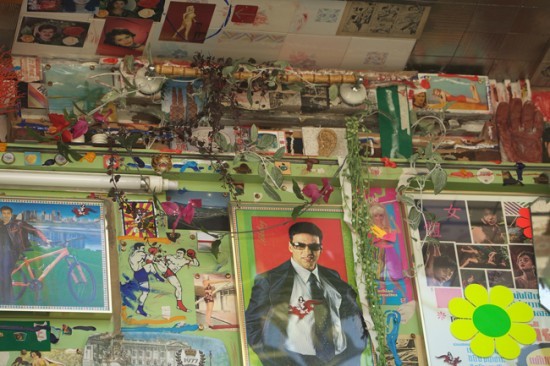 ART iT: I heard that you only had little more than a year to prepare after being invited to documenta. There must have been many decisions that you had to make under tight time constraints.

SO: The invitation to participate in documenta actually came right after the disasters of March 11, 2011, and there was a lot going through my head at the time. Seeing that kind of event, I had the feeling that it was the definitive end to a historical current in Tokyo – the city where I was born and raised – that had continued from the Meiji Restoration (1868) to the present. I strongly felt how, even in light of the concerns over radiation, the universe moves beyond the sphere of human influence, and how the world in which we live can be so simply destroyed, and, to put it in a Buddhist way, is constantly changing. But since I myself am not a victim of the disaster, and can only view it from outside, I never thought to make it the focus of my work. On the other hand, the disaster and the invitation to documenta were intertwined, and feeling completely displaced, the only thing I could do was keep moving forward. It was a situation where there was no leeway even to say that I could not make the work, and no way that I could question myself about what I could do.

ART iT: What was so impressive about Mon-Cheri is the way that you turned the standardized pre-fab house into something completely unique. Even though they are a standardized product, because the pre-fab houses do have some kind of presence, for some artists the works seemed to be swallowed up by the houses, whereas your project really stood out.

SO: I was really excited by the pressure of doing a large-scale project outside of Japan, in Germany, and on top of that for documenta, and maybe the local people who worked with me were also swept up by that feeling – although of course at first there was a process of feeling each other out.
But aside from that I really had no consciousness of being in Europe, and could probably have produced the same work had I been in my studio in Uwajima, and indeed produced that kind of work.
I had the siren from Uwajima and put up signs in Japanese, and then I didn’t think about Europe or documenta while I was working. As for playing the Japanese songs, more than reflecting some kind of consciousness of Japan, it’s just that even when I work in Japan that becomes part of the natural flow. So in both content and production method it was extremely important for me that the work should not be overly concerned with the Western context.
In producing a work, if I try to blend in with the environment and context where I am working, then I lose sight of myself. And even if that were to elicit a good response, I would still be aware that it was a result of compromise.
So when those alternatives come up you can lose sight of what is important. In order to have a sense of principle, no matter where you are you have to make work honestly, and then if it’s not appreciated, that’s that, and if it is appreciated, then you can see that it’s touched upon a shared sensibility. 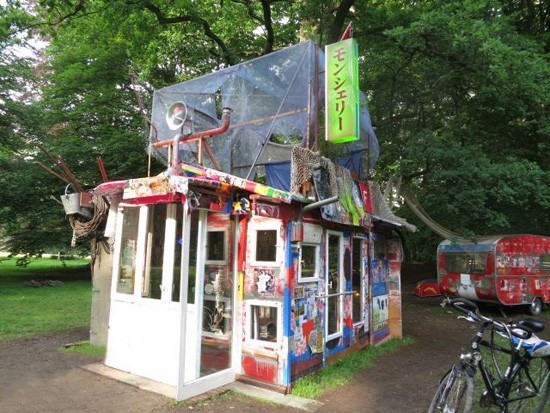 ART iT: In that sense your project for this year’s Venice Biennale was not produced on site, but did you still get something out of the experience?

SO: In the beginning my basic stance toward the Scrapbooks was that I would paste together all kinds of printed matter based on my own sensibility. Of course it is impossible to really deal with all kinds of printed matter, but I picked things out based on my own sensibility, and pasted them all together.
Then in my 20s what I felt strongly was that in painting and drawing, even before concept or technique, it’s necessary to feel some kind of love for the materials themselves, like paper and pencil. If you feel some affection for the paper then something can happen there. If you think that it’s only paper, and you can buy it in bulk and keep throwing it out, then you forget how precious even one sheet of paper can be.
It’s similar to the case of the Scrapbooks, where I feel that a love for the objects is necessary to produce the “density” that I’m seeking in the books. Here in Venice, there are many works that emanate just such a love, and I’m thankful to have the opportunity to exhibit in such a place.
Regardless of the fact that making work with love is one of my fundamentals, there is also a part that has worn away, and I was reminded of this in Venice.
Maybe some people who see my work will think that it’s nothing more than junk, but there are times when an encounter with something that is widely considered to be “junk” can incite an incredible creative drive.
Maybe the question of how to help those things that I’ve collected through such encounters achieve their fullest potential all depends on that momentary love.